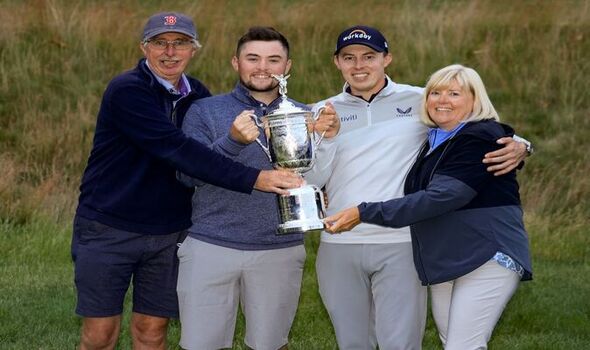 Alex Fitzpatrick, 23, then had to get straight back on a flight to catch the glorious moment, after discovering the tables had started to turn.

Sheffield-born Matt went on to claim a famous victory, becoming just the third Englishman in 52 years to win the sport’s second oldest major.

He was then swamped by his tearful and ecstatic family on the 18th green at Brookline, Massachusetts.

Alex, who is also a golfer and lives in North Carolina, told how he nearly missed his family’s big moment. He said: “He was six back, five back of the lead and, when I landed, he was tied.”

He said he texted his manager to get him on the next flight to Boston, adding: “I couldn’t be happier I spent that money to come back.”

Alex said the only better feeling would be if he had won, saying “but this is as close as it gets”.

Matt, 27, beat world number one Scottie Scheffler and Will Zalatoris in a nail-biting battle that went to the final hole.

He finished on six under par to win by one shot.

The champion said: “It’s what you grow up dreaming of. It’s something I’ve worked so hard for, for such a long time. I’ve got to give myself credit. I had so much patience.”

The humble Sheffield golfer visits children being treated for cancer at his local hospital and helps raise funds.

Matt, from the Ranmoor area of the city, has been a patron at Sheffield Children’s Hospital since he was 22.

The down-to earth golfer goes to the hospital when he can and donated more than £75,000 to buy a scanner.

He also keeps tabs on his beloved football team Sheffield United and has struck up close friendships with members of the United squad. The lifelong supporter said he felt like an underdog, just like his team.

He said after his win: “Not to compare it to my football team, but I feel like I’m the same deal, as I’m not expected to do well, not expected to succeed, and I’ve won a major today.

“I feel like I certainly work hard for it and that’s kind of where I’ve come from, that’s the mentality of everyone around there.

“It’s not upper class at all. It’s certainly an underdog mentality and you work hard for what you get.”

He added: “I can retire a happy man.”