Home » World News » In the Amazon, an indigenous nurse volunteers in coronavirus fight

In the Amazon, an indigenous nurse volunteers in coronavirus fight

MANAUS, Brazil (Reuters) – Vicente Piratapuia, 69, of the Piratapuia tribe had a high fever and could hardly breathe, but he refused to leave his home on the outskirts of the Amazon rainforest’s biggest city. 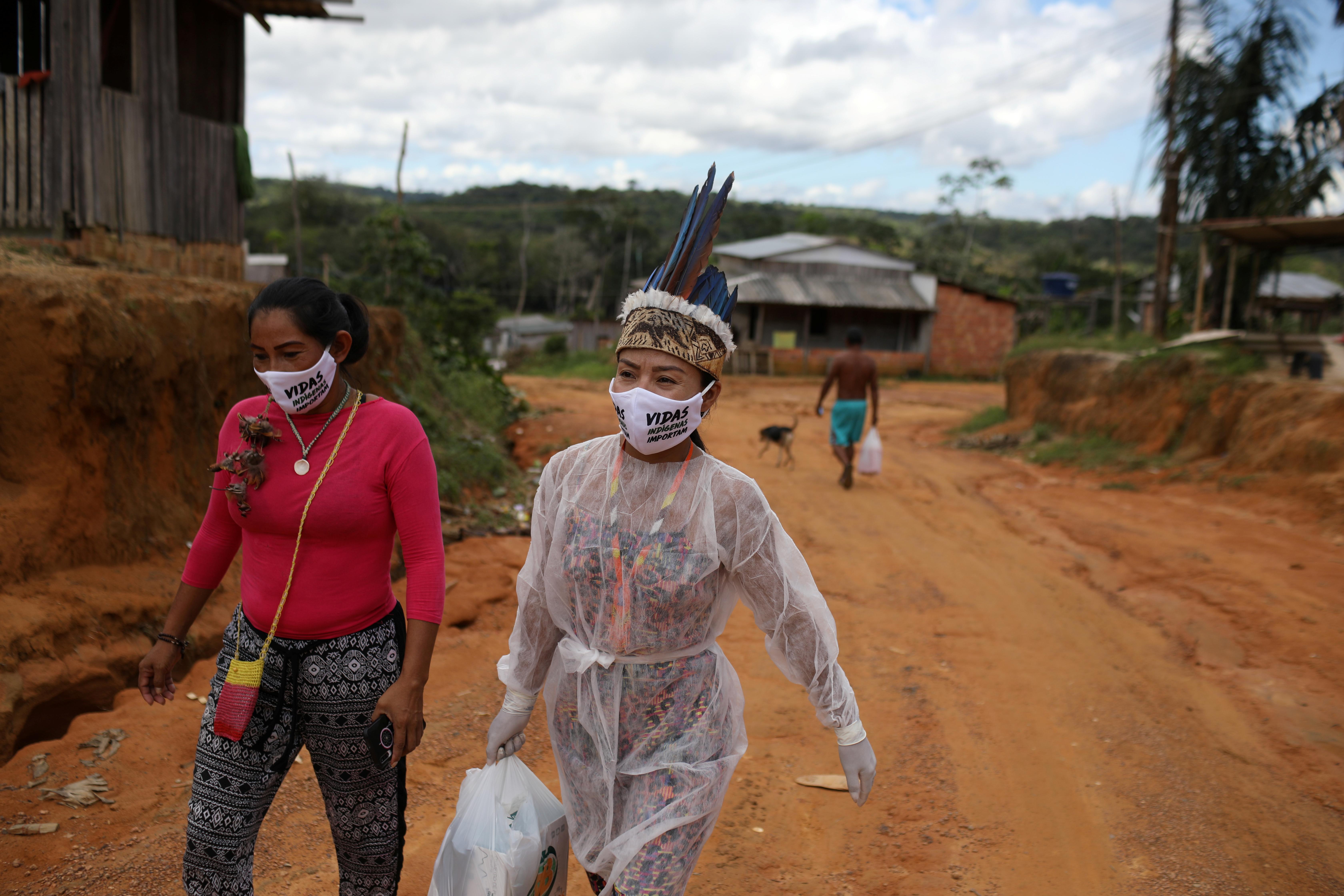 It took a stern word from a trained nurse in his community to convince him he would die if he refused a ride with her to the emergency room.

Vanderlecia Ortega dos Santos, or Vanda to her neighbors, has volunteered to provide the only frontline care protecting her indigenous community of 700 families from the COVID-19 outbreak ravaging the Brazilian city of Manaus.

It is an uphill battle. The ramshackle settlement of descendants from 35 different tribes, called Parque das Tribos, lacks plumbing and electricity in most homes.

Ambulances regularly refuse to pick up the seriously ill because there is no public health clinic nearby.

As the coronavirus pandemic has begun spreading across Brazil, indigenous people who live in and around cities have been caught in a dangerous limbo. The country’s indigenous health service, Sesai, focuses its resources on those living on tribal reservations.

Sesai has reported 10 indigenous deaths from the pandemic on native lands, but indigenous umbrella organization APIB estimated this week it has taken the life of at least 18 indigenous Brazilians if fatalities in urban areas are counted. The real number of cases in often remote villages across Brazil’s vast hinterland is difficult to ascertain.

“Our people are dying from this disease here and they are not being recognized as indigenous people by the state and Sesai,” said Vanda, a member of the Witoto tribe from the upper reaches of the Amazon river on the border with Colombia.

A spokeswoman for the mayor of Manaus said indigenous health was a federal issue and not the responsibility of city hall.

Manaus, the state capital of Amazonas, which is suffering Brazil’s most deadly COVID-19 outbreak per capita, has seen the disease overwhelm hospitals, cemeteries, and officials’ ability to tally the dead.

Vanda, 32, was born in the river village of Amatura and moved down river 10 years ago to Manaus, where she trained as a nurse technician. She works treating skin cancer patients at a clinic in the city.

But since the outbreak started she is using her free time to make house calls in her community, tracking potential COVID-19 symptoms through a WhatsApp group she set up.

This week she has been monitoring some 40 suspected coronavirus cases. She referred five people in serious condition to emergency services, including an old woman who had to be taken by car for lack of an ambulance.

Vanda gives her patients painkillers and other basic medicines, while offering guidance on limiting contagion. She makes house calls wearing a protective apron, gloves and mask – sometimes under a traditional Witoto headdress of macaw feathers.

Hunger arrived in the community before the virus, she said. Social distancing measures imposed to slow the outbreak have hammered the local economy and wiped out incomes for both the women who make crafts or work as maids in Manaus homes, and the men who labor on building sites.

“Because we were so devoid of public assistance, I took the initiative to start a campaign on social media to receive donations of food and hygiene kits,” Vanda said.

She also started a workshop at her mother’s house where women sew cloth masks for the community, turning out 30 a day on one sewing machine.

When Brazil’s health minister visited Manaus this week, Vanda and two of her friends greeted him with a protest outside the city’s main hospital, demanding medical attention for indigenous people.

She and two other women wore masks made by her mother, emblazoned with the phrase “Indigenous Lives Matter.” 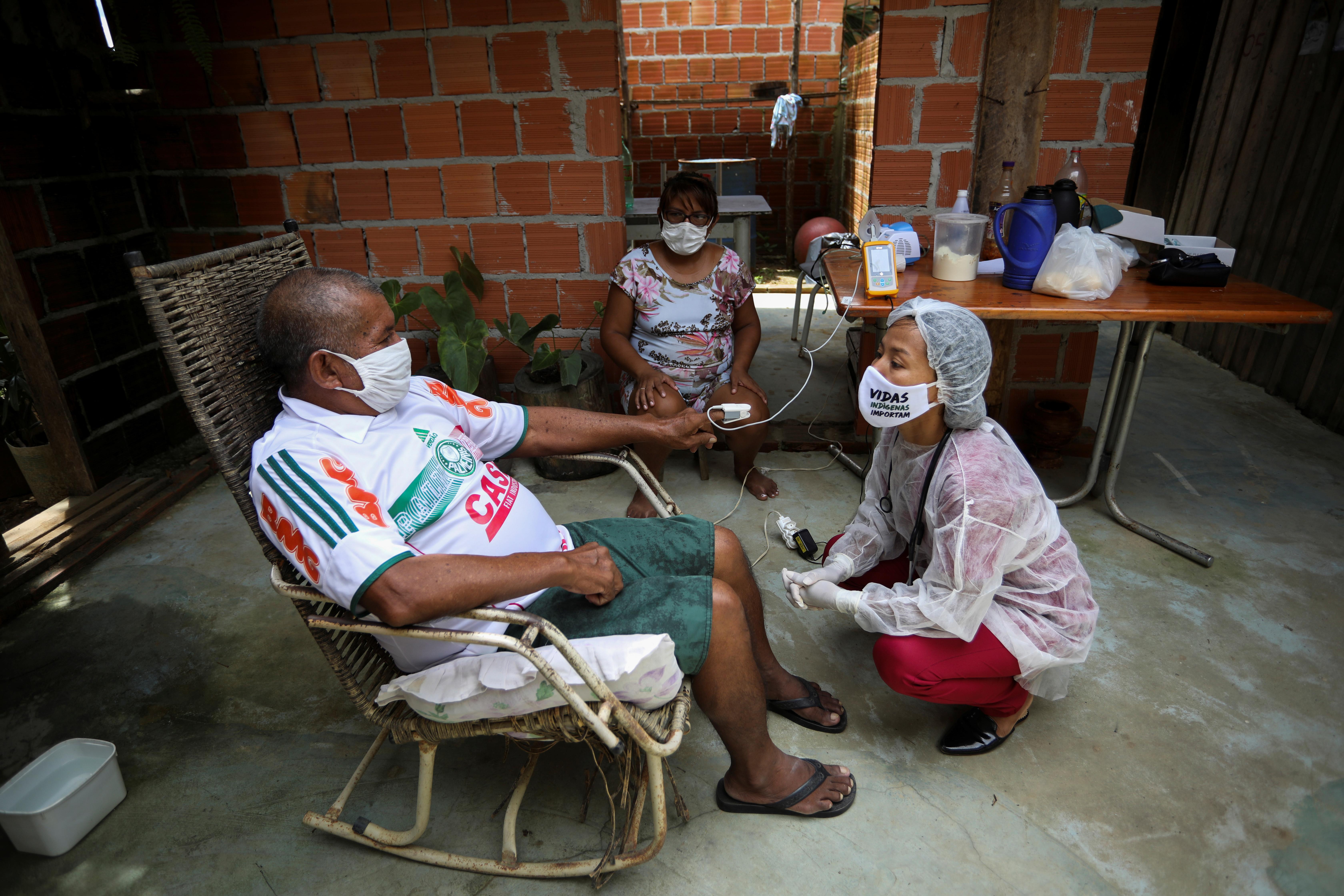 The demonstration prompted a meeting with Sesai head Robson Santos da Silva, who said a field hospital in Manaus promised by the federal government would have a wing for indigenous patients with the coronavirus.

However, a ministry spokesman said construction of the field hospital would have to wait while the government focuses first on expanding existing facilities in Manaus.