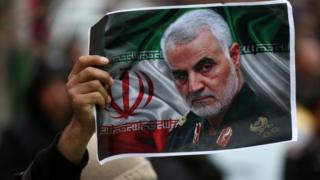 Iran has executed a man convicted of spying for the CIA and Israel’s Mossad intelligence agency.

Mahmoud Mousavi-Majd was accused of reporting on the movements of Iranian forces in Syria and of spying on the Revolutionary Guards commander, Qasem Soleimani.

Soleimani was killed in a US drone strike earlier this year.

Last week Iran executed a former defence ministry employee convicted of selling information to the US.

The Iranian judiciary’s official news agency Mizan Online said that Majd’s death sentence “was carried out on Monday morning over the charge of espionage so that the case of his betrayal to his country will be closed forever”.

Earlier this month a spokesman for the news agency said the former translator had been sentenced to death for spying on “various security fields, especially the armed forces and the Quds Force and the whereabouts and movements of martyr General Qasem Soleimani”.

The spokesman, Gholamhossein Esmaili, said Majd had been found guilty of receiving money from the CIA and from Mossad.

The judiciary said in June that Majd was arrested about two years ago and was not directly involved in the attack on Gen Soleimani. Some Iranian news agencies reported that Majd had been arrested by the Lebanese Shia Muslim militant group Hezbollah and extradited to Iran.

Majd’s execution comes days after that of another Iranian convicted of selling information to the US. Mizan Online said Reza Asgari had passed on details of Iran’s missile programme to the CIA after retiring from the defence ministry’s aerospace division in 2016.

Last July, Iran’s intelligence ministry said it had arrested 17 people accused of collecting information on the country’s nuclear and military sectors for the CIA. The ministry said some had been sentenced to death but did not name them.

US President Donald Trump dismissed that announcement as “totally false”.