In new footage released on Wednesday, the Islamic Revolutionary Guard Corps Navy (IRCG) displays the bunker, which is purportedly mainly located underground. The facilities, which were officially inaugurated in a ceremony, also feature various silos which contain ballistic missiles.

According to a journalist who shared the video on Twitter, the missile storage “includes cruise and ballistic missiles”.

According to Iran’s military, the installation boasts security against electronic warfare attacks.

Earlier this month, war fears skyrocketed when Iran militia groups claimed to have active “resistance cells” set up in Washington and other US locations. 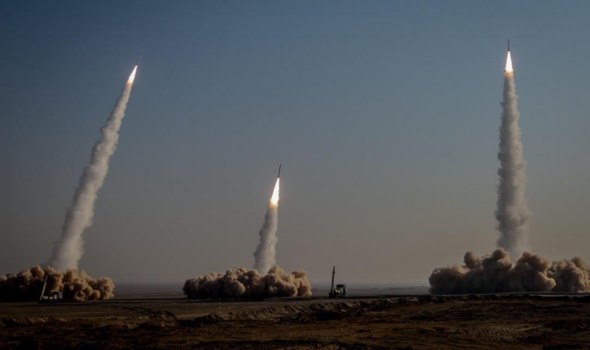 Posts in the online forum Kawtheryoon Electronic Team, used by Iranian militia groups, claim that Iranian “resistance cells are rooted even in America and its capital”, according to the Middle East Media Research Institute.

The post also claimed that terror contingents connected to Iran are obtaining more support as it urged the US to pull out all of its troops from Iraq and the Middle East.

According to the Middle East Media Research Institute, the statement also included an image showing caskets of US soldiers and a “resistance fighter” watching over rockets being launched over a city.

The body said the translation for the statement read: “The axis of resistance today is stronger than before.

“Resistance cells are rooted even in America and its capital.”

But days after the text emerged, Washington sent B-52 bombers to fly over the Middle East in an apparent warning to Iran.

The US military’s Central Command confirmed that the two jets were flying alongside aircraft from Israel, Saudi Arabia, Qatar and other countries.

In a statement, Central Command said the flights were to “deter aggression and reassure partners and allies of the US military’s commitment to security in the region.”

Flight-tracking information confirmed the American jets departed from Minot Air Base in North Dakota, something Central Command did not disclose.