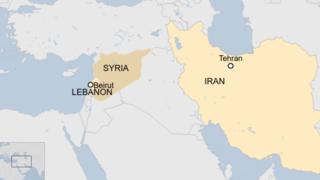 It says the pilot of the Mahan Air aircraft had to quickly change altitude, which resulted in injuries among several passengers.

Video posted by Irib shows one jet from the window of the plane and a passenger who had blood on his face.

Irib later quoted sources as saying the fighter jets could be American.

It was not immediately known how many passengers and crew were on board the plane.

Neither Israel nor the US have commented on the reported incident.