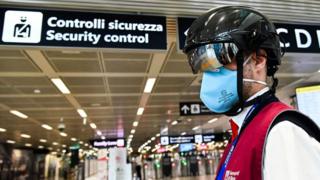 Italy’s government has signed a decree that will allow travel to and from the country from 3 June, as it moves to ease its coronavirus lockdown measures.

It will also allow travel between the regions – which has so far been tightly restricted – from the same day.

The move marks a major step in the country’s efforts to reopen its economy after more than two months of lockdown.

Italy has one of the highest death tolls in the world, but its infection rate has fallen sharply in recent days.

More than 31,600 people have died with the virus in the country, the third highest figure behind the US and UK.

It was the first country in Europe to impose nationwide restrictions when coronavirus cases began to surface in northern regions in February.

But it began to relax those measures earlier this month, when it allowed factories and parks to reopen on 4 May.

The latest decree was signed by Prime Minister Giuseppe Conte and published early on Saturday.

Some Italian regions had called for a swifter easing of restrictions, but Prime Minister Conte said they would be relaxed gradually to avoid a second wave of cases.

Shops and restaurants are also due to reopen from 18 May providing social distancing is enforced.

Catholic churches are preparing for the resumption of Mass on the same day, but there will be strict social distancing and worshippers must wear face masks. Other faiths will also be allowed to hold religious services.

All travel restrictions will then be lifted from 3 June.

Mr Conte’s announcement came shortly after the country, which was once the global epicentre of the pandemic, reported a further decline in its daily death toll.

It reported more than 900 deaths on 27 March, but the authorities said there were 262 on Friday.

Earlier this week, the government approved a €55bn (£48bn; $59bn) stimulus package designed to offset the economic impact of the pandemic on businesses and families.

In other global developments: