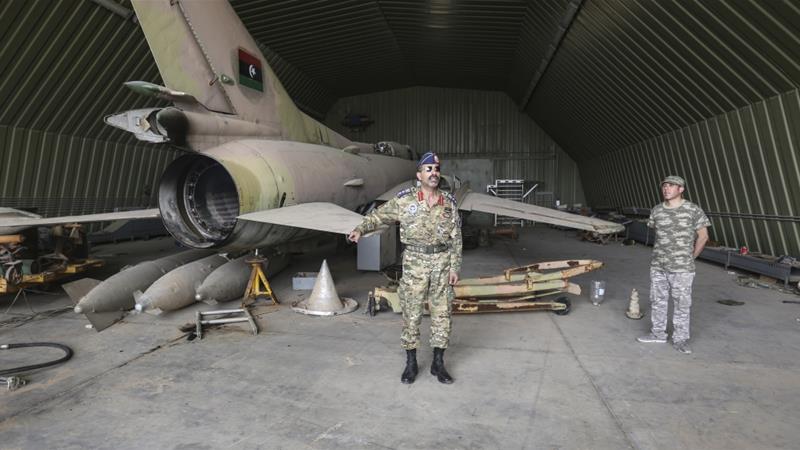 Libya’s internationally recognised government has launched air strikes against forces loyal to renegade military commander Khalifa Haftar after his forces announced they were pulling back from Tripoli front lines.

Air strikes by the Government of National Accord (GNA) targeted several locations in the west of the country, including in the Haftar stronghold of Tarhouna near the capital, Tripoli, according to GNA army spokesman Colonel Mohamed Qanunu.

In Tarhouna, two military vehicles and a vehicle carrying ammunition that belonged to Haftar’s Libyan National Army (LNA) were destroyed, the spokesman said.

On Thursday, Turkey’s state-run Anadolu Agency said the GNA carried out five air operations against forces loyal to Haftar in the past 24 hours.

A day earlier, the LNA announced it was withdrawing two to three kilometres (1-2 miles) to ease conditions for Tripoli residents at the end of Ramadan, the Muslim holy month of fasting. The move followed the loss on Monday of a key airbase.

Since 2014, Libya has been split between rival factions based in Tripoli and in the east, in a sometimes-chaotic war that has drawn in outside powers and a flood of foreign arms and mercenaries.

Backed by the United Arab Emirates, Russia and Egypt, the LNA still holds all of eastern Libya and much of the south, including most oil facilities, but its presence in the northwest, where Libya’s population is concentrated, has come under intense pressure.

Last month, the GNA took a string of small towns linking Tripoli to the Tunisian border.

Earlier this week, it took al-Watiya, the LNA’s only airbase near Tripoli and a significant strategic prize, as well as three small towns to the southwest.

Last month, GNA Interior Minister Fathi Bashagha said capturing Tarhouna would end Haftar’s campaign to seize Tripoli, but that the fighting in the capital was the priority.

An LNA military source told Reuters news agency that in Tripoli the LNA had completed a gradual withdrawal from the Salahedin battlefront, one of the main theatres of fighting in the capital.

Residential areas, hospitals and other civilian infrastructure in Tripoli have been bombarded frequently for months.

Turkish drones and air defences appear to have played a key role in GNA advances in recent weeks, with repeated claims of attacks on LNA supply chains from the east.

Turkey’s Defence Minister Hulusi Akar said on Wednesday that “the balance in Libya changed significantly” as a result of Turkish training and advice.