Storms broke the summer heat yesterday night in parts of the UK, providing some hope for the country’s vast tracts of chronically parched land. Rainfall arrived hard and fast as darkened skies tipped out more than an inch’s worth of rain over an hour. For many areas, that has continued this morning, and Met Office weather forecasters predict a rocky day for many Britons.

Where are rain, hail and lightning hitting right now?

Met Office thunderstorm alerts have warned that Britons will continue to experience heavy rain and lightning for the rest of today.

The agency’s yellow weather warnings continue for England, Wales and parts of Scotland until 11.59pm tonight. 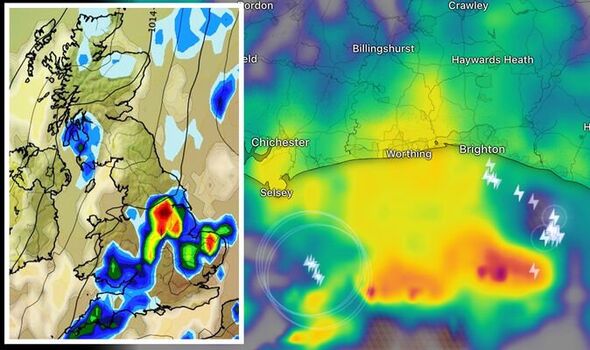 Real-time lighting radars show a cluster of lightning strikes in the ocean several miles south of the Worthing coast.

Community weather monitors with LightningMaps.org have found storms creating up to 26 lightning strikes per minute today.

The south coast storm is one of Europe’s most active this morning, with up to five strikes per second over the English Channel.

Maps show the storm is gradually moving northeast and may arrive at Brighton later today.

Weather charts show that most of England’s rain has fallen across the southwest and midlands.

In the south, rain has settled around Bournemouth, Barnstaple and the Cornwall coast at Falmouth, St Ives and Penzance.

Further north, Peterborough and Lincoln have seen the most rain, approximately 1mm per hour.

Weather maps show the rain should become much more widespread over the next few hours, concentrating over the Southwest, Wales and Midlands in the evening.

Most of the southwest, from Southampton to Truro, will experience up to 3mm per hour by 6pm, with the same system covering southern Wales, Birmingham and Manchester.

The latter two cities and Norwich can expect the most rain, nearly 30mm per hour.

According to the Met Office, many areas experiencing rain and lightning today can also expect hail.

Forecasters warned people within its alert areas to expect between 20mm to 30mm of rain per hour and up to 50mm in less than three.

Hail is a likely “additional hazard” for people within nine regional authorities today.