London snow forecast: Hail showers fall but will it snow in London?

Those venturing outside their London homes today (Sunday, March 29) for their daily dose of exercise under the coronavirus lockdown will notice the weather has become more chilly. Hail showers are forecast to fall from 2pm onwards, though parts of London saw hail shortly after 12pm.

BBC Weather predicted “hail showers and a fresh breeze” in its Sunday forecast.

The capital’s temperature will hover around the 8C mark and there’s an 88 percent chance of hail falling.

The chillier weather comes as the UK will be the coldest European country thanks to Arctic winds sweeping in from the north.

BBC meteorologist Matt Taylor said, the country will be 5C colder than the usual temperatures for this time of year. 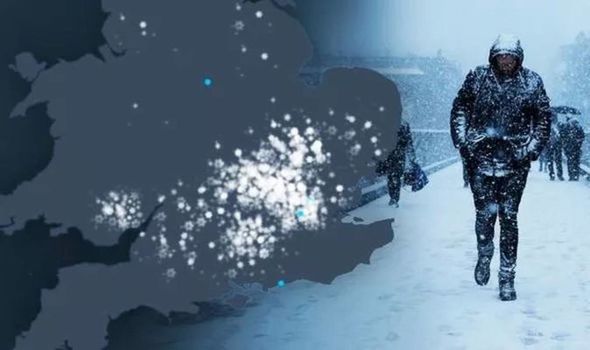 The UK may have entered British Summer Time as the clocks went forward on Sunday, but the upcoming weather will be anything by summery.

A 1,000 mile-wide cold weather system is heading to the UK from northern Europe.

Temperatures on Sunday night across London and southeast England could be as low as -1C, says the Met Office.

Though cold enough to snow, London is not forecast to see any wintry showers and there will be some sunny intervals. 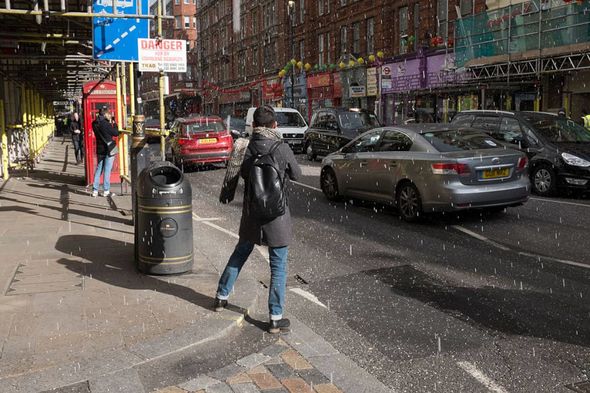 The Met Office said: “Temperatures by day on Sunday will struggle to reach double digits, the keen northeasterly wind making it feel colder.

“There’ll be a risk of hail and snow along eastern coasts and inland, although these will become more confined to high ground in the north later in the day.”

In its forecast for London and the southeast for Sunday evening, the UK’s national weather service said: “A few showers will continue across Kent, but elsewhere it will become dry with clear spells.

“Remaining breezy near the coast with a frost forming inland. Minimum temperature -1C.”

Snow was spotted in Surrey and Scotland on Sunday, while hail fell in Brighton and East Sussex.

The cold weather system from the Arctic brought snow to parts of northern and England overnight.

Windchill will make it feel even colder with temperatures dropping as low as -8C in Scotland and -6C in south England.

Comparatively, it is colder than Russia’s capital Moscow, where the mercury will sit at -3C. 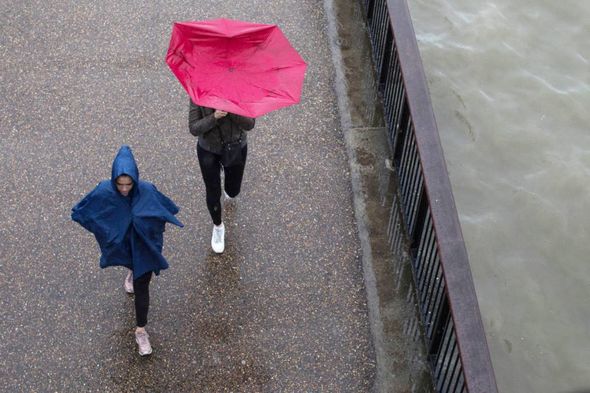 Terry Scholey from Netweather said: “It’s going to feel bitterly cold today in a stiff and very blustery north wind, that’ll give gusts to gale force in the Dover Straits and along some North Sea coasts.

“We’ve already had a few snow showers over North East England, but many of these will fall as rain or hail and mostly in the east, with any snow through the day chiefly on hills.

“There’ll be a few sharp ones over East Anglia and the southeast, but most of the showers will be light.

“Generally, large amounts of cloud are expected, but there’ll be sunny intervals, with the best of these in the West.

“Top temperatures only 4 to 6C in the north and 7 to 9C further south, but it’ll feel more like 1 or 2C out in the wind.

“It’ll be similar into the evening, with just subtle changes after dark.”

Looking further ahead, the Met Office says that towards the middle of April the weather may turn more changeable with a few days of rain and strong winds alternating with periods of sunshine and showers for much of the UK.

Any showers may turn to a mix of sleet and snow over northern hills.