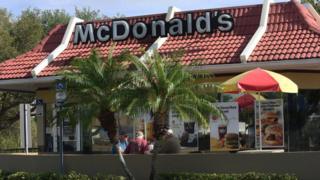 Jamelia Fairley and Ashley Reddick are named on behalf of some 5,000 women from over 100 US McDonald’s outlets.

It is backed by Time’s Up, a high-profile legal charity set up as part of the #MeToo movement.

McDonald’s said it is “committed” to addressing all harassment claims.

“McDonald’s has always been committed to ensuring that our employees are able to work in an environment that is free from all forms of discrimination and harassment,” the company said in a statement.

Ms Fairley and Ms Reddick join 5,000 other women who have worked at corporate-run McDonald’s restaurants across Florida since April 2016 and experienced sexual harassment on the job.

The suit, filed in the company’s home state of Illinois, centres on a particular McDonald’s restaurant near Orlando, Florida, and alleges “extensive illegal harassment that went ignored by management”. The plaintiffs say that numerous women were subject to “pervasive sexual harassment and a hostile work environment, including groping, sexual assault and sexually-charged comments” at the Orlando restaurant.

Ms Fairley, 24, claims she was harassed by two colleagues. One made sexually-explicit comments towards her, she alleges, saying she had a “fat ass” and that he would “take [her] on a ride”. Ms Fairley says the comments escalated to unwanted touching. The colleague would pull her into his groin area and “[rub] his genitals on her”, the suit claims.

Ms Fairley reported the behaviour, she says, and had her hours cut as a consequence of speaking up.

“McDonald’s did not take my complaint seriously,” she said.

Ms Reddick, 28, a former McDonald’s worker, also allegedly faced verbal and physical harassment from a male co-worker. The colleague would rub his groin area against her, she says, and touch her thighs. On one occasion she alleges he put his phone in front of her face and showed her a picture of his genitals.

Ms Reddick says she told her managers and was fired as a result.

“Jamelia and I are filing this lawsuit on behalf of McDonald’s workers across Florida because the company needs to step up and protect us,” Ms Reddick said. “We’re not the only ones who have been sexually harassed while on the job at McDonald’s… This is a nation-wide problem, the company has known about it for years and we won’t stop speaking out until McDonald’s listens to us.”

It is the most recent in a series of sexual harassment allegations waged against the company, including another class action lawsuit in Michigan launched in November 2019.

McDonald’s has said that it updated its discrimination, sexual harassment and retaliation policy and training in January 2019 and says it offers a free hotline to call with any “employment concerns”.

The Time’s Up Legal Defense Fund was founded in 2018 amid a wave of popular anger over workplace harassment following the exposure of abuse by powerful men.

The fund is backed by some of Hollywood’s most powerful women, including Meryl Streep, Reese Witherspoon and Natalie Portman.

It connects low-wage workers experiencing sexual harassment to lawyers around the country and has received more than 4,915 requests for assistance since its founding. It has committed to funding 174 cases with the $24m raised so far in donations.