The predictions, which also come from the Met Office’s long range forecasts, say storms will bring the UK’s first batch of extreme weather to an end by the middle of next week. Most of the country will be blanketed under an amber weather warning for extreme heat from Sunday, July 17 to Tuesday, July 19. Interactive weather maps suggest the mercury could rise to around 40C during this time, which will be record-breaking if it comes to fruition. Among the advice given, people are urged to keep hydrated and to only ring 999 in an emergency.

But with ambulance services declaring critical incidents and the Met Office itself warning of a “population wide adverse health effects”, many people will be looking for this humidity to break.

And current meteorological models suggest it will by Wednesday – when all weather warnings cease.

Along with a tumble in temperatures, senior meteorologist at British Weather Services Jim Dale told Express.co.uk that thunderstorms, including lightning, could follow on from the heat on Wednesday evening.

While no immediate forecasts uphold this prediction, senior operational meteorologist at the Met Office, Annie Shuttleworth, could not rule out the possibility. 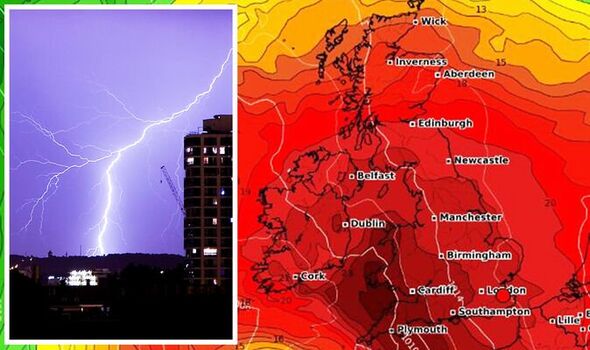 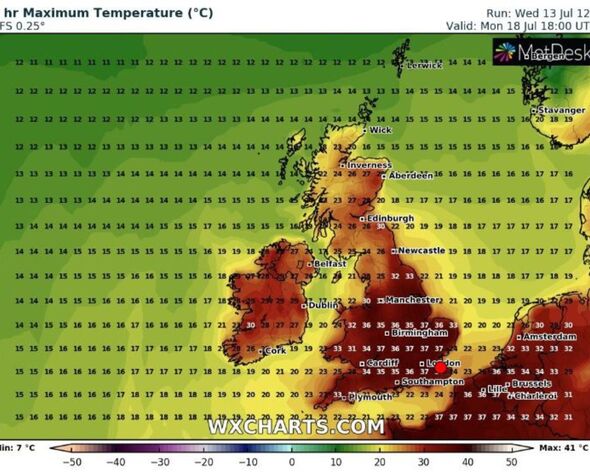 She told Express.co.uk: “We expect the weather to turn cooler from mid-week next week and more unsettled for a time through Wednesday with showers for some, this brings a low risk of thunderstorms but it is too early to add any more details.”

The leading forecaster’s long range forecast also alludes to the chance of storms reaching the UK.

It says: “It is likely that much of the UK will see temperatures gradually decrease to average or slightly above average through next week, though occasional thundery showers are possible in the south and southwest.

“Looking more widely unsettled during the later part of the period.” 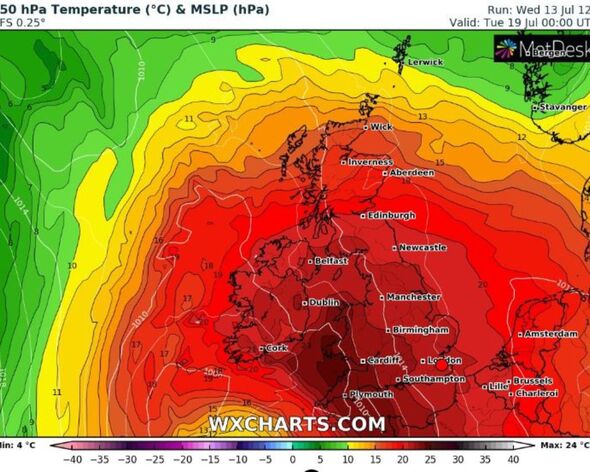 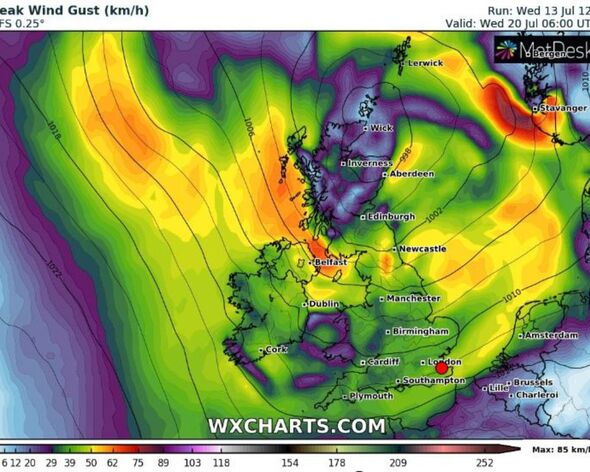 Towards the end of the month, the high pressure responsible for hot temperatures could be set to make a return.

The forecast adds: “After a spell of more changeable conditions for many areas, high pressure will likely bring more settled weather again to the south and southwest.

“This may extend more widely across the UK, bringing generally fine weather for most, however the northwest will continue to see the majority of any cloud and rain.

“Temperatures will likely be above average for most towards the end of July, especially in the south, with the potential for it to be hot across England and Wales.

Despite Wednesday being the day when storms are forecast, temperatures will still remain hot.

In the south, WX Charts says there will be highs of 25C, while in the north this will be around 18C.

Come Thursday these temperatures will drop again slightly by one or two degrees.