The Met Office has issued swathes of weather warnings for the UK in light of Storm Darcy. Warnings are in place today until Wednesday, with some areas forecast to see as much as 12 inches (30cm) of snow. Here are the latest weather warnings, forecasts and maps.

An amber snow warning has been issued for parts of eastern and South East England today until 12pm.

The warning reads: “An area of widespread, persistent and occasionally heavy snow will affect parts of the southeast and east of England throughout Sunday and into Monday, with the potential for some significant accumulations across eastern parts of Norfolk, Suffolk, Essex and Kent.

“Very strong easterly winds with gusts of 40-45mph inland and 50-55mph along north-east facing coasts will also lead to drifting of lying snow. 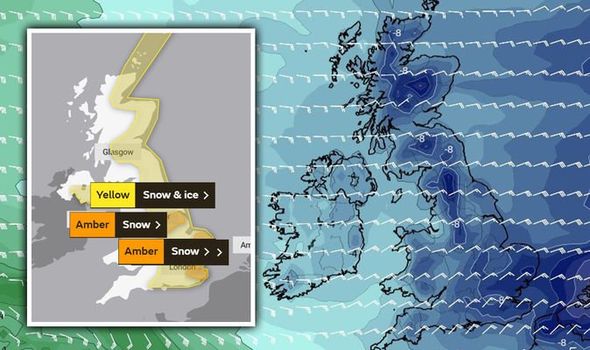 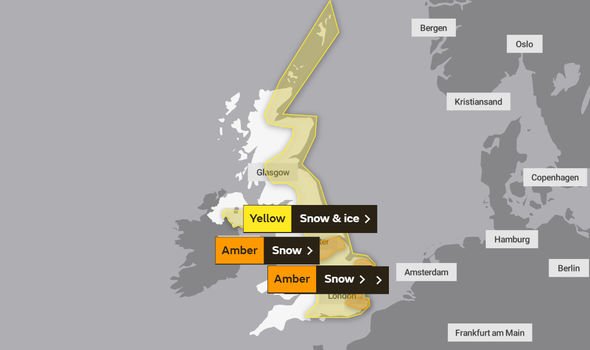 “During Monday morning the snow will turn more intermittent before gradually easing.”

The Met Office has also issued an amber snow warning for parts of the East Midlands and Yorkshire and the Humber until 2pm this afternoon.

The Met Office warns “snow showers will become frequent across the area” over the course of the morning, while “accumulations of 3-8 cm and possibly as much as 10-15 cm” are possible in some places – particularly over the Lincolnshire Wolds.

The Met Office add: “Strong northeasterly winds will cause the snow drift.” 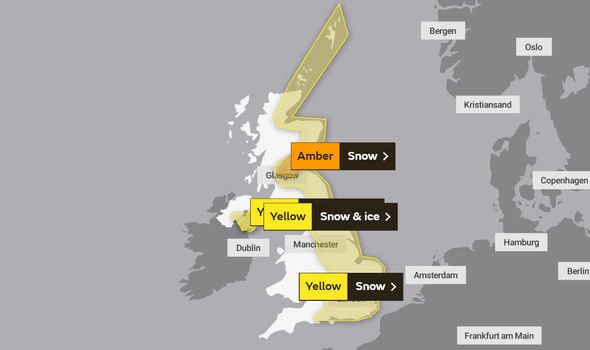 On Tuesday, the Met Office has now added another amber snow warning for parts of Scotland, including Central, Tayside and Fife; SW Scotland and Lothian Borders and Strathclyde.

The amber warning is active from 3am until 9pm on Tuesday.

The warning reads: “Snow showers are expected to continue during Monday night and Tuesday with some large accumulations building up in parts of central Scotland.

“Across the area 5-10cm of snow is expected to lie fairly widely with areas of 10-20cm, perhaps particularly over higher parts of the Central Belt and the chance of 25cm of snow in one or two spots.”

The amber warnings are in addition to several yellow ice and snow warnings in place elsewhere in the UK this week.

Sara Thornton of Weather Trending told Express.co.uk the UK can expect further snow over the course of Monday and Tuesday.

Ms Thornton said: “The cold is now locked in for the week and, with such low temperatures, anything that falls out of the sky will be snow.

“But it looks like amounts will continue to vary greatly from place to place. That’s because the snowfall will align itself into narrow but relentless ‘streams’, giving up to a foot of snow in some spots and virtually nothing for places in-between the streams.

“The snow will be dry, powdery and prone to blowing into deeper drifts, causing some major travel disruption on the most exposed routes.

“The snow flurries will drift as far as Wales and the coast of Northern Ireland at times, but many western parts of the country will stay snowless with a lot of sunshine.

“However, wherever you are, the wind will still be bitingly cold. As winds fall light around midweek, overnight temperatures may fall extremely low, especially where there’s snow-cover.

“Temperatures below -15C would not be surprising in some Highland glens.”