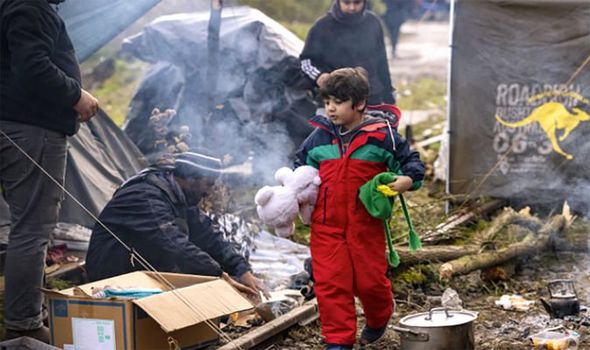 Asif Safi, 16, fled Afghanistan after the Taliban seized power in August, bringing in a new era of poverty and desperation.

But he has not contacted his parents back in Afghanistan, his brother in England, or his cousin living in another migrant camp in Northern France.

The teenager’s parents have been desperately calling Imran for information and to hear their son is okay.

Family members of those missing, feared dead, are understood to be arriving in Calais in a bid to find out what has happened to their loved ones.

Imran, 22, arrived in a migrant camp in Grande-Synthe, near Dunkirk, yesterday afternoon to speak to Asif’s friend in a desperate bid to find out what happened to his cousin.

A young Iraqi-Kurdish woman, who was trying to join her husband. was the first confirmed victim of the Channel tragedy friends and relatives have revealed.

Baran Nuri Muhammadamin, 24, was with a female friend. Her husband saw her GPS track disappear four hours and 18 minutes into the crossing on Wednesday, her family said.

But migrants left in numerous migrant camps are desperately searching for more information on friends and relatives they have not heard from since the deadliest crossing since the small boats crisis began in 2018.

In a sign of how desperate people living in the squalor of the camps are, one told the Sunday Express: “We either get to England or we die.”

Iraqi-Kurd Aresh Adr, 21, said he would make the journey because the conditions both back home and in the camps of northern France are so poor.

And a family, including one with a four-year-old boy, told how they were pressed against metal barriers in a near 1,200 mile journey in the back of a lorry across Italy and to France.

Asif’s cousin, Inram, 22, said: “His WhatsApp is off. He is not messaging me. I cannot find him. I have come to try and find him.

“His father and mother are messaging me all the time saying he has not messaged them.

“I am very worried.

“His big brother is in the UK. One of his friends is in this camp and we have come to speak to him.

“We do not understand where he is. His big brother, his mother, his father, they call me.

“One day he was in here, in the jungle, and the next day, he had a boat and there was a problem. He is not here. But he was on the boat. He may be dead.

“I am so worried about him.”

Mr Safi said they were trying to reach England because life in Afghanistan is so bad as the economy collapses after the Taliban takeover.

Imran told the Sunday Express: “Afghanistan has problems. He left after the Taliban because his school finished, his education finished, work finished.

“I came here because Europe is safer and we could go to school. All the facilities here are good.

“In Afghansitan, 99 per cent of the time you may not come home because there is a blast. Deaths, deaths. 50 attacks a week.

“He came here because it is safe.”

Asked if he would get a boat despite what he fears happened to his cousin, he said: “Yes, because I have heard three Afghan people were safe. I have been looking on the news and seen that 27 people have died.”

Diari Yadgar, from Iraq, told how he travelled in the back of a lorry with his father Rahman, 51, mother Badria, 44, sister Tara, 23, baby brother Mohammed, 4, and brothers Nzar, 19 and Shkar, 24: “We have arrived here today.

“We came by the normal way. We took a boat from Turkey to Italy. Then Italy to here in a lorry trailer.

“This is the first time we have eaten properly for a month.

“For a month, we have only eaten biscuits.

“It was so awful. My father said he managed to eat some rice once in the last month. We only had biscuits and water.

“Inside of the trailer of the lorry, there was metal. We were on the metal and it was so cold.

“We didn’t have a good life in Iraq. We had no money, no job. There is no life, there is no economy, there is no job. Daesh are there.

“I will kiss the floor when we reach the UK. I do not know how we will get there… It may be by the water on a small boat.

“We are worried about this.

“A few days ago, a boat sunk. It was because there were too many people on there. I am worried about my family being on a boat that is too full with lots of people.”

Other migrants feared to have drowned crossing the Channel said they were being forced into an overcrowded dinghy and made desperate calls saying they had run out of fuel. The inflatable is believed to have been swamped by a passing cargo ship.

Rescuers who pulled the bodies of 27 migrants from the sea on Wednesday described the operation as like a “horror movie” as the search for other victims continued.

“I will get another boat. I have tried three times. Twice, the police came and stopped us and another time the engine broke. We had been on the water for one hour or so went the engine went.

“I called for the police in France and a big ship came and got us. There was too much water. It was coming in to the boat.

“It was very scary and very dangerous. But what can I do? It is better than this life. We either get to England or we die.

“I came here from Belarus. Then we went into Poland, then Germany, then France.

“This was maximum three weeks ago.

“They call me up and tell me when it is time to go.”

Two best friends are feared to be among the 27 confirmed deaths and one family fear the worst after he sent them a voice message saying “pray for us” as they took to the water.

Iraqi-Kurd Deniz Ahmed Mohammed, 27, a Kurdish migrant, has not contacted his family since boarding a boat on Wednesday. In a chilling voice message he said to family: “Just pray for us”.

Sangar Ahmed, 33, from Ranya, Iraqi-Kurdistan, said his childhood friends Shakar Ali, 27 and Harem Pirot, 23 have vanished since they were due to make the crossing on the Wednesday.

Speaking in a squalid camp near Dunkirk, Sangar said he spoke to his friends from Ranya, Northern Iraq, shortly before they boarded the boat.

He said he was told it was “overcrowded”.