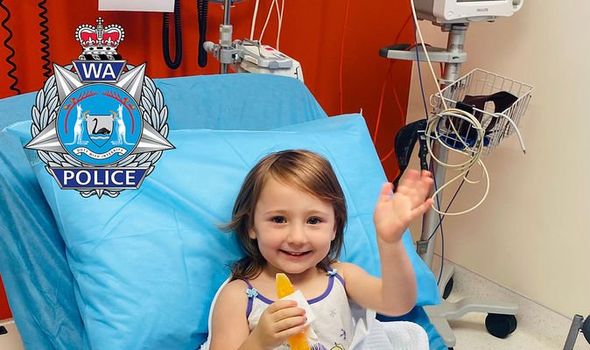 Grinning from her hospital bed and waving to the camera while clutching an ice lolly, the four-year-old could not contain her joy after being found alive and well.

Her disappearance created headlines around the world, with many likening it to the case of Madeleine McCann.

Cleo had vanished from her family’s tent at a campsite near the town of Carnarvon in Western Australia on October 16, triggering a massive search.

She was eventually found in a locked house in the early hours of yesterday morning after police smashed their way into the home in Carnarvon, after receiving “forensic clues”.

Australian authorities said a 36-year-old man had been taken into custody and was being questioned by detectives.

They wrote on Instagram: “Our family is whole again.”

A close family friend also revealed the emotional message Ellie wrote to her loved ones to let them know the news.

The unnamed woman had said: “To be woken with my phone going crazy at 4.50am and see the words, ‘Cleo is home, alive and safe’.

“Seeing Ellie saying her beautiful girl is home is nothing short of a miracle. We are so happy for her to be home.”

Police released footage of Cleo’s rescue. And Deputy Commissioner Col Blanch said: “They found little Cleo in one of the rooms.

“One of the officers picked her up into his arms and asked her, ‘What’s your name?’ She said, ‘My name is Cleo.'” Commissioner Chris Dawson added the youngster was also receiving medical care after the rescue.

He said: “To find a little girl, a vulnerable little girl, after 18 days…you know, obviously people think the worst, but importantly hope was never lost. I think Australia is rejoicing.”

Police revealed that the man in custody has no connection to the Smith family and that no charges have so far been laid.

News that Cleo had been found sparked a sense of huge relief in the local community, and attracted messages from around the world.

The discovery ends a huge search, but leaves many unanswered questions.

The house where Cleo was found is about six minutes’ drive from her family home in Carnarvon.

ABC News reported a man who lived at the house had been recently spotted by a neighbour buying nappies.

Madeleine McCann’s parents say they “have hope” they will find their daughter after closely following the case of Cleo Smith.

Maddie vanished aged three in 2007 on a Portugal holiday.

Now a source close to Kate and Gerry McCann, both 53, said: “They were willing Cleo to be found safe and well. They are thankful that she had been found.”

British police have asked for new funding to reboot the £12.5million search for Maddie, which is due to get Home Office approval.