A programme in the Utah Navajo Nation hopes to provide sustainable aid to elders as tribes worry virus could spread. 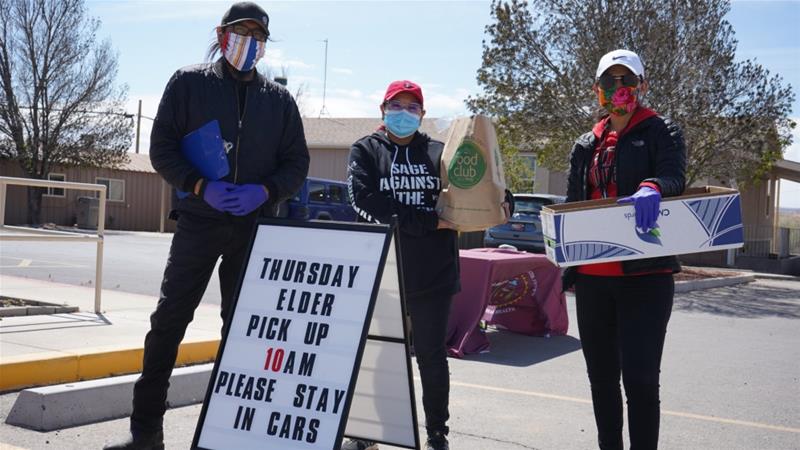 As the Navajo Nation began preparing for the coronavirus pandemic in March, Pete Sands, coordinator of a food delivery programme in the Utah portion of Navajo tribal lands, envisioned the difficulties that were to come.

The majority of the Navajo Nation, an area larger than West Virginia that essentially functions as a reservation, lies in parts of New Mexico and Arizona. A smaller portion of the land is found in Utah and does not receive the same attention as other regions, Sands said.

“A lot of the times, the Utah portion of the Navajo Nation kinda has to fend for itself,” Sands told Al Jazeera. “[T]hat’s the reason why I started my programme.”

Navajo Nation faces unique challenges when it comes to fighting the coronavirus. Extended families often live in the same household; only 13 full-service supermarkets serve about 174,000 residents across 17.5 million acres (7.1 million hectares); and about a third of its residents do not have running water partly due to the United States government not honouring agreements with the tribe.

Sands started working for the Utah Navajo Health System (UNHS), a nonprofit that started in 2000, to offer dental and medical care to rural Navajo communities in the state in February. He started in a public relations role but quickly shifted responsibilities as the crisis grew.

His programme, funded largely by the UNHS but also outside donations, has been at the forefront of the response to the pandemic among Navajo people in Utah.

Sands works with volunteers to make sure staples as food, water, detergent and other needed supplies make it to at-risk people, through a delivery programme aimed at elders on the Utah portion of the Navajo Nation.

“We stocked up, we started working heavily with the rest of the Navajo Nation … We share everything we get,” he said.

They have made about 1,000 home deliveries since the programme started on February 28. 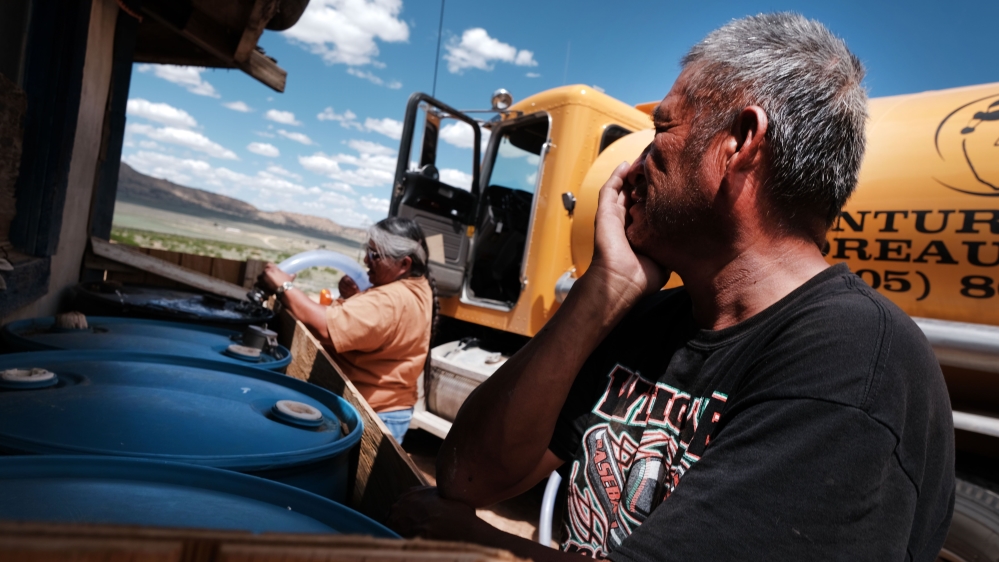 Sands explained that because the majority of the Utah portion of the Navajo Nation is rural, with elders and other community members living in hard-to-reach areas, he and others aim to provide enough supplies to residents to last through a self-quarantine, or in the case of elders, to stay home until things are safe again.

“A lot of our recipients are elderly, about 80 percent … but there’s young families that have no job. Everyone has a situation, so we try to help everybody,” he said.

Navajo Nation had at least 2,530 confirmed coronavirus cases and 73 known deaths as of Tuesday, according to the Navajo Epidemiology Center. The Navajo Nation has the third-highest infection rate per capita of any region of the US. 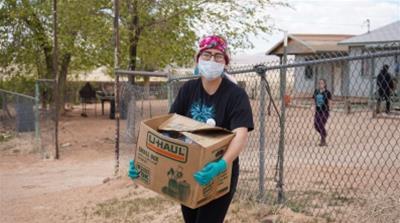 Two of those deaths occurred in San Juan County, Utah, where the majority of Utah’s Navajo population lives.

Two members of the DeJolie family – Douglas, 58, and his mother Jean, 81 – died in hospitals in late March after contracting the virus, according to local media reports.

San Juan County had total 116 cases as of May 4, with at least 43 of those being among the Navajo population.

Sands said the initial days of the pandemic crisis on the Utah section of the Navajo Nation were difficult, especially after testing increased and so did confirmed cases.

But things are improving, according to Sands.

“We found that this distribution programme, it goes along with the trends of the virus. When it was at its peak, that’s when requests for food was at its peak. Now it’s levelling out.”

Navajo, who call themselves “Dine” in their language, are adapting, Sands said. “I think people have learned to live with the rules, learned how to conserve food.”

These rules include extensive lockdowns from the Navajo government that bar movement from 8pm to 5am, the New Mexico government blocking visitors from Gallup, New Mexico, an important city where many Navajo buy supplies but is the hardest hit in the state, among others.

“Living like this is new for everybody. We’ve had to adjust to it,” Sands said.

‘The consequences of invisibility’

While the Navajo Nation is the coronavirus epicentre among Indigenous populations in the US, there are concerns that other tribal nations, which face some of the same systemic issues as the Navajo Nation, could face a similar challenge.

At least 3,600 cases have been confirmed across all tribal nations, according to the Indian Health Service (IHS), the federal programme which administers healthcare for Indigenous people in the US.

Crystal Echo Hawk, founder and CEO of IllumiNative, a Native-led nonprofit that aims to increase the visibility of Native peoples in American society by changing the national narrative, said she fears the number of cases may be higher.

Many Native Americans live in cities, and the IHS and other federal programmes, which have to deal with state and local bureaucracies, do not have adequate infrastructure to count these cases.

For example, there are no comprehensive studies that provide the number of unsheltered Indigenous people across the US, though they account for a disproportionate amount of unsheltered people in so-called “border towns”, such as Gallup and Flagstaff, Arizona, among others.

IllumiNative has tried to address the coronavirus pandemic across tribal nations, through its Warrior Up campaign, which encourages people to “Stay Away, Together”, through a public service announcement featuring prominent Indigenous and non-Indigenous celebrities.

For Echo Hawk, the needs of Native communities exacerbated by the crisis expose underlying systemic issues.

“When we look at this, it’s hundreds of years of systemic racism, chronic underfunding and discrimination at federal and state levels that have really created limited access to healthcare and other basic necessities,” she said in a release delivered to Al Jazeera after the event.

Congress allocated $8bn for tribes under its $2.2 trillion CARES Act passed in March. But many Indigenous groups have been critical of the delay in the disbursement of the funds. The funds were stalled in part due to legal challenges over who was entitled to the aid.

A group of tribes subsequently sued the Treasury Department for not releasing the funds by the end of April as legally mandated by the CARES Act.

In advance of a scheduled visit by US President Donald Trump to Arizona on Tuesday, the US Treasury announced it would begin releasing $4.8bn of the funding to Native American tribal governments. The rest, the Treasury said, would be released at a later date. Litigation over who is entitled to the funds continues, though courts have initially ruled in favour of the tribes.

Trump’s visit is set to feature Senator Martha McSally, a Republican up for re-election this year and trailing her Democratic challenger Mark Kelly in some polls.

McSally has made her efforts to address the coronavirus crisis on tribal lands a prominent feature of her re-election campaign.

“Defendant has not yet arrived at a determination as to the amounts to be paid to Tribal governments from the #CoronavirusReliefFund under Title V of the #CARESAct.”

Back on the Navajo Nation in Utah, Sands said the lack of federal funds was noticeable, but the situation there improved “last week”.

Though his programme is currently financially sound, thanks in part to the UNHS funds and donations that keep “piling up”, Sands knows the pandemic will continue and money will eventually run out. But he will keep fundraising throughout the region.

“I have a plan in place to keep the programme going as long as it can. Eventually, the money’s going to dry out. Food costs a lot. Transport costs a lot. It’s not cheap,” Sands concluded.