The blaze broke out in the 850-year-old cathedral’s medieval roof on April 15 last year, causing the 295ft spire to collapse through its stone-vaulted ceiling. From the street, the devastation was watched by horrified, weeping Parisians – leading President Emmanuel Macron to pledge Notre Dame would be back up and running within an ambitious deadline of five years. At the centre of French culture and society for centuries, the cathedral is vitally important to the people.

Philippe Villeneuve, Notre Dame’s architect since 2013, said: “I have only one obsession: save the cathedral, resurrect it and reopen it to the public.”

BBC documentary Rebuilding Notre Dame: Inside The Great Cathedral Rescue has followed the team endeavouring to turn Mr Villeneuve’s passion into a reality.

After an outpouring of generosity from France’s wealthiest families raised £750million, master craftworkers and engineers started to make the site safe.

The wooden roof was destroyed and 1,300 lead tiles were vaporised, covering the building in toxic lead particles.

The stone roof was left open to the elements with three large holes, posing a risk that it would fall and start a “deck of cards” chain of events.

If the roof collapsed, the 28 heavy stone buttresses which flank the cathedral’s walls would push inwards, causing the building to collapse in on itself.

Scaffolding surrounding the spire before the fire started is now a 500-ton mass of melted, unstable metal that could fall in on workers at any time.

The first job was installing alarms to ensure that if the scaffolding moved even in inch, everybody could leave. 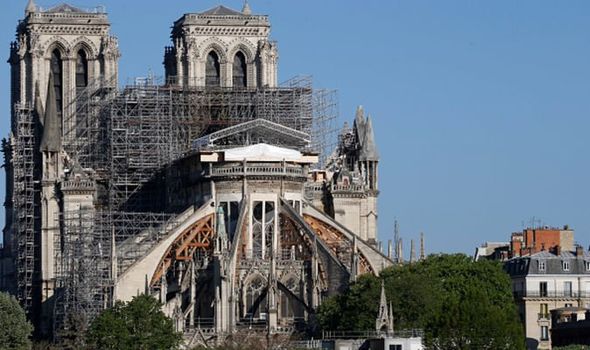 Additional scaffolding will be built around the twisted metal so it can be dismantled piece by piece.

Wooden supports were also built under each flying buttress outside the cathedral to stop the walls collapsing.

Workers have begun sorting through each burnt roof beam to try and salvage what they can. Luckily, a full 3D scan was taken of the roof’s supports – made from 1,300 oak trees and Europe’s most geometrically complex timber structure – in 2016. Remi Fromont, Paris’s chief architect of historic monuments, had also drawn a map of the timber ceiling in 2014.

He said: “It was a completely magical place – it had a smell, it had a particular light and there were still tool marks of the workers on the timber. It felt like they had just left yesterday.

“We need faith for this project. It is the building itself that generates this faith, even for atheists, and that is some-thing magical.” Describing the carnage after the fire, timber conservation scientist Catherine Lavier said: “This vast sublime roof we had always known, it was a bit of a puzzle, with beams from different periods that go back to the 13th century.

“To see it suddenly all burned, all mixed up, it is very emotional, very difficult.”

The rebuilding, paused amid the coronavirus outbreak, also presents an opportunity to learn more about the cathedral. There are no first-hand records about the artisans who built Notre Dame or where the materials came from. 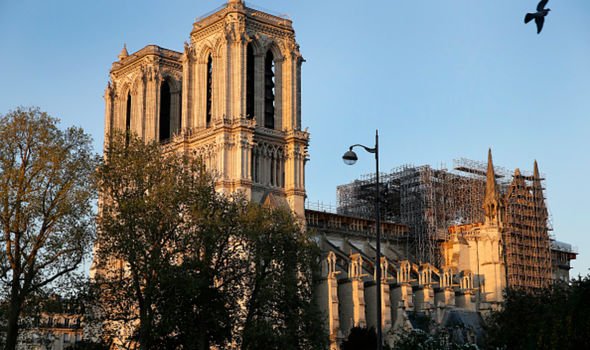 The vaulted ceiling is to be one of the first things rebuilt, but until now, little had been known about where the limestone came from.

However, analysis of pieces that fell during the fire showed fossils of a specific type of plankton that revealed the stone originated in a quarry underneath what are now the catacombs of Paris.

While they can no longer mine the stone from this area, experts now know exactly what they are looking for when it comes to replacing the vaults.

Astonishingly, Notre Dame’s famous rose windows were left untouched, but many of the other thousands of 13th century stained glass panels now have cracks caused by the intense heat of the fire.

After analysis to check their strength, a team will glue each piece meticulously and clean every inch of every window with cotton balls and distilled water. 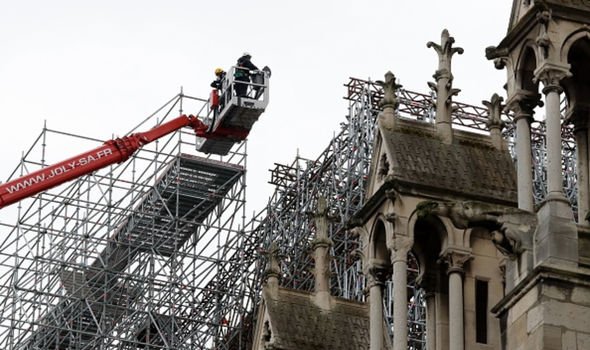 It has not all been straightforward.There are still questions and divisions about how to replace the lost spire.

Mr Villeneuve believes it should be rebuilt exactly as it was before, while President Macron has expressed an interest in adding a contemporary feel to the cathedral.

Architects from around the world have submitted ideas and a decision is to be made next year.

The cathedral is not yet out of danger and the next few years will be vital in ensuring the safety and sanctity of the building.

Archbishop Michel Aupetit performed Good Friday mass at Notre Dame, to celebrate both the Easter religious festival and to mark the one-year anniversary of the devastating fire. 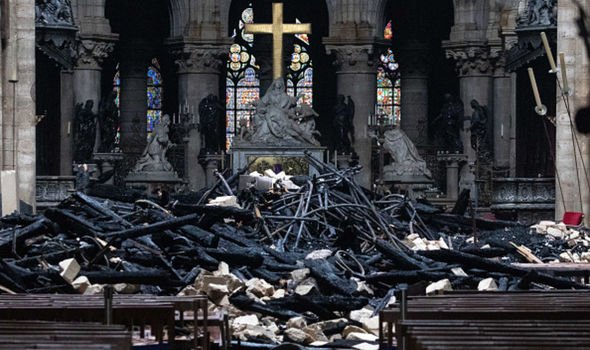 The event, which saw only seven people attend, was streamed live.

A crown of thorns, which is said to be the one placed on Christ’s head during the crucifixion, returned to the cathedral after being saved from the wreckage.

As the reconstruction continues, Notre Dame remains at the heart of France.

Father Patrick Chaivet, the cathedral’s rector, said: “Notre Dame is not just Paris, it is France and beyond France. It is the world.

“[Now], faced with such drama, now there is hope.”

Rebuilding Notre Dame: Inside The Great Cathedral Rescue is on BBC Four today at 9pm.