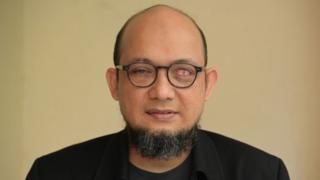 Two Indonesian policemen have been jailed over an acid attack on a prominent anti-corruption investigator.

The attack on Novel Baswedan three years ago left him blind in one eye, and is suspected to be connected to corruption cases he was working on.

The officers were arrested after President Joko Widodo ordered the case re-opened.

But the victim’s lawyer said the sentences – two years and one-and-a-half years – were too short.

During the attack, Rahmat Kadir Mahulette threw acid at Mr Baswedan, while riding a motorcycle driven by his colleague Ronny Bugis.

His lawyer, Muhammad Isnur, told BBC Indonesia that the sentence was “heartbreaking”.

“The verdict is proof of the level of injustice [against Mr Baswedan] and the level of impunity for those who carried it out, it will do nothing to prevent the perpetrators from carrying out such crimes again,” he said.

The sentences were longer than the one year term that prosecutors had sought for the attack.

Speaking ahead of the verdict, Mr Baswedan told BBC Indonesia that he had “forgiven the perpetrators”.

“I have accepted what happened to me so I still have the spirit and the passion to keep fighting against corruption.”

An attack that shocked Indonesia

The brazen acid attack on anti-corruption icon Novel Baswedan when he was walking home after praying at his local mosque deeply shocked Indonesia.

His three-year long struggle for justice is viewed as a test case for how seriously the current Joko Widodo government is about fighting endemic corruption in the country.

Mr Baswedan is arguably the country’s most respected anti-corruption investigator, responsible for a number of high-profile cases that put high-ranking officials behind bars. It was no secret that this had made him many powerful enemies, in parliament and the police force, and he regularly received death threats.

Today’s verdict of two lower ranking police officers will not put to bed this case. Mr Baswedan has always insisted he has evidence that the attack was ordered by someone much higher up the chain of command, and has repeatedly publicly criticised the police’s handling of the investigation into the attack.

Despite now being blind in one eye, he shows no signs of being silenced, insisting that he will continue to fight corruption.