Belarusian police have used water cannon to disperse anti-government protesters who once again took to the streets of the capital, according to media reports and videos posted in social media.

Tens of thousands of people gathered in Minsk on Sunday to call on authorities to free political prisoners, in what have become regular opposition rallies since Alexander Lukashenko was declared the winner of a disputed presidential election on August 9.

The 65-year-old’s opponents say the polls were rigged and have demanded his resignation. Lukashenko denies electoral fraud and was inaugurated in late September in a ceremony held without any prior announcement.

Interior ministry spokeswoman Olga Chemodanova told the AFP news agency water cannon had been used in the latest rally in Minsk and there had been detentions but provided no further details. Rights group Viasna said demonstrators were held in the capital, as well as other places including Vitebsk and Gomel.

Prior to the march, Belarus withdrew the accreditation of all foreign correspondents with immediate effect on Saturday, making independent coverage of protests difficult.

Mobile internet in Minsk was down from around midday on Sunday. The weekly protests usually see a large turnout; some 100,000 people took part in last weekend’s gathering when more than 350 of them were arrested. 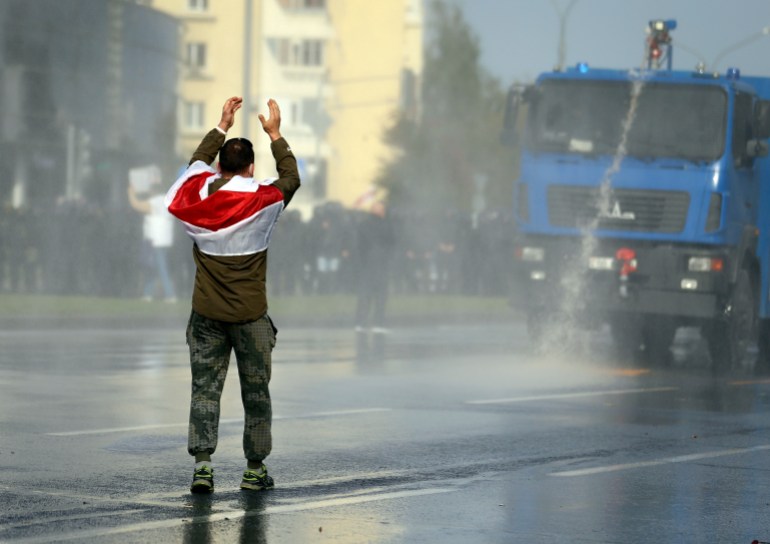 Before the rally, the Nexta Live opposition Telegram channel, which has coordinated protesters and has more than two million subscribers, urged Belarusians to march towards a detention centre in Minsk in support of political prisoners.

“These are people who have suffered for their convictions – and are still suffering,” Lukashenko’s election rival Svetlana Tikhanovskaya said in a statement before the protest. “Our task is to set them free.”

According to Viasnam there are now 77 “political prisoners” in Belarus including Tikhanovskaya’s husband and opposition blogger Sergei Tikhanovsky, who was not allowed to run for president, and senior opposition figure Maria Kolesnikova, who ripped up her passport to prevent authorities from deporting her.

Lukashenko, who has ruled ex-Soviet Belarus for 26 years, has accused Western countries and NATO of supporting protesters and trying to destabilise the country.

On Friday, the United States and the European Union hit Belarus with long-awaited sanctions for rigging the vote and orchestrating the crackdown on protesters, targeting key officials – but not Lukashenko himself.

Russia has backed its long-standing ally Lukashenko, offering financial backing and promising military support if events turn against him.