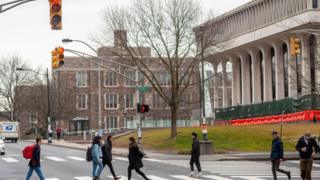 Princeton University says it is to remove the name of former US President Woodrow Wilson from a building on its campus because of his racist beliefs and policies.

The move follows a wave of protests across the US sparked by the death of African American man George Floyd.

Wilson was US president from 1913 to 1921 and helped to establish the League of Nations, a forerunner of the UN.

However, he supported segregation and imposed it on several federal agencies.

He also barred black students from Princeton while serving as university president and spoke approvingly of the Ku Klux Klan.

“Wilson’s racism was significant and consequential even by the standards of his own time,” Princeton president Christopher Eisgruber said in a statement on Saturday.

He said that the board of trustees had concluded that “Wilson’s racist views and policies make him an inappropriate namesake” for the university’s public policy school. A residential college will also lose Wilson’s name.

The name of the school will be changed to the Princeton School of Public and International Affairs.

Mr Eisgruber said Princeton had honoured President Wilson “not because of, but without regard to or perhaps even in ignorance of, his racism”.

“That, however, is ultimately the problem,” he added. “Princeton is part of an America that has too often disregarded, ignored, or excused racism, allowing the persistence of systems that discriminate against black people.”

Earlier this month, Monmouth University in New Jersey removed Woodrow Wilson’s name from one of its most prominent buildings.

The depth of feeling that followed the death of George Floyd has led to renewed demands for an end to institutional racism. In the US and other countries statues of controversial historical figures have either been pulled down or taken down.

However, US President Donald Trump has signed an executive order calling for protesters who target monuments to be imprisoned.

The measure says anyone who damages a public statue must be prosecuted to the “fullest extent of the law”.