Putin takes on Britain! Russia BANS all flights in direct attack on UK as tensions explode 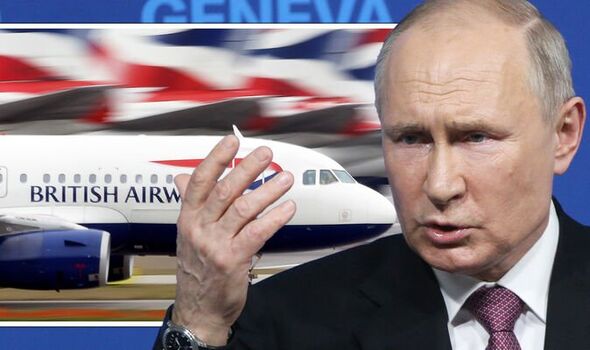 On Wednesday, Mr Putin held a surprise television announcement where he said he had “made the decision of a military operation”, despite weeks of intense diplomacy and threats of sanctions from western allies. Within a few hours of Mr Putin’s speech, Russia’s defence ministry said it had neutralised Ukrainian military airbases and its air defence systems.

His invasion comes despite weeks on intense diplomacy and threats of sanctions from western allies.

Explosions were heard across Ukraine, with its foreign minister warning a “full-scale invasion” was underway.

Due to the invasion, more than 130 people have been killed in the airstrikes as 100,000 civilians flee their homes.

Now, Russia has banned British airlines from landing at its airports or crossing its airspace, its state civil aviation regulator said on Friday.

He told Good Morning Britain: “I think that’s their retaliation for us yesterday banning Aeroflot from using and landing in the United Kingdom. ]

“That’s their tit for tat response.”