Luis Arce, the candidate for Movimiento al Socialismo (Mas) decisively won Bolivia’s presidential election, beating his nearest rival by roughly 20 points according to exit polls. It’s a remarkable turn of events after the head of Mas, Evo Morales, was overthrown in a military coup last year that installed Jeanine Anez – a bitter foe of Mr Morale – as interim President. Mr Morales had won the vote, but only after reportedly suspending counts for 24 hours before scraping the 10 percent lead that he needed to cling on to power.

The Organisation of American States (OAS), which monitored the elections, said it had found evidence of widescale data manipulation, and could not certify the result of the previous polls.

Amid the chance to replace Mas, Ms Anez pulled out of the latest election, saying she wanted to avoid splitting the vote for other candidates running against the front-running socialist party.

However, the Mas victory could spell disaster for more than just those who campaigned for change. 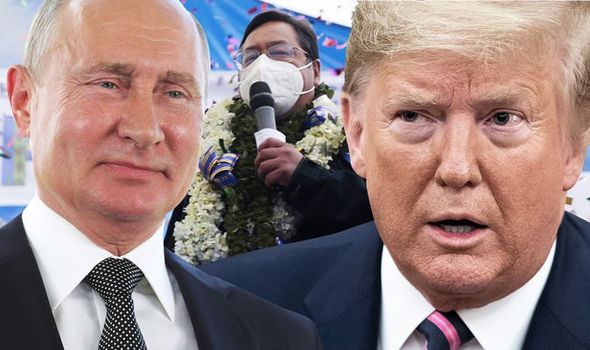 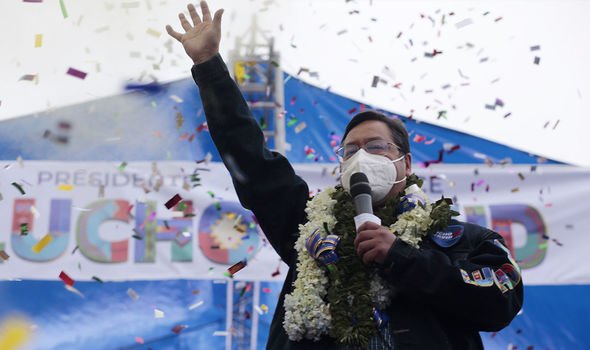 For Donald Trump’s administration and its allies in Latin America –  Mr Morales has been a fierce and lifelong critic of US “imperialism”.

Writing on Twitter in 2019, Mr Trump stated: “We support Jeanine Anez in Bolivia as she works to ensure a peaceful democratic transition through free elections.

“We denounce the ongoing violence and those that provoke it both in Bolivia and from afar.

“The US stands with the people of the region for peace and democracy.”

The President’s remarks were made hours after Mr Morales said he has the right to organise politics in his country and accused the interim government of carrying out a “coup” against his administration with foreign agents. 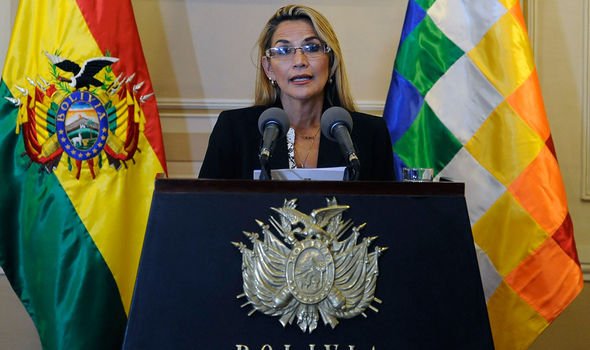 In January, the Trump administration sent an assessment team to Bolivia to discuss the possible resumption of foreign aid.

Organised by the US Agency for International Development, it looked to assist Bolivia’s interim government run a smooth presidential election.

They also discussed long-term areas of cooperation, but that plan looks shattered.

It was the second time Washington had backed a self-proclaimed interim president in a Latin American country in a year, after throwing support behind Venezuela’s opposition leader Juan Guaido.

Under the Anez administration, Mr Morales, who has sought refuge in Argentina, was barred by electoral authorities from standing as a senator. 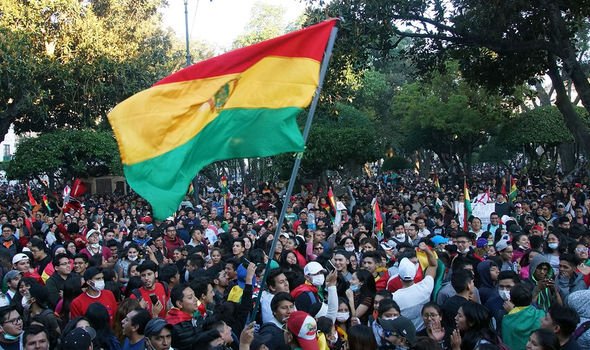 It was the first presidential election since 2002 where Mr Morales was not on the ballot.

He had been leading the Mas party’s campaign from exile in Argentina, supporting Mr Arce, and making his opinions heard through interviews and social media.

He portrayed the Anez government as a right-wing “dictatorship,” and it is now likely he will be allowed to return to Bolivia.

Mr Morales and his party’s return will be welcomed by old allies in the region such as the left-wing presidents of Cuba, Venezuela and Nicaragua.

But Russia could benefit too.

Moscow accused Mr Morales’ opposition of unleashing a wave of violence in the South American nation and said it looked like a government push for dialogue had been swept aside by “an orchestrated coup”. 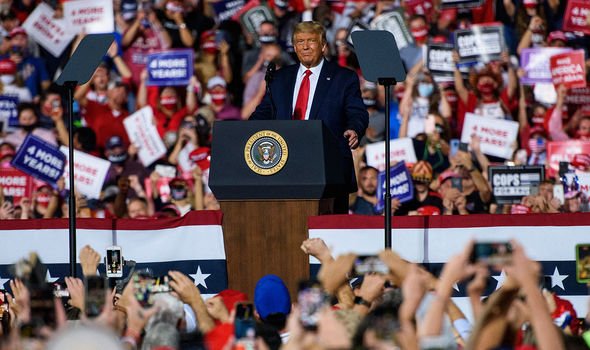 Russia’s foreign ministry said in a statement it was alarmed by the events and called on all political forces to show common sense and to act responsibly.

Mr Morales is one of a number of left-wing populists in the region who has forged growing relations with Moscow.

According to reports, the former Bolivian leader visited Russia on a number of occasions during his 13 years as President.

He was awarded an honorary doctorate by the Russian Peoples’ Friendship University and had meetings in the Kremlin with both Mr Putin and the head of Rosatom (Nuclear energy corporation) Alexei Likhachev.

One economic interest for Moscow in Bolivia is the exploration of natural gas, as state-owned Russian energy company Gazprom signed an agreement with the South American country worth £3.5billion in 2008 for access to resource-rich areas. 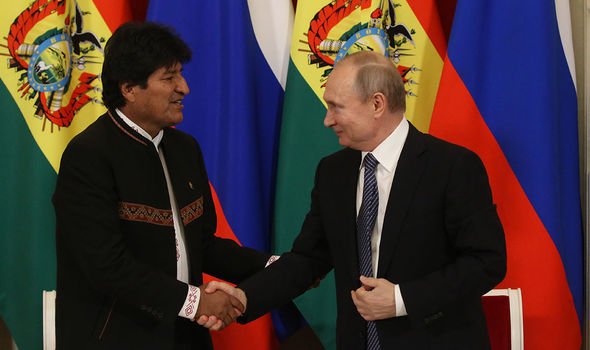 As well as strengthening energy ties, a deal in 2009 between Moscow and La Paz led to closer military ties, with Bolivia entering arms deals with Russia as the country looked to clamp down on drug-related crime.

Russian news agency TASS reported a fresh agreement on military cooperation was made in 2016.

The Venezuelan presidential crisis remains unresolved and who holds the office has been disputed since the opposition-majority National Assembly declared that Nicolas Maduro’s 2018 re-election was invalid and appointed Juan Guaido, to be acting president of the country.

Starting in June, however, it has been claimed that the Maduro regime orchestrated moves to disqualify party leaders and install its own supporters into key roles in three major opposition parties – including Mr Guaido’s.

The OAS passed a June 26 resolution rejecting the moves and the legitimacy of the upcoming December elections. 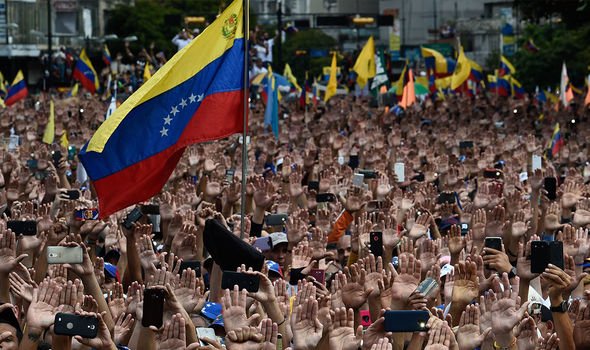 In the months that followed, the Trump administration ramped up sanctions, but they were undermined by Russia, Cuba, Turkey and India – who helped support Venezuela, according to officials in both the US and Venezuelan opposition activists.

The crisis has seen Mr Putin battle for influence and control of the situation with Mr Trump.

“More concerning” observations came when Moscow dispatched 400 mercenaries to reinforce Mr Maduro’s praetorian guard and pledged additional economic support, in what experts have warned could lead to conflict in the future.

Russian support has played a big role in keeping Mr Maduro in power, with generous loans from the Kremlin giving some relief in an otherwise crippling economic situation in Caracas.

Mr Putin retains a hefty foothold in South America, and the return of the Mas party in Bolivia could only further that dominance. 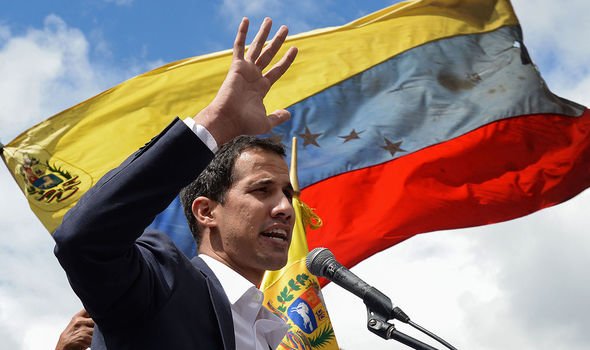 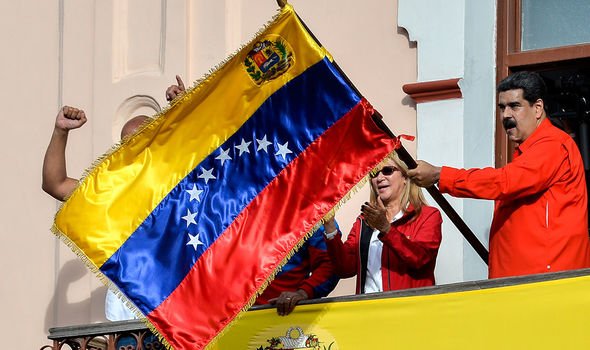 The severe crisis experienced by Venezuela led to an exponential increase in the number of migrants arriving in the US during the last decade.

Both Mr Trump and Mr Biden have tried to appeal to those voters ahead of the US election by strongly criticising the Maduro administration – referring to the leader as a “dictator”.

From the White House, Mr Trump has been a strong supporter of Mr Guaido.

Debate persists over how far the US should go to usher in a transition of power in Venezuela.

Mr Biden supports targeted sanctions on regime officials and diplomatic efforts to pressure Mr Maduro to step down, but along with many other Democrats questions the wisdom of broader sanctions or a US military intervention.

The former Vice President said Mr Trump has “taken a wrecking ball to our hemispheric ties,” pointing to his immigration policies and also to what Mr Biden sees as a “haphazard approach to the regional crisis in Venezuela”.