Amnesty claimed Qatar expelled dozens of migrant workers after telling them they were taken for coronavirus testing. 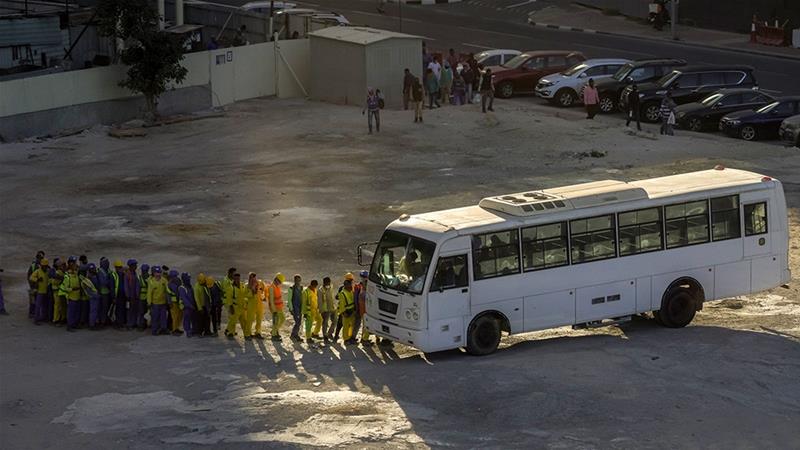 Amnesty International has accused Qatar of detaining dozens of migrant workers and expelling them last month after telling them they were being taken to be tested for the new coronavirus.

Qatar’s government denied the allegations, saying the repatriated migrant workers had been found to be “engaged in illegal and illicit activity” uncovered during inspections carried out to halt the spread of COVID-19, the highly infectious respiratory disease caused by the pathogen.

In its report published on Wednesday, Amnesty said it had interviewed 20 men from Nepal who were apprehended by Qatari police on March 12 and 13.

According to the UK-based rights group, the police told “most of the men that they were going to be tested for COVID-19 and would be returned to their accommodation afterwards. Instead, they were taken to detention centres and held in appalling conditions for several days, before being sent to Nepal”.

“None of the men we spoke to had received any explanation for why they were treated this way, nor were they able to challenge their detention or expulsion,” said Steve Cockburn, Amnesty’s deputy director of global issues.

“After spending days in inhumane detention conditions, many were not even given the chance to collect their belongings before they were put on planes to Nepal.”

As of Wednesday, Qatar had carried out nearly 54,550 tests for coronavirus, resulting in more than 3,700 positive cases. The country has also registered seven coronavirus-related deaths to date.

In March, the government sealed off a large section of the Industrial Area, home to a large number of foreign construction workers, after “early testing indicated a cluster of coronavirus cases” in the area.

In a statement responding to Amnesty’s allegations, the Qatari government’s communications office said: “During routine inspections as part of the government’s coronavirus control measures, officials uncovered individuals engaged in illegal and illicit activity. This included the manufacture and sale of banned and prohibited substances, along with the sale of dangerous food goods that could seriously threaten the health of people if consumed.

“The individuals were repatriated to their country of citizenship in accordance with Qatar’s legal system. The discovery of illegal activities preceded the Industrial Area public health quarantine.”

Amnesty said the men were “crammed on to buses, and taken to a detention facility in the Industrial Area where their documents and mobile phones were confiscated, before having their photographs and fingerprints taken”.

One Nepali man told Amnesty that the jail was full of people and they were “given one piece of bread each day, which was not enough”.

In its statement, the Qatari government denounced the “unfounded allegations”, saying they “distort the reality of the public health response and fail to acknowledge the numerous measures introduced to protect the wellbeing of citizens and residents”.

Qatar and its labour laws have been under the spotlight ever since the country was named the host of the 2022 FIFA World Cup. Its government has pledged to resolve labour disputes in the run-up to the tournament.

Qatar’s Government Communications Office told Al Jazeera last year that the country “has made substantial progress on labour reforms and it continues to work with NGOs, including the International Labour Organization, to ensure that these reforms are far-reaching and effective”.