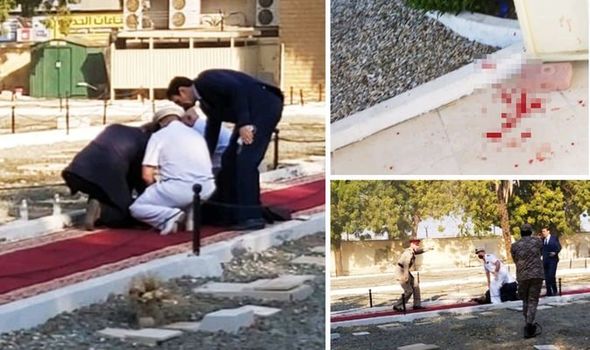 European diplomats were in attendance at the November 11th Remembrance Day ceremony service held at a Saudi cemetery for non-Muslims in Jeddah, Saudi Arabia.

It is understood that four people are reported to have been injured in the attack.

A man is reported to have thrown a grenade at a war cemetery of non-Muslims and then was understood to have drawn a knife injuring at least two people.

Pictures from the scene show a bloody trail leading away from the commemoration site, with others showing a group of three men bent over what appears to be a fourth person.

It is unclear who these people are at this time, but the attack occurred in the presence of the Consul General of France, and other French expatriates.

In a statement, a spokesman for France’s foreign ministry said: “The annual ceremony commemorating the end of World War I at the non-Muslim cemetery in Jeddah, attended by several consulates, including that of France, was the target of an IED attack this morning, which injured several people.

Damien Regnard, a French Senator tweeted: “All my support to our compatriots in Saudi Arabia and in Jeddah.”

George Malbrunot, a correspondent for French newspaper Le Figaro, tweeted that a “grenade was thrown” into the congregation.

It comes just hours after France and Germany pushed to tighten European Union borders to head off what President Emmanuel Macron called the “threat of terrorism” after suspected Islamist militants killed eight people in Paris, Nice and Vienna within a month.

The attacks refocused the EU’s attention on religious extremism, which fell off the top of the political agenda after the 2017 defeat of Islamic State forces in the Middle East.

Mr Macron said: “The threat of terrorism weighs on all of Europe. We must respond.

“To reform Schengen is to allow free movement in security.”

German Chancellor Angela Merkel sided with President Macron in demanding stricter controls along the external frontier of the Schengen area, which brings together 26 countries, including most EU members as well as Iceland, Norway, Switzerland and Liechtenstein.

She added: “It is vitally necessary to know who comes in and who leaves the Schengen area.£

Related News:
Business News:
UniCredit board holds governance talks as future of CEO in question
New Zealand already has a capital gains tax – you probably just didn’t know it
I Don’t Want to Be the Office Grandma
Who is responsible for fraudulent transactions, customer or bank?
Blackstone, JD.com among bidders for FANCL Asia business: sources
Recent Posts
This website uses cookies to improve your user experience and to provide you with advertisements that are relevant to your interests. By continuing to browse the site you are agreeing to our use of cookies.Ok