A Taliban advance in Afghanistan is undoing many of the freedoms Afghans have come to regard as normal, reports claim, amid a push for a diplomatic solution to the fighting.

There have been reports from civilians fleeing affected areas of heavy-handed treatment by the insurgents including schools being burned down and repressive restrictions on women.

They come as Taliban military chief Mohammad Yaqoob released an audio message to his fighters, ordering them not to harm government officials in territories they conquer and to leave markets and banks operating. 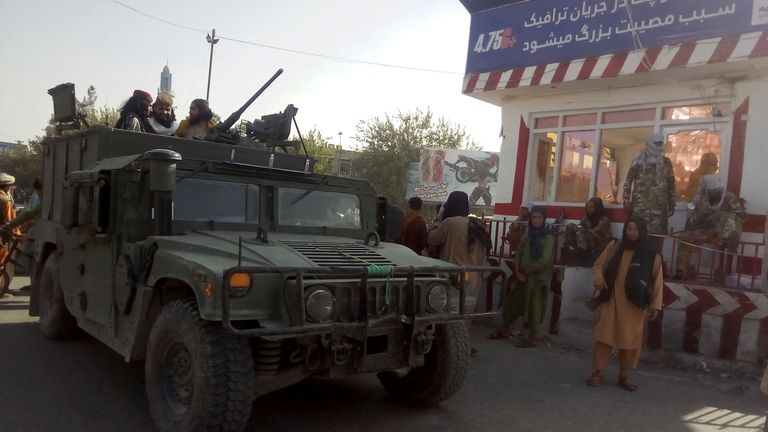 It was not immediately clear if insurgents on the ground would heed Mr Yaqoob’s instructions, however.

The Taliban has captured five out of 34 provincial capitals in the country in less than a week, including Kunduz, and is now battling the Western-backed government for control of three others, including Lashkar Gah, which was where UK forces were headquartered when they operated in Helmand province, and Kandahar, which was the site of a major ISAF coalition airport.

• US envoy Zalmay Khalilzad has been sent to Qatari capital Doha, where the Taliban maintain a political office, to “help formulate a joint international response to the rapidly deteriorating situation in Afghanistan” • US Central Command has said the withdrawal of its country’s forces is 95% complete, ahead of a 31 August deadline, but US airstrikes against the Taliban are continuing

• Six EU member states sent a letter to the bloc’s executive warning against halting deportations of failed Afghan asylum seekers amid the intensification of the conflict, saying it would motivate even more Afghans to leave

• China and Russia held joint military drills amid Chinese fears violence could spill over its border with Afghanistan into Xinjiang if the Taliban take control. Russia, Uzbekistan and Tajikistan held separate drills near the Afghan-Tajik border

Mr Khalilzad was expected to hold talks with key players, as well as “multilateral organizations” to see how to restart talks and halt the Taliban onslaught, despite a Taliban refusal to negotiate.

The US envoy was the architect of a Trump-administration peace deal with the Taliban that paved the way for the US withdrawal, a deal which UK defence secretary Ben Wallace told the Daily Mail on Sunday was “rotten” and the UK was reluctant to take part in.

Mr Khalilzad is thought to want Afghanistan’s neighbours to rule out recognising a Taliban government that comes to power by force. 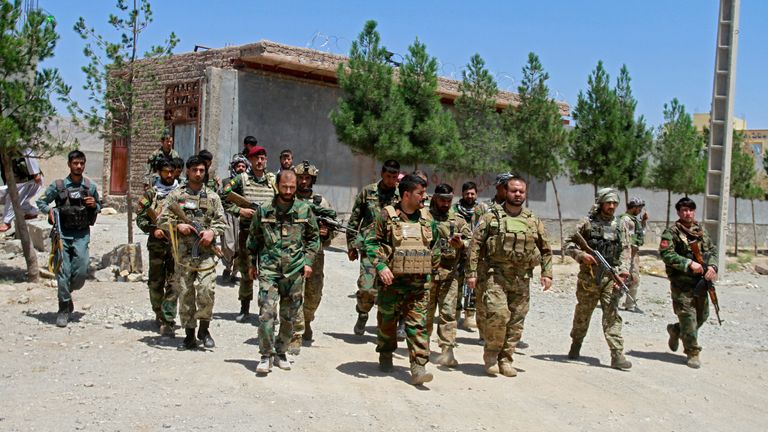 When the Taliban last ruled Afghanistan, three countries recognised its control of the country – Pakistan, Saudi Arabi and the United Arab Emirates.

Senior Afghan officials may travel to Doha in the coming days, including the head of the government’s reconciliation council, Abdullah Abdullah.

Meanwhile, the number of civilian casualties is increasing day by day.

The International Committee of the Red Cross (ICRC) said its staff has treated more than 4,000 Afghans this month across the country. “The use of explosive weaponry in cities is having an indiscriminate impact on the population. Many families have no option but to flee in search of a safer place. This must stop.”

The Taliban’s lightning speed surge began in April, when the US and NATO announced they would end their military presence and bring the last of their troops home.

On Monday, the Biden administration said it now sees the fight as one for Afghan political and military leaders to win or lose. 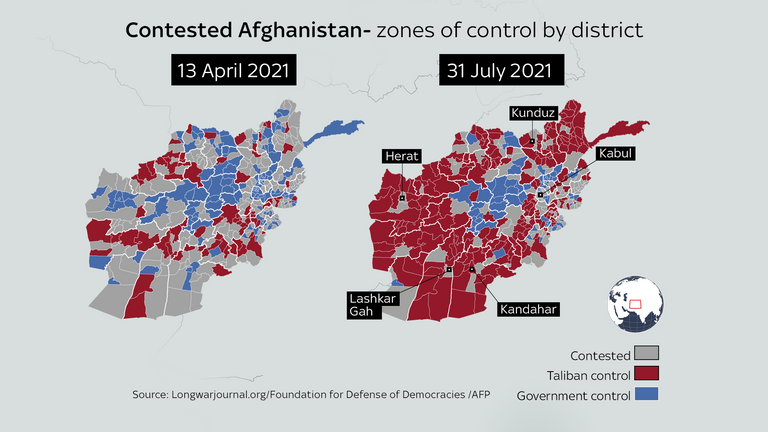 Pentagon spokesman John Kirby told reporters: “When we look back, it’s going to come down to leadership and what leadership was demonstrated, or not” by Afghans, adding: “It’s their country to defend now. It’s their struggle.”

Pakistan’s national security adviser, Moeed Yusuf, called for “reinvigorated” efforts to get all sides in the conflict back to talks, admitting that a protracted war in Afghanistan would be a “nightmare scenario” for Pakistan.

But he refused to definitively state whether Pakistan would recognise a Taliban government brought to power by force, saying only that his country wants to see an “inclusive” Kabul government.