It comes as tensions are running high between Russia and the US after Moscow accused Washington of creating a missile shield close to its borders. Royal Navy frigate HMS Kent is among the NATO fleet which crossed into the waters in the north Atlantic near the Arctic Circle.

The British ship is sailing alongside three US Navy destroyers, USS Porter, USS Donald Cook and USS Franklin Roosevelt, as well as the a nuclear submarine, support ship and long-range maritime aircraft.

They are usually permanently deployed in Europe at the Spanish military base in Rota. 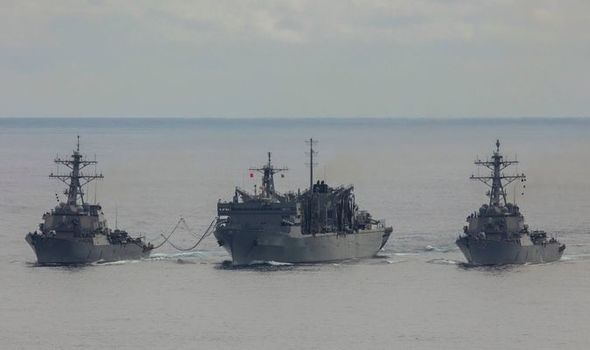 Together with the Aegis missile defence ground bases in Poland and Romania, these destroyers are components of the “Phased, Adaptive Approach for Missile Defence in Europe”, tasked with protecting the continent from ballistic missile threats.

He said the Russian Navy’s Northern Fleet was tracking the activities of a NATO vessels. 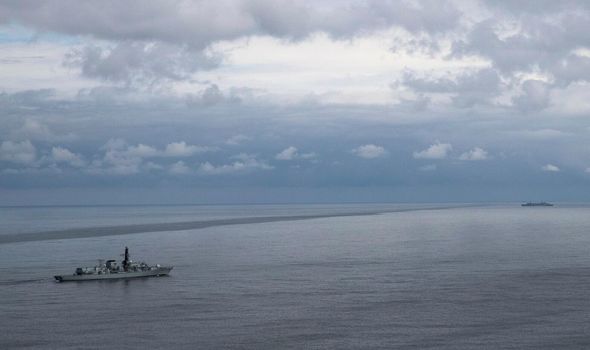 HMS Kent is a Duke Class Frigate based in Portsmouth and has a Merlin Helicopter from 814 Naval Air Squadron aboard.

Commanding Officer Commander Matt Sykes HMS Kent said: “I am delighted for HMS Kent to have this opportunity to work with our US allies.

“Conducting an exercise in the Arctic Circle is a new challenge for the ship’s company whose dedication and professionalism in preparing for this exercise have been impressive.

“The challenges of working in this extreme environment should not be underestimated but HMS Kent’s presence here continues to demonstrate the UK’s commitment to the north Atlantic and high north.”

Lieutenant Georgia Harding, HMS Kent’s Principal Warfare Officer for underwater warfare, said: “This exercise is the culmination of a high intensity period of anti-submarine warfare training that has seen a step change in HMS Kent’s readiness to conduct operations.

“Being able to work with US Navy ships, submarines and aircraft is an excellent opportunity to further hone our skills in a challenging environment.

“The waters are no warmer than 4 degrees Celsius; sea temperature, as well as salinity and various temperature layers play key roles in how effective sonar is.”