Protesters set fire to cars, buildings as National Guard deploys to quell unrest over police shooting of a Black man.

Police in the US city of Kenosha fired tear gas and pepper balls to disperse protesters on Monday as the governor of Wisconsin called out the National Guard during a second night of unrest after a Black man was shot in the back multiple times by police as his three children looked on.

The clashes erupted shortly after nightfall, when many protesters defying a dusk-to-dawn curfew gathered outside the Kenosha court, shouting and tossing water bottles at a line of sheriff’s deputies.

Some also launched fireworks at the police and set fire to vehicles and buildings in the city.

Kenosha, on the shore of Lake Michigan 65km (40 miles) south of Milwaukee, became the latest flashpoint in a summer of racial unrest after cellphone footage circulated showing police shooting Jacob Blake on Sunday at about 5pm local time.

The 29-year-old was airlifted to hospital in Milwaukee in serious condition, but local media reported on Monday afternoon that his family said he was out of surgery and improving.

Video of the encounter taken by an onlooker showed Blake walking towards the driver’s side of a grey four-wheel drive followed by two officers with their guns drawn at his back. Seven gunshots are then heard as Blake, who appears to be unarmed, opens the car door and a woman nearby jumps up and down in disbelief.

His three young sons witnessed the shooting from just a few feet away while sitting in their car, according to the family lawyer. 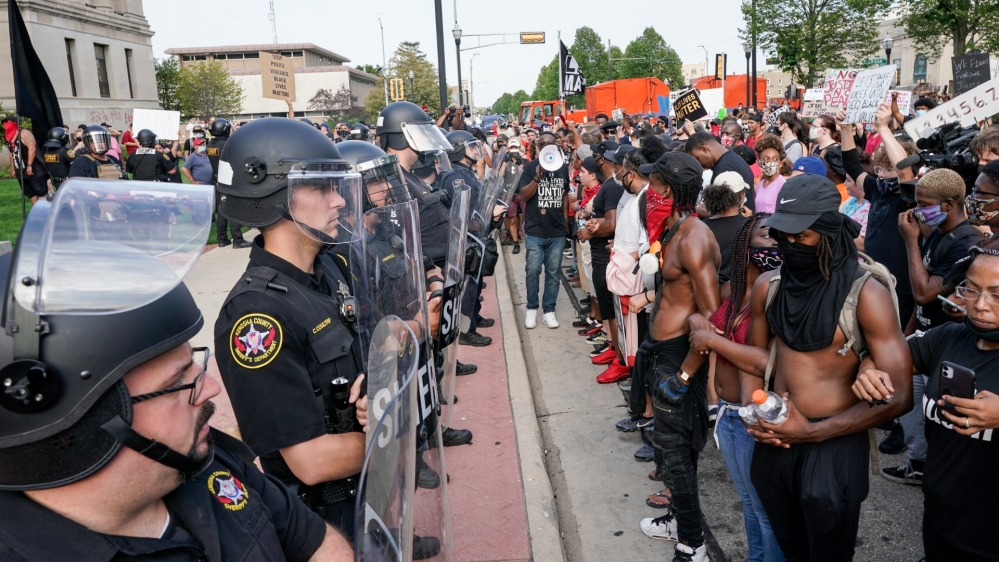 The shooting triggered protests in Kenosha late on Sunday, with demonstrators setting several vehicles on fire and damaging the county court building. The county sheriff declared a curfew from 8pm local time on Monday until 7am local time on Tuesday, saying the “public needs to be off the streets for their safety”.

‘Excessive use of force’

On Monday afternoon, hundreds of demonstrators gathered near the court, chanting, “no justice, no peace” and “say his name – Jacob Blake”, and demanding the arrest of the officers involved in the shooting.

Tensions flared after a news conference with Kenosha Mayor John Antaramian, originally to be held in a park, was moved inside the city’s public safety building. Hundreds of protesters rushed to the building and a door was snapped off its hinges, but police in riot gear drove the demonstrators back by dousing some with pepper spray.

Later at night, police fired tear gas about 30 minutes after the curfew took effect and protesters refused to disperse. But hundreds of people hung around, lighting fires and screaming at police. A short time later, several truckloads of National Guard troops were seen rolling into the centre of town.

Local media reported exit ramps leading into the city from an Interstate-94 had been closed to traffic. 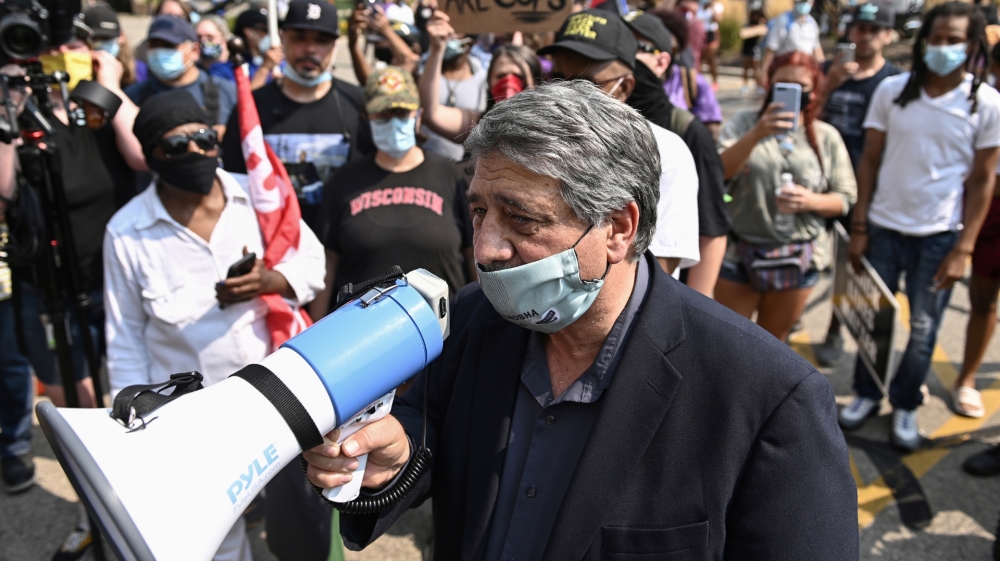 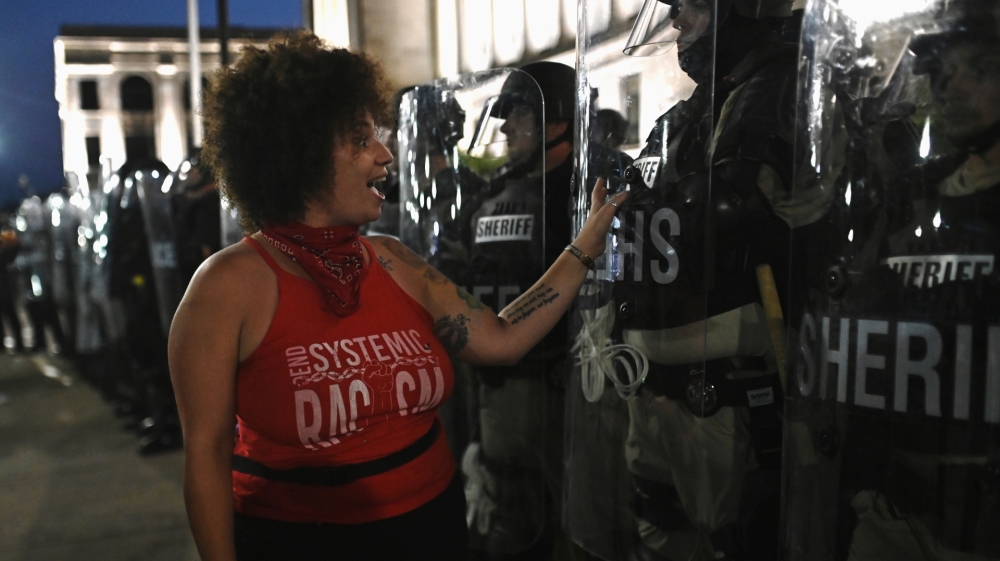 Wisconsin Governor Tony Evers said he ordered the National Guard troops to Kenosha at the request of local officials to help maintain order after activists said they were organising further demonstrations for Monday night.

He also said police had shown a pattern of “excessive use of force and immediate escalation when engaging with Black Wisconsinites”.

“We must rise to this movement and this moment and meet it with our empathy, our humanity and a fierce commitment to disrupt the cycle of systemic racism and bias that devastates Black families and communities,” Evers said in a public address.

‘Pierce the soul of our nation’

The shooting occurred three months after the May 25 death of George Floyd, a Black man in Minneapolis, who was pinned to the street under the knee of a white police officer, sparking nationwide protests against police brutality and racism within the US criminal justice system.

“The nation wakes up yet again with grief and outrage that yet another Black American is a victim of excessive force,” Biden said in a statement. “These shots pierce the soul of our nation.”

The American Civil Liberties Union of Wisconsin denounced the National Guard deployment as an unnecessary and “militarised” response to legitimate protests that “only serves to exacerbate tensions”.

Sunday’s shooting occurred as officers were responding to what they termed a “domestic incident”. Police immediately took the victim to hospital, according to a police statement. Authorities gave no further explanation of what led to the shooting.

Attorney Ben Crump, who also represented Floyd’s family, said in a statement Blake had been trying to de-escalate a domestic incident when the officers first shot him with a stun gun.

“As he was walking away to check on his children, police fired their weapons several times into his back at point-blank range,” Crump said.

“We will seek justice for Jacob Blake and for his family as we demand answers from the Kenosha Police Department,” he added.

The officers involved were placed on administrative leave while the investigation is under way, the Wisconsin Department of Justice said on Monday. 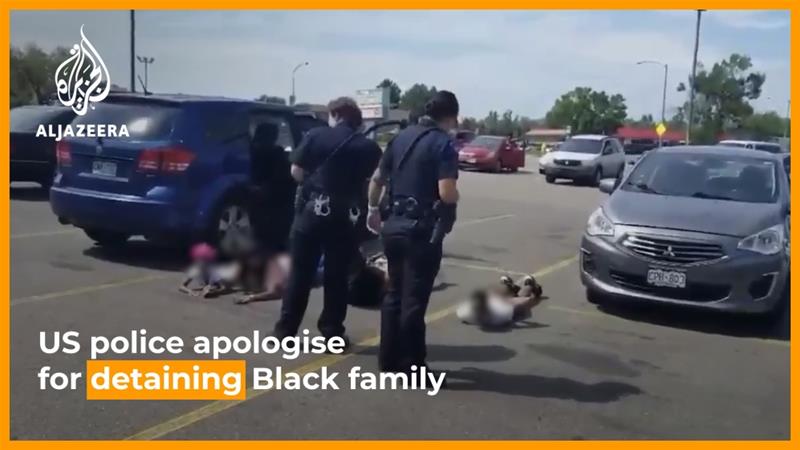