BBC Weather: Arctic air to interrupt heatwave ahead of Easter

Many southern parts of the UK are currently basking in balmy 23C conditions this week as a spring heat blast grips the nation. But bitterly cold polar air is forecast to arrive by the Bank Holiday Weekend, bringing wintry conditions including snow and subzero temperatures with it. Brian Gaze, a forecaster at Weather Outlook, shared his latest snow models, which showed snow covering the whole of the UK on Monday, April 5 (Easter Monday).

He wrote on Twitter: “Snow showers widespread on Easter Monday according to the GFS 06z.”

The latest snow probability charts from WXCHARTS also show the whole of Britain covered by different shades of red, orange, purple and dark blue, suggesting there is between 40 to 100 percent chance of snow hitting on Monday.

Temperatures could plunge to freezing lows of -7C in central Scotland on the same day, while areas in northwest England including Carlisle and the Lake District see -4C. 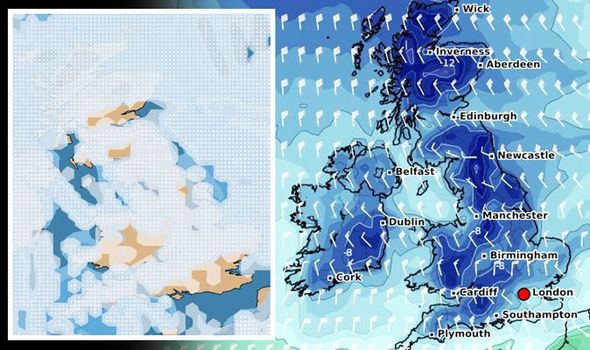 London and Essex are likely to average a freezing 0C, the charts suggest.

Mr Gaze explained the wintry conditions further in his latest forecast as he said said “all places are expected to be cold” in the UK by Monday.

His forecast said: “Temperatures this afternoon are likely to peak close to 23C (73F) which is exceptional for late March.

“Tomorrow cooler air returns southwards and the risk of snow may increase by Easter Monday. 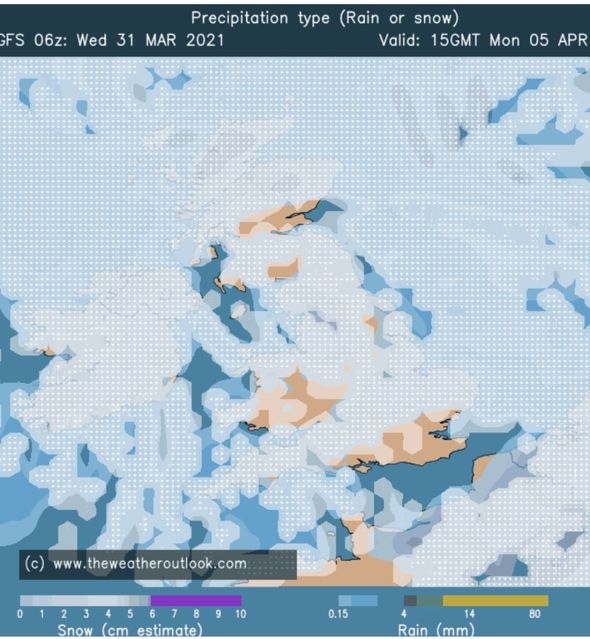 “Wednesday starts with outbreaks of rain in Northern Ireland and Scotland. Through the day patchy bursts of rain continue and over the Scottish mountains, they increasingly fall as sleet or snow.

“Good Friday is looking settled. Central and eastern areas will be chilly. In the west temperatures won’t be far from the seasonal average. A patchy frost is likely to develop overnight.

“The Easter weekend probably starts off mainly dry and mild. During Easter Sunday a band of rain pushes southwards and much colder air follows it into the north of the UK.

“By Bank Holiday Monday all places are expected to be cold and there is a risk of wintry showers. 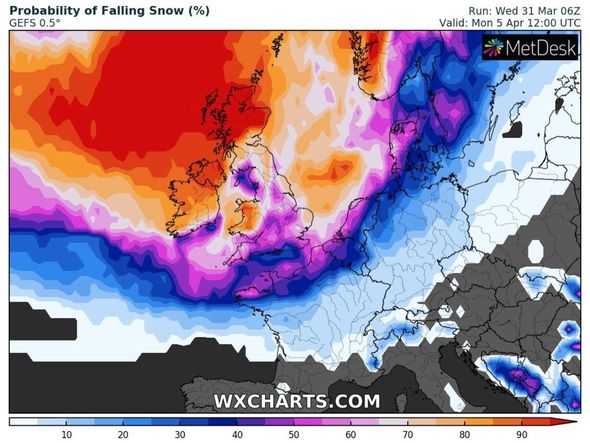 “The showery conditions probably continue on Tuesday and Wednesday. Temperatures should gradually begin to recover, but they remain well below the seasonal average.”

The forecast said: “Wednesday and Thursday will continue to see some warmer weather in southern areas, but the weather front in Scotland and Northern Ireland will begin to slowly advance southward.

“The further south it moves, the weaker it will become so most of England and Wales will likely stay dry with an increase in cloud cover. 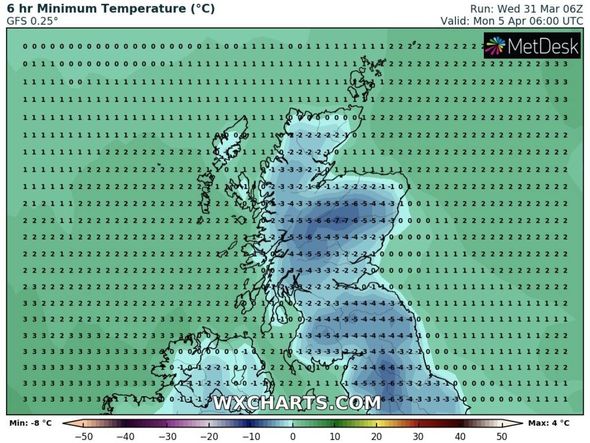 “The colder air mass behind the front will bring a stark difference from the warm, tropical air it replaces, with afternoon highs dropping as much as 10C in some places!

“This air will originate from nearer to Iceland instead of Morocco, so a fresher feel is in store throughout the country.

“Heading into the Easter holiday weekend, the weather will likely be a few degrees colder than the average for the time of year but largely dry with patchy cloud at first.

“From Sunday and into next week the weather may turn much more unsettled, with a stronger cold front arriving from the north bringing polar air from the Arctic. 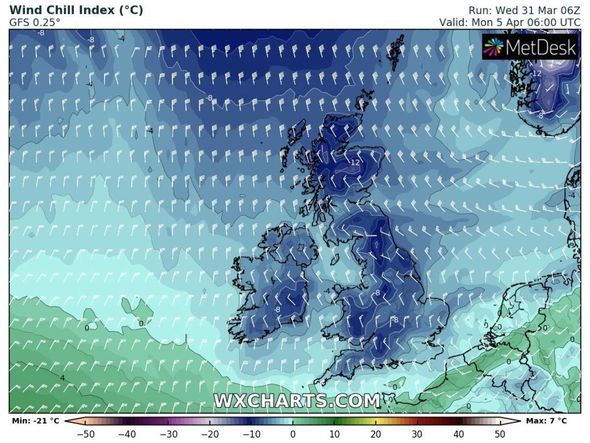 “This may only reach Scotland by Sunday with some uncertainty on the exact timing.”

The forecast between Monday, April 5, and Wednesday, April 14, said: “Continued unsettled weather into this period, and widely cold temperatures to start.

“A very cold day for all on Monday, with the north and west seeing the most frequent and heavy showers, but also likely affecting the east. The showers are likely to be wintry to low levels. 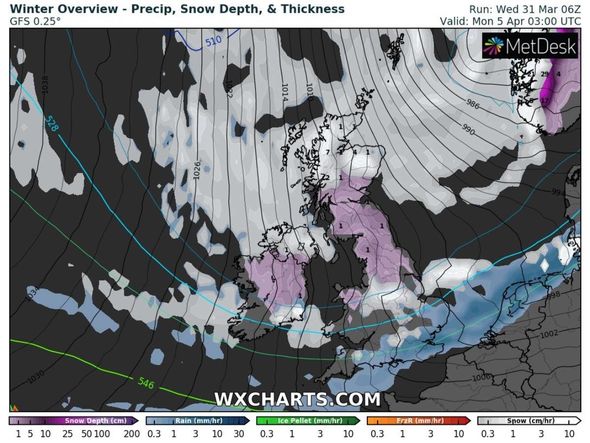 “This general picture continues into much of April, with showers most frequent around the north and east and any snow will most likely restricted to higher ground of the north later.

“Some strong winds developing for a time accentuating the cold feel. Towards the end of this period, however, mixed weather patterns begin to evolve meaning that although showers and longer spells of rain are still probable, some drier interludes are also likely.

“Temperatures are also likely to return to around average.”

The bitterly cold conditions will come in sharp contrast to warm temperatures seen across much of the country this week.

The Met Office confirmed that Tuesday was the warmest March day since 29th March 1968.