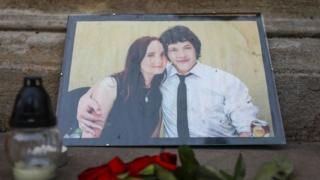 A former soldier in Slovakia has been jailed for 23 years for the killing of journalist Jan Kuciak and his fiancée, a case that sparked mass protests.

Miroslav Marcek, 37, had admitted killing Kuciak and Martina Kusnirova, both aged 27, in February 2018.

Kuciak had been investigating claims of corruption. The crime triggered the resignation of the then-prime minister.

They are standing trial in separate hearings.

Marcek was not present at the sentencing hearing at the Specialised Criminal Court in Pezinok, north of the capital Bratislava.

Presiding Judge Ruzena Szabova told the court: “It was cold-blooded and malicious. The victims did not have a chance to defend themselves.”

Prosecutor Juraj Novocky, who had asked for a 25-year jail term, appealed against the sentence.

Kuciak worked for aktuality.sk as an investigative reporter. He wrote about corrupt businessmen in Slovakia, EU subsidy and VAT fraud, and Italy’s notorious ’Ndrangheta mafia and its attempts to cultivate relationships with Slovak politicians.

Prosecutors have accused Mr Kocner, who was a focus of Kuciak’s investigative reporting, of ordering the murders – a charge he denies.

At a hearing in January, Marcek admitted to a court that he had shot Kuciak and Kusnirova dead in their house near Bratislava.

It was the first such targeted killing of a journalist in Slovak history. The killing led to widespread anti-corruption protests that forced then-Prime Minister Robert Fico and the country’s chief of police to step down.

A number of senior justice officials also quit, after it emerged that they had been in contact with Mr Kocner.

In February 2019, protests to mark the first anniversary of the killings were held in more than 50 towns and cities across Slovakia – including a demonstration in Bratislava that attracted about 25,000 people. 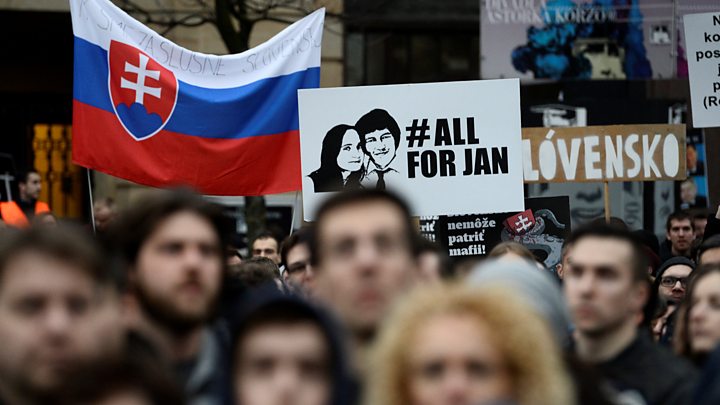