Experts believe actual tally of cases is much higher than current numbers due to country’s limited testing capacity. 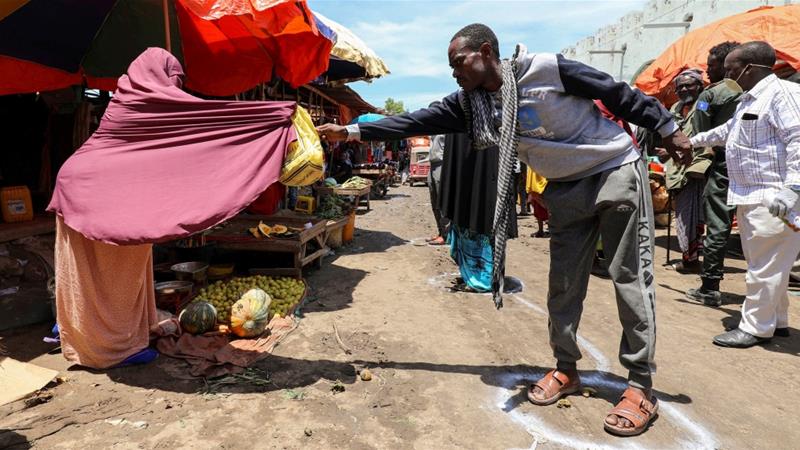 Six weeks after registering its first coronavirus case, Somalia on Monday had confirmed 480 infections out of 764 people tested for COVID-19, the highly infectious respiratory disease that has disrupted life worldwide.

The figures, given to Al Jazeera by Dr Abdirizak Yusuf Ahmed, the person leading Somalia’s COVID-19 response, raised major concerns that the actual tally could be much higher.

“We believe we are missing thousands of cases,” said Ahmed, incident manager of Somalia’s task force.

He explained that infections are going undetected because only highly symptomatic people are being tested, which also in part explains the number of positives given the sample size.

Ahmed also said the country does not have the capacity to mass test. There are currently only three labs equipped to safely test for the disease, including one in the semi-autonomous state of Puntland and one in the breakaway region of Somaliland.

“The number of tests these labs can process is very limited,” said Justin Brady, the head of office for the United Nations Office for the Coordination of Humanitarian Affairs (OCHA) in Somalia.

Doctors, community leaders, public health experts and staffers with humanitarian agencies spoke to Al Jazeera expressing worries that swaths of the population, especially in the capital, Mogadishu, might have been impacted by COVID-19. On Tuesday evening, the number of confirmed infections rose to 528.

Hodan Ali, the durable solutions and humanitarian coordinator for Benadir Regional Administration, the region in which Mogadishu sits, said no organised system for recording information has been implemented across hospitals, clinics and facilities supported by international partners.

One reason for this lapse, according to national chief medical officer Dr Mohamed Mohamud Fuge, is a lack of preparation. “We were not prepared for a pandemic. We are just starting now,” he said.

OCHA’s Brady said that in terms of treatment, Somalia’s health sector “has been reliant on humanitarian funding for decades to simply operate, with little development funding invested.

“So the capacity is extremely low, though authorities, NGOs and the private-sector healthcare facilities are doing the best they can with the limited resources they have.”

In Somalia, the challenge to contain COVID-19 is staggering. The country’s health infrastructure has been gutted by decades of conflict and instability.

A large part of the population lives in close quarters, while millions reside in decrepit settlements for internally displaced people without money to buy soap or access to regular running water. At the same time, staying at home is not a practical option for most informal workers who need to leave their homes daily to earn money and put food on the table.

“Somalia comes top of the INFORM Global Risk Index with a vulnerability score of 8.9 out of 10. This makes it the country with the weakest capacity to cope with the added stress of a pandemic such as COVID-19 in the world,” Iman Abdullahi, Somalia/Somaliland country director for CARA, a humanitarian organisation.

“With a health system already at breaking point, shortage of personal protective equipment for health staff and deep-rooted stigma of those affected, if no urgent attention is given to this looming crisis, Somalia will likely suffer the effects of the pandemic more severely than many other countries – which has already been shown by the rapid spike in reported cases on a daily basis,”  Abdullahi said.

While there is little conclusive data on the virus’s spread, anecdotal evidence suggests that it is getting transmitted across Mogadishu.

On social media, there are reports of concerns about neighbours, relatives and colleagues with the sickness.

“The Ministry of Health is doing their best, but they are not equipped, and there is no system,” said Abdisalaam Aato, a communications consultant and Mogadishu resident.

“There is no tracking at all. The Ministry of Health is just telling us how many people died, they are not sharing with the public which area [in Mogadishu] is hit. It’s scary. You see people dying.”

A health practitioner, who wished to remain anonymous, said there has been an increase in funerals in some neighbourhoods around the city.

Another doctor, who also requested anonymity, said: “Many people are dying in their homes. It’s either because the families of the sick think it’s a mere common cold, or they’re afraid hospitals will turn them away.”

Two of the 10 people interviewed did not allow their names to be used in this article, fearing reprisals from the government. All expressed an urgency that the severity of the situation in Somalia be made clear.

“The federal government of Somalia has a history of cracking down on anyone who speaks out against its policies,” said Abdullahi Hassan, Somalia researcher at Amnesty International.

Al Jazeera reached out to the office of the prime minister and the information ministry, but did not receive a response by the time of publication.

As of Tuesday, the country had registered 28 deaths related to coronavirus. Nineteen confirmed patients have so far recovered from the virus.

Martini Hospital in Mogadishu is the only medical facility dedicated to treating COVID-19 patients. Due to its limited capacity, the hospital only caters to the most severe cases.

Ali, the Benadir regional coordinator, said she believed the spread of the virus was in part due to a lack of education on the sickness and how to manage it, and in part because it was impossible to physically distance in a crowded city where most people have to go outside to make ends meet.

She expressed frustration that her team of 370 community health workers trained to sensitise communities do not have protective equipment to travel to neighbourhoods to follow up on suspected cases and spread basic awareness about coronavirus.

The government has set up a call centre where citizens can reach out for free to get information and advice – and the system has been widely successful, with Fuge, the chief medical officer, saying the centre got more than 8,800 calls in a period of 24 hours.

Ali agreed the initiative had been a great support, but noted that a call centre alone was not sufficient to spread awareness nationwide.

Somalia closed its borders in mid-March as part of measures aimed at preventing the spread of the pandemic. The government also imposed a curfew in Mogadishu earlier this month.

Somalia received 20,000 testing kits, 100,000 face masks and 1,000 protective suits and face shields, which the government is expected to distribute to various states, according to the UN. In mid-April, Turkey also dispatched a plane with medical supplies. Police, meanwhile, should receive hygiene and information packs next week.

A representative from the UN Development Programme (UNDP) said the agency is working with the government to produce mass information campaigns, including a music video and a three-day initiative during which local leaders would go around Mogadishu in cars with loudspeakers to dispel myths about the disease and promote handwashing and social distancing.

UNDP told Al Jazeera that for now, it has not implemented any of these efforts outside of Mogadishu, but that it plans to expand them.

Many areas outside the capital, however, are held by al-Shabab, an al-Qaeda-linked group fighting to overthrow the country’s internationally recognised government. This makes it nearly impossible for medical and humanitarian workers to carry out operations in those areas.

“The problem is even more worrying in hard-to-reach areas where humanitarian healthcare assistance has not been allowed to penetrate,” said OCHA’s Brady.

In the past, al-Shabab has allowed a small degree of access at a local level during cholera outbreaks, but Brady noted, “we are unaware of any specific context that would bring about such a reconsideration by localised al-Shabab elements at this time.”

The group has also carried out frequent attacks in Mogadishu and other cities, which also hinders the response to the outbreak.

Against all this, Ali said she believed civilians already accustomed to insecurity and unpredictable futures might be less open to taking precautions like social distancing to quell the disease.

“For 30 years when you’re being shelled, gunned, bombed, you develop a resilience to death,” Ali said. “People walk down the street knowing they could explode. The attitude is ‘what will come, will come’.”