Spanish children allowed outside for first time in six weeks

As national lockdown is eased, accompanied children under 14 can enjoy an hour outdoors within 1 kilometre of home. 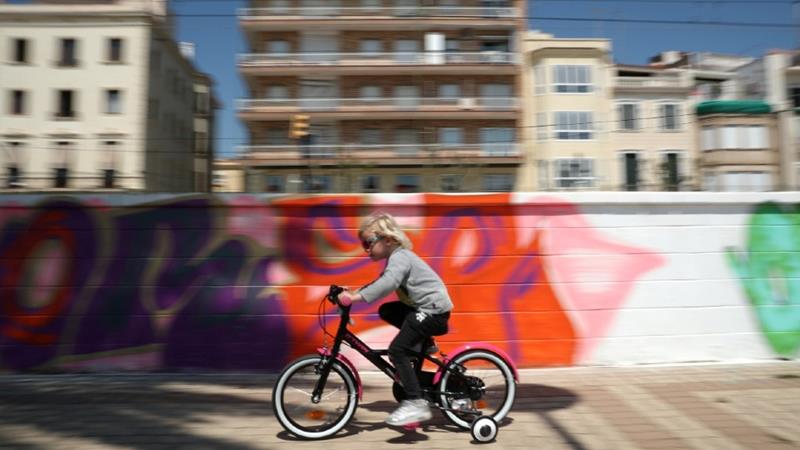 Streets across Spain resounded with the sounds of children shouting and the rattle of their bicycles on Sunday as millions were allowed to play outside for the first time in six weeks as the nationwide coronavirus lockdown was relaxed further.

Those under the age of 14 have been allowed one hour of supervised outdoor activity per day between 9am (07:00 GMT) and 9pm (19:00 GMT), as long as they remain within one kilometre of their home.

Adults can accompany up to three children, who will not be allowed to use playgrounds or share toys, and must adhere to social distancing guidelines, remaining at least two metres (6.5 feet) from other people. For the time being, schools remain closed.

The move came as Spain, which has confirmed the second-highest number of infections behind the United States, recorded its lowest daily death toll since a national lockdown was imposed on March 14.

In the past 24 hours, 288 people died and the number of new infections also dropped, providing some hope that strict measures were beginning to pay dividends.

Overall the country’s latest tally marked more than 22,000 deaths amid 220,000 infections according to John Hopkins University.

“This is a big release after 43 days of strict lockdown,” said Al Jazeera’s Marta Herrero, reporting from Madrid.

“The picture that we see today in Spain is parents with the kids, with their bicycles and scooters. We also see plenty of police patrolling and drones warning all parents and the kids to keep the safe distancing,” she said.

Spanish Prime Minister Pedro Sanchez said on Saturday that if the trends continue to slow in the coming days, adults would be allowed to exercise individually from May 2. So far, Spanish adults have only been allowed outside for essential shopping or to go to work.

“This is wonderful! I can’t believe it has been six weeks,” Susana Sabate, a mother of three-year-old twin boys in Barcelona, told the Associated Press news agency. “My boys are very active. Today when they saw the front door and we gave them their scooters, they were thrilled.”

Lucia Ibanez, 9, out for a walk with her mother, said she had missed the streets and the park and “feeling the air on your face” during the lockdown, Reuters news agency reported. “I never thought I would miss school but I really miss it,” she said.

Environment Minister Teresa Ribera said the country would begin gradually reopening economic activity in the coming weeks, adding the government was particularly concerned to ensure that tourism, which accounts for 12 percent of GDP, opened up safely.

“If we open (tourism) it has to be with total security; most employers and unions are already working on what constitutes ‘safe tourism’ so as not to unnecessarily increase our risks,” she told a news conference.

As the lockdown is eased, there is still a need to avoid overcrowding, Ribera said, noting ideas such as staggered work start times, widening pedestrian areas, and continued remote working for those able to.

Emergency health chief Fernando Simon said the country must ensure the health system could respond if there is another outbreak.

Spain needs to guard against “new waves” of the illness, he told a separate news conference. He added the aim was a gradual return to normal, cautioning “it will not be the same normality that we knew a year ago”.

A ministry document recommends that regions double their intensive-care capacity to cope with possible increases in COVID-19 cases as lockdown measures are eased.