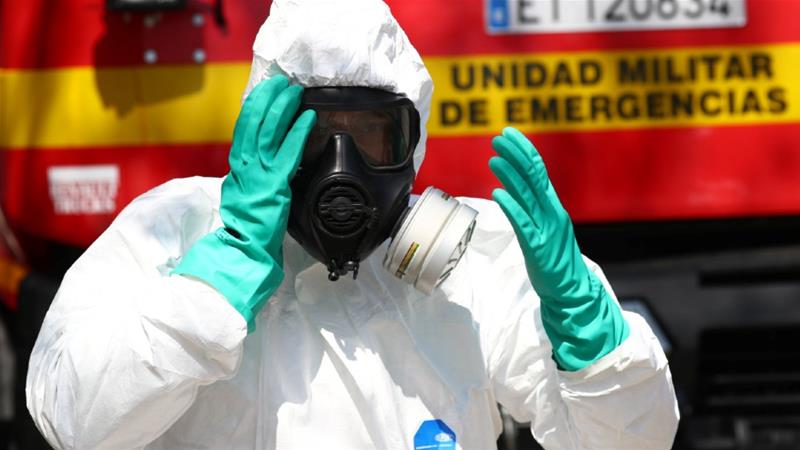 Madrid, Spain – Spain now has the world’s second-highest tally of coronavirus deaths after Italy, surpassing the number of dead in China, health authorities said on Wednesday.

The number of people who have lost their lives because of the infection in Spain has reached 3,434, compared with 3,285 in China.

Italy still has the grim distinction of holding the highest count, at 6,820.

Spanish health authorities said on Wednesday that 738 more people had died in the past 24 hours, the largest leap in deaths in one day since the outbreak started.

The news came as the Spanish Confederation of Medical Unions (CESM) presented a legal demand to Spain’s Supreme Court asking the health ministry to provide sufficient protective equipment as soon as possible.

CESM alleged the ministry had so far failed to provide professional health workers with sufficient protection to carry out their work in a manner which reduces the risk of catching coronavirus.

The complaint alleged that the ministry violated a World Health Organization recommendation which stated that doctors and nurses and other auxiliary workers should be able to carry out their duties with enough security without becoming ill.

The Supreme Court responded on Wednesday, throwing out the challenge, saying the health ministry was doing everything possible in an emergency situation to ensure the safety of workers.

Medics in other European countries, including Italy and the United Kingdom, have made similar allegations in recent weeks.

In a separate case in Madrid, a judge sitting in a local court ordered the regional government to provide sufficient protective equipment for health workers in the Spanish capital within 24 hours.

That order came after the Association of Medical Staff of Madrid launched a legal complaint against the Madrid regional government, which is responsible for providing healthcare.

In a legal order seen by Al Jazeera, the judge said the health authorities “had a legal obligation” to protect doctors, nurses and other staff.

“This order implies the obligation to protective clothing so that [staff] can carry out their work in conditions of minimum security,” the judicial order states.

“Authorities are obliged to deliver immediately within 24 hours these protective measures, so that doctors or health workers can carry out their work in a way in which they can avoid risk of contagion.”

Such a ruling is necessary, said health workers.

“All the medical staff are complaining they have not got enough protective equipment. We need to make sure they are properly protected as soon as possible,” Tomas Toranzo, president of CESM, told Al Jazeera.

Dr Natalia Silva, who works at the San Juan de Deu Hospital near Barcelona, said their staff were forced to use masks which did not offer sufficient protection.

“We have to wear masks which we should throw away once they have been used once. Instead, we have to wear them for days. We have also protective glasses that do not fit and we have to pass them around from one doctor to another,” she told Al Jazeera.

Across Spain, people have been rallying to support health workers by making masks or protective gear.

The Bon Soleil school near Barcelona was using its 3D printer to make reusable protective masks and urging parents to make protective wear for doctors out of refuse liners or old plastic bags.