Temperatures rocketed on Wednesday, reaching 28.2C in Santon Downham, making it the hottest day of the year so far. Sunny skies and warm weather have continued into Thursday, but there is a risk of thunderstorms and strong winds as a change in weather is forecast over the next few days.

For Friday, the Met Office has issued a yellow weather warning for wind, with an area of low pressure bringing winds of up to 60mph in some areas.

The Met Office tweeted: “We’ll have some strong winds on Friday thanks to an area of low pressure.

“The core of the strongest winds looks set to skirt the northwest of the UK bringing the risk of gales and gusts of 50 to 60 mph in places.

“A yellow warning for strong winds has been issued for N. Ireland.” 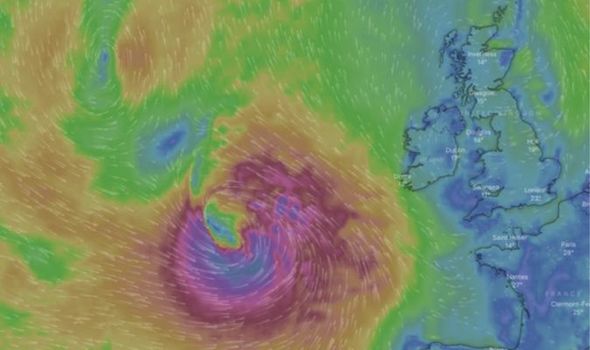 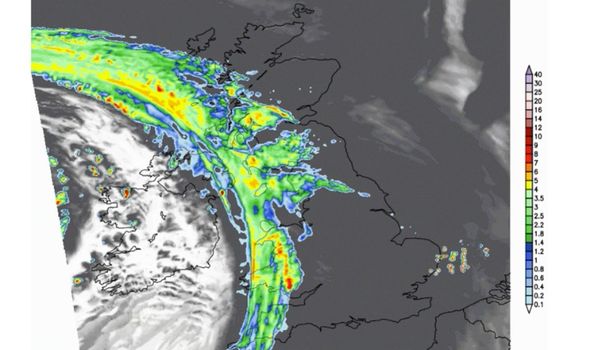 The Met Office weather warning begins at 10am on Friday, lasting until 9pm the same day.

Strong winds could cause some travel disruption, see the short term loss of power and the potential for some branch and tree damage.

The warning states: “Strong southwesterly winds will affect the area on Friday. Blustery showers will bring gusty conditions at times, with wind gusts of 50 to 60mph in places.

“With trees in full leaf, fallen branches and damaged trees may cause some localised travel and power disruption.” 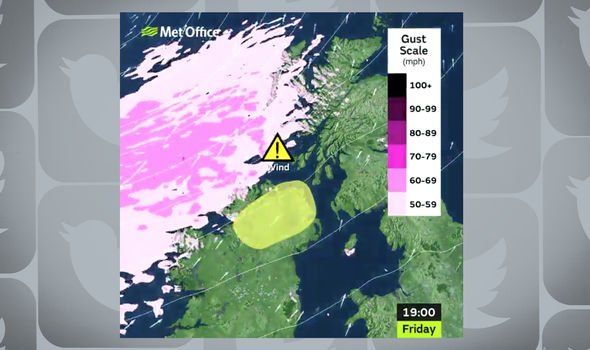 Satellite images are showing the area of low pressure track across the UK, hitting Northern Ireland first before hitting the rest of the UK.

Not only will winds hit the UK, but Netweather forecasts cloud thickening from the southwest later this afternoon and into this evening as low pressure moves closer.

The rain will also cross into Ireland this evening, moving steadily northeast and getting into the western fringes of Britain by midnight.

The heavier, most persistent rain will be reserved for the north and west, whereas those further southeast may barely even see a splash from it.

Could this weather system be named Storm Ellen?

The next storm in the alphabetical naming system is Storm Ellen, following on from Storm Dennis and Storm Jorge.

Storm Jorge was due to be named Ellen following the Met Office’s alphabetical system, however the weather system was first named by Spanish meteorological agency AEMET.

For a storm to be named, certain criteria need to be met.

According to the Met Office, a storm will be named when it has the potential to cause an amber or red warning. 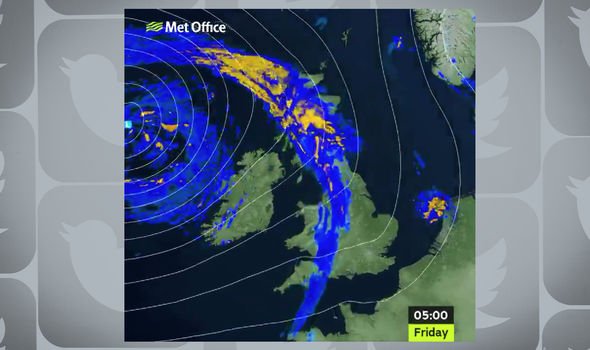 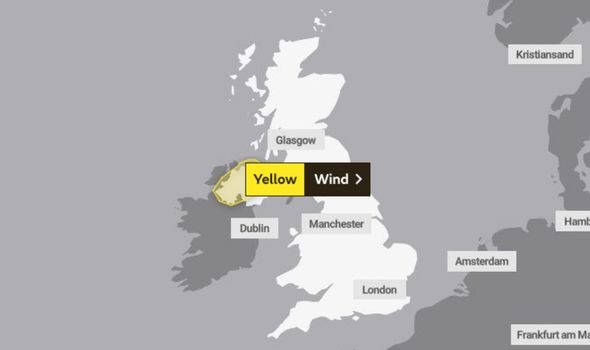 Currently, the weather system in question has triggered a yellow weather warning for Northern Ireland, and so is not strong enough to be named.

Storms can be named depending on the impact the weather they bring will have -specifically rain if its impact could lead to flooding as advised by the Environment Agency, SEPA and Natural Resources Wales flood warnings.

The Met Office writes: “Therefore ‘storms systems’ could be named on the basis of impacts from the wind but also include the impacts of rain and snow.”

According to the forecast for this weekend, the impacts from the area of low pressure will not be significant enough to cause the system to be named.

On Saturday there is a more widespread shower risk, albeit with the northwest seeing the largest share of them.

Conditions will be windy or blustery in many parts, with the northern half of Scotland seeing the strongest gusts of up to 60mph, as the low pressure moves just to the north of the country before heading into the North Sea later.

It’ll be a fresher day than Friday with temperatures generally a few degrees down.

By Sunday, high pressure will be building back into southern areas, but further north there’ll be more rain.

The weekend may end similarly to last week with a north-south divide.