Parts of the UK have been battered by thunderstorms and torrential rain following six consecutive days of plus 30C temperatures. The hot weather is forecast to continue as we head towards the end of the week, with temperatures today expected to reach 34C before dipping slightly to the mid to high 20’s for Friday and the weekend. And, as all good things must come to an end, the Met Office now has a series of yellow weather warnings out.

A yellow thunderstorm warning means there could be a risk of flash flooding, disrupted travel, power cuts and potential risk to life.

The warnings last across England and parts of Wales, Scotland and Northern Ireland into Monday next week, bookending the glorious temperatures seen for the past six days.

Chief meteorologist Steve Ramsdale said in these areas “exceptional rainfall totals could be seen of 60 millimetres in an hour with a very small chance of 150 millimetres of rainfall in three or four hours”.

The Environment Agency has five flood alerts posted for possible flooding in areas around Birmingham, and 17 flood alerts are in place across Scotland. 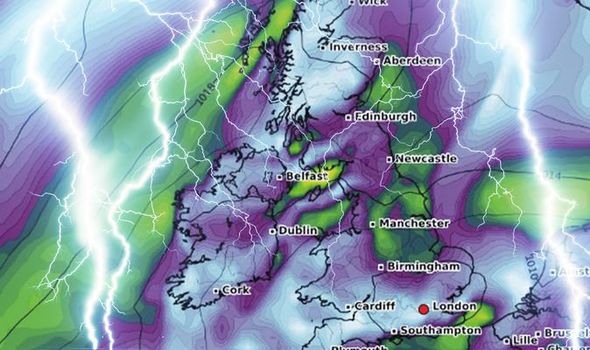 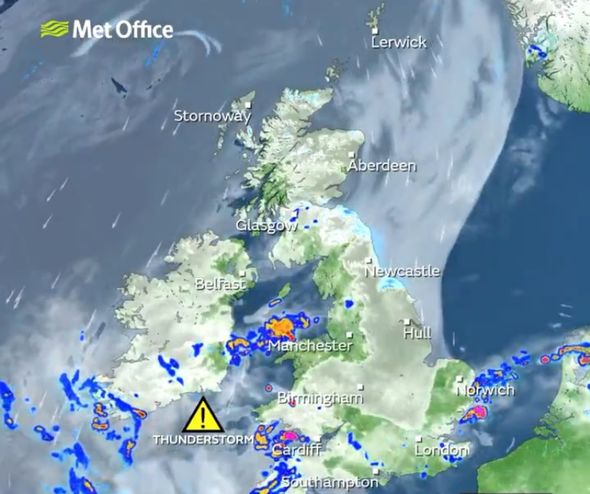 The impacts from heavy, intense rainfall were seen across the country, including Fife in Scotland, where an Amber warning was in place and a major incident was declared.

Floods have already hit Gloucester, Lancashire, and Stonehaven, and earlier this week homes and businesses were flooded in mid and west Wales.

Three people died after a passenger train derailed near Stonehaven in Aberdeenshire. 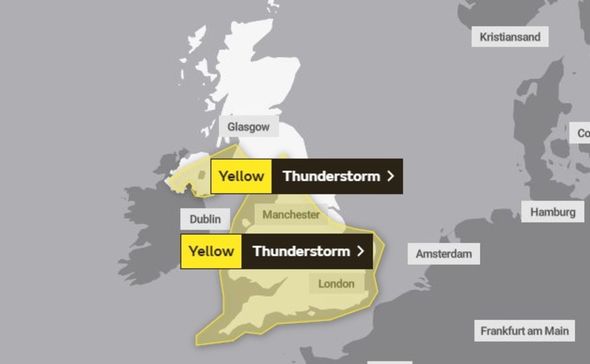 It is thought the train hit a landslide after heavy rain and thunderstorms.

Flash floods are common after a heatwave because the rain falls on ground that is hard and dry, making it more difficult for the ground to absorb water.

This water then doesn’t have anywhere to go, meaning that if the rain is heavy enough it can build on top of the soil very quickly.

The Met Office report indicates this bad spell will continue well into Monday next week.

The forecast for today reads: “Very warm or hot and close in the south with further areas of thunderstorms developing.

“Mostly dry northern England, Northern Ireland and Scotland with some sunshine in the west. Cloudier along the east coast and cooler here.”

Met Office Meteorologist, Aidan McGivern added to the forecast, said that on Thursday there will be “thunderstorms across many parts of England and Wales.

“Especially in the West and drifting their way north westwards, perhaps into northern England, southwest Scotland, Northern Ireland later on. 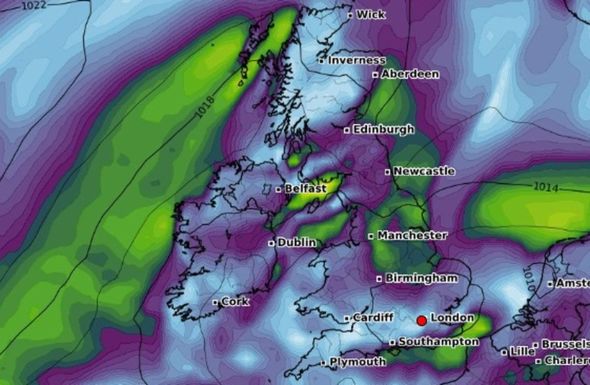 “These where they occur bring the threat of hail, lighting, torrential rainfall and gusty winds.”

He added: “During the day I think that the sun will lift temperatures.

“Once again we will see outbreaks of thunderstorms developing in a scattered nature across mainly the southern half of the UK.”

This will continue into Friday and the weekend, with most areas of England getting a mixed bag of warm, balmy temperatures and heavy thunderstorms with a potential for lightning.

Mr McGivern continued: “For many its dry, if rather humid, but still the risk once again of thunderstorms breaking out.

“And again severe thunderstorms where they occur they will bring those hazards of hail lighting and torrential rainfall.”