Suez Canal blocked after cargo ship Ever Given turns sideways

Giant container vessel Ever Given has now been causing havoc in the Suez Canal for three days, after running aground diagonally across the single-lane stretch of the southern canal. Now transit is blocked in both directions, with traffic temporarily suspended in the canal.

Ever Given ran aground on Tuesday morning after losing the ability to steer amid high winds and a dust storm.

The ship is now blocking transit in both directions through one of the world’s busiest shipping channels for goods, oil, grain and other products linking Asia and Europe.

Eight tugs, the largest of them with a towing power of 160 tons, have been trying to push and pull the Ever Given free of the canal’s banks, the Suez Canal Authority (SCA) said in a statement.

Now 13 vessels which sailed south from Port Said in a convoy on Wednesday had dropped anchor in the Bitter Lakes waiting area until navigation could be resumed.

In total 150 ships are now queuing, with experts warning of devastating implications should the delay last a week. 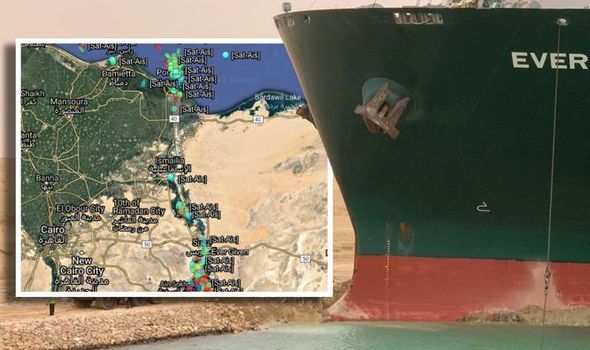 Below are the latest updates, all times in GMT 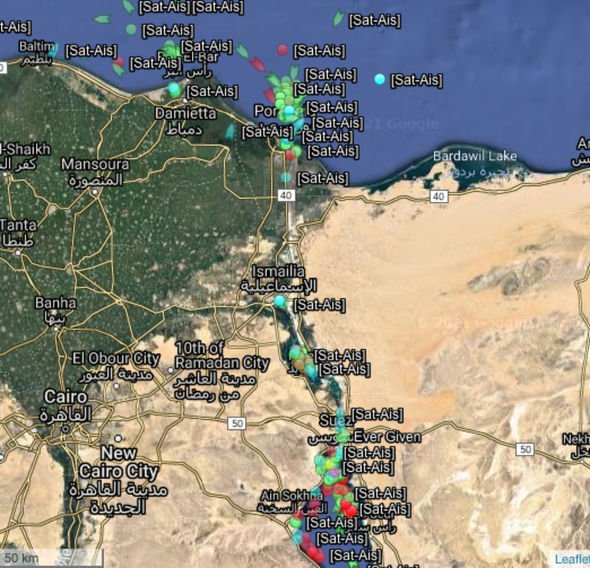 10.27am update: ‘Massive implications’ should delay last a week

Glenn Koepke, of logistics software company FourKites, told NBC News: “Typically, buyers plan at least two to five days of safety buffer with inbound ocean freight due to delays that can occur at origin or through customs clearance process.

“If they are able to clear the channel or pull the vessel to the side to allow traffic to flow through, then there should be minimal impact to consumers.

“If the vessel remains stuck for a week or more, this could have massive implications.”

10.03am update: Traffic suspended as efforts intensify to free Ever Given

The Suez Canal has now temporarily suspended traffic as efforts to the long container vessel which has blocked the waterway for three days.

Ever Given is blocking transit in both directions through one of the world’s busiest shipping channels for goods, oil, grain and other products linking Asia and Europe 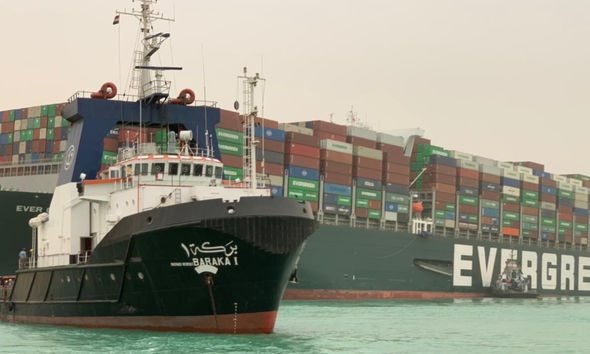 9.45am update: Could take weeks to free the supertanker

Peter Berdowski, CEO of Dutch company Boskalis, which is trying to free the ship, said it was too early to say how long the job might take.

Mr Berdowski told the Dutch television programme Nieuwsuur: “We can’t exclude it might take weeks, depending on the situation.”

He said the ship’s bow and stern had been lifted up against either side of the canal.

9.30am update: Efforts to free Ever Given resumed

Efforts to dislodge the 400 m (1,312 foot) long container vessel which has choked traffic along the Suez Canal resumed at high tide today.

Eight tugs are working to drag the vessel to deeper water, according to ship-tracking data.