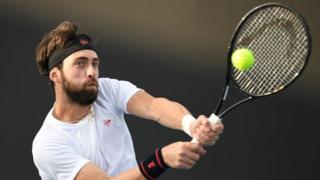 Georgian tennis player Nikoloz Basilashvili has been charged with assaulting his former wife.

Basilashvili, 28, is accused by Neka Dorokashvili of attacking her in front of their five-year-old son.

Basilashvili, ranked 27th in the world, denies all the allegations, saying that the truth will be proven in court.

A preliminary court hearing has been scheduled for 16 July.

“I feel your support and love,” the tennis player told followers on Facebook, adding that he did not want to make any further comment.

During his career, Basilashvili won three ATP titles, but is yet to progress further than the fourth round in any of the four majors.

His highest singles ranking was 16th in the world in May 2019.