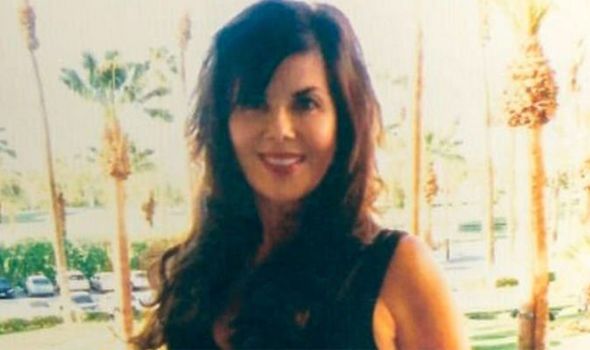 Marylou Sarkissian, 50, was dating Jason Becher, 46, on and off for five years and lived in Huntington Beach, California. After Becher turned violent to Ms Sarkissian, the mother of three took out a restraining order against her partner in August 2016. The trial took place in May this year, with Becher found guilty in June.

On August 28 2016, Ms Sarkissian called emergency services after she said Becher pushed and shoved her into the bathroom, where he’d then choked her with a towel.

Becher said an argument had escalated after they rowed about Ms Sarkissian having money that belonged to him.

After meeting up in a hotel in November, Ms Sarkissian told police officers Becher subjected her to another attack.

She then told Becher after he texted asking for forgiveness: “Why can’t you control your violence? My cheek is all swollen and I have bruises everywhere.

“You can’t terrorise me, choke me, suffocate me with a pillow and think it’s OK.”

The mother-of-three later blocked him, and on December 1 had a technician install a security system with motion-triggered cameras in her home.

Officers went to Ms Sarkissian’s home on December 13, 2016, and found her lying dead in a pool of blood after Becher turned himself to police.

Becher is believed to have confessed to a relative he attacked Ms Sarkissian on December 12.

Officers reviewed the footage from the 50-year-old’s newly set up cameras and determined Becher had tried and failed to break into her home with a crowbar before later waiting for her to open her doors.

At 12.15am, she let her dog out of the sliding door to her bedroom where Becher then took his chance to get inside her home.

On the footage, Becher was filmed attacking Ms Sarkissian to the point she sustained multiple rib fractures and a broken nose.

Officers saw on the footage of Becher spotting the boxes for the security system in her kitchen after the killing.

Becher could be heard saying: “New home security system? How did that f****** work out for you?”

About 30 minutes later, Becher was filmed leaving with a rubbish bag and it looked as if he’d got changed.

At his home, police found a bag of bloody clothes.

In May 2021, Becher was found guilty of first-degree murder of a special circumstance allegation of lying in wait.

Becher was sentenced to life in prison without the chance of parole in June.

The judge added another five years due to a prior conviction for domestic violence against another victim.

They said: “Becher, it is still not lost on the court that as you sit here before us it’s as if nothing here fazes you.

“You have not shown one bit of remorse. In fact, you look as though you don’t even understand the seriousness of this offence.”

She said: “We are all so relieved. We can breathe now.

“We can move on with our lives. We have some closure and justice for Marylou.”

Deputy District Attorney Janine Madera noted Becher had a history of domestic abuse and had repeatedly accused Sarkissian of being unfaithful and stealing his money.

She told jurors: “It wasn’t just about killing her, it was about making sure he got the last word.”

Becher was a marijuana grower and dealer at a time before the state legalisation when it was a solely cash-based business.

According to both attorneys, Becher had entrusted Ms Sarkissian with safeguarding his money.