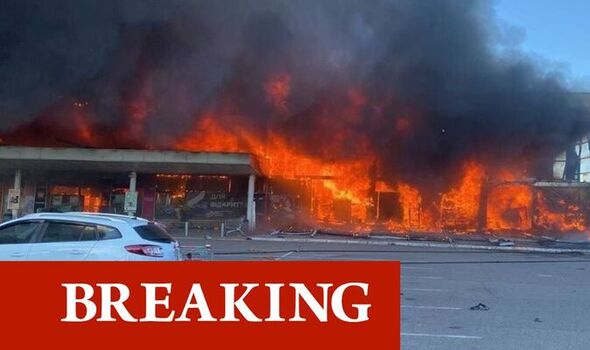 Footage on social media shows the shopping centre in Kremenchuk, which both the Ukrainian President and his aide claims was hit with a Russian missile, completely ablaze.

The president’s aide Mykhailo Podolyak said on Twitter: “Russia is deliberately firing a rocket into a shopping mall with more than a thousand civilians.

“Just in the middle of the day. Just because he wants to kill.

“To fill everything with Ukrainian blood. Russia is a terrorist state.

“Russia is waging the most disgusting war.”

According to the deputy head of the Ukrainian presidential office Kyrylo Tymoshenko, at least two people were killed and 20 were injured in the attack. Nine of these are in a serious condition, he says.

Mr Zelensky added on Telegram: “The mall is on fire, firefighters are trying to extinguish the fire, the number of victims is impossible to imagine.”

He added that the building posed “no danger to the Russian army” and held “no strategic value” to Putin’s forces.

He went on to add: “People only wanted to live a normal life, which is what angers the occupiers so much.

“Out of helplessness, Russia continues to hit ordinary people. It is vain to expect it to be reasonable or humane.”

The city’s mayor Vitaliy Meletskiy said the strike on the “very crowded” building had caused deaths and injuries, but gave no figures.