CHONBURI, Thailand (Reuters) – As children and other spectators sang to mark her 55th birthday, Thailand’s oldest hippopotamus Mae Mali chomped on an assortment of fruit and vegetables arranged in the shape of a cake. 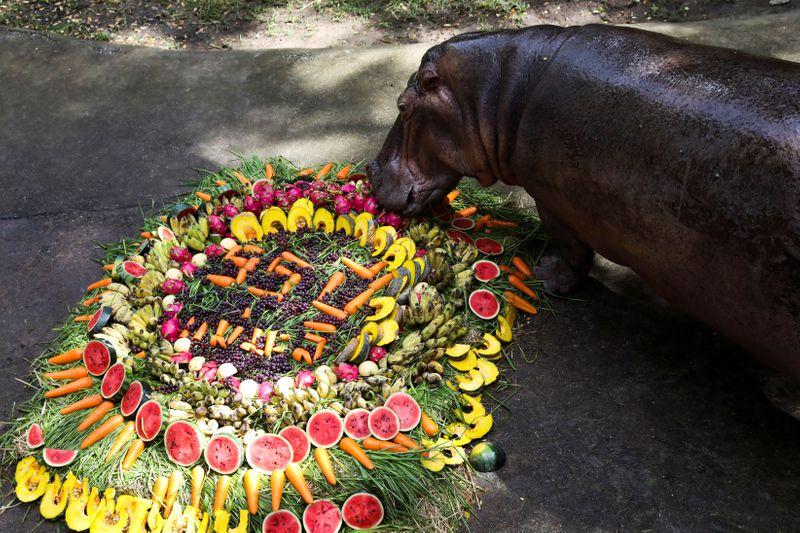 Mae Mali, which means “Mother Jasmine” in Thai, who moved to a compound at Khao Kheow Open Zoo in eastern Thailand two years ago from a zoo in Bangkok, and has already outlived a hippo’s typical life expectancy of around 40 to 50 years old.

“Mae Mali is now a grandma. We have been taking great care of her regarding her health, food, and environment,” said zoo director Attaporn Srihayrun.

“Mae Mali cannot reproduce anymore because she’s quite elderly. But we will still take great care of her so that she can become one of the longest living hippopotamus in the world,” said Attaporn.

In the wild, the hippopotamus lives in rivers and lakes in sub-Saharan Africa and habitat loss means it’s now considered vulnerable.

In the neighbouring Philippines, Bertha, considered to be the oldest hippopotamus in captivity at the time, died in 2017, aged 65.

Another hippopotamus, Lucifer, or “Lu”, is reported to have celebrated his 60th birthday at a wildlife park in the U.S. state of Florida in January this year.

With adults weighing from 1,500 kilograms (3,304 lbs) up to 3,200 kilograms, the hippo is the second-heaviest land animal after the elephant, spending the heat of the day in the water and coming ashore at night to feed on grasses and fruit.