Home » World News » The Diet Worked For Them. Now Their Pets Are on It.

The Diet Worked For Them. Now Their Pets Are on It.

Paleo, vegan, gluten-free: Owners are putting animals on human regimens and fueling a huge pet-wellness industry. But some health experts are concerned.

Darshna Shah is one of many pet owners who have created customized diets for their pets based on human wellness regimens.Credit…Ryan Young for The New York Times

Karl Malone starts his day with a breakfast that includes ashwagandha root and psyllium husk powder. His dinner is always seasoned with ground turmeric, and then he takes his joint supplements. He goes on two brisk walks daily and avoids restaurant food, as his doctor recommended he lose weight.

Darshna Shah, Mr. Malone’s owner, believes that this wellness regimen — a blend of advice from friends, her veterinarian and pet newsletters, and nutritional remedies her family grew up with in India — has greatly improved her companion’s health.

Ms. Shah, 64, a former insurance executive who lives in Cerritos, Calif., used to think that as long as her pets were housed and well fed, they would be fine. But the increasing focus on wellness, particularly among younger people, persuaded her that she needed to do more. “Their quality of life depends on their health.”

As the rate of pet adoptions in the United States has skyrocketed in the pandemic — to nearly one million in 2021, a six-year high — pet owners are devoting considerable thought and money to what their dogs, cats, hamsters, goldfish and other domesticated animals eat.

For many owners, the answer is customizing their pets’ diets to match their own eating habits.

There are pets on raw-food diets, gluten-free diets, grain-free diets, vegan and vegetarian diets. There are pets that munch on treats flavored like a turmeric latte or made with CBD, pets that never skip a probiotic or vitamin C supplement. Some owners whip up special menus at home, while others shop for the growing number of products tailored to these diets.

“He is part of our family,” Ms. Marcello said. “It would be weird to me if one of my kids started eating meat.”

Last year, Jennifer Donald suspected that the wheat-filled kibble she fed to her Labrador retriever, Moses, was responsible for his digestive issues.

Ms. Donald, 52, has celiac disease and does not eat gluten. She recently adopted the same diet for Moses, feeding him wild-caught salmon, sweet potatoes, boiled eggs, coconut oil and rice — the same ingredients she uses to make grain bowls for herself and her husband.

“It helped me to be more in tune with him, and it is helping me stay on track with my own illness,” said Ms. Donald, who teaches criminal justice at the University of Maryland.

There are no clear or simple rules for how to feed a pet. The U.S. Food and Drug Administration has cautioned about certain animal diets and regulates how pet food is manufactured and labeled, but offers much vaguer guidance on the ingredients. Veterinarians have differing opinions, and scientific research on pet health lags behind studies on humans. The internet is brimming with advice, and misinformation. It’s primarily up to owners to decide whom to trust.

The American Kennel Club, a registry for dogs, provides online educational materials and recommendations about diet, all vetted by its chief veterinary officer. So it dismays Brandi Hunter Munden, the organization’s vice president of communications, to see people turn to fad diets that she says can pose the same hazards for pets as for humans.

They can perpetuate generalizations about health, she said, promote regimens that aren’t backed by research and capitalize on people’s anxieties about not doing enough for their animals. 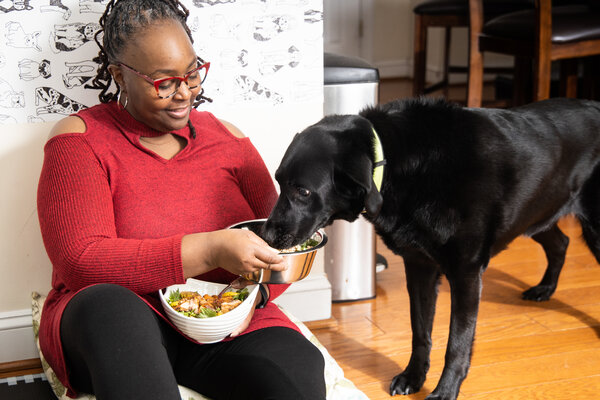 The market for what the pet-food industry calls “nutritious pet food” — higher-priced products that claim to contain premium or nutritionally enhanced ingredients — is expected to reach $17.9 billion by 2026, according to a report last year by Pet Insight, an independent analytics company. Pet wellness in general has become an even bigger industry, and has spawned a subset of social media influencers and Facebook groups devoted to refining the diets of all kinds of domesticated animals.

As human birthrates have steadily declined in the United States, many people have come to think of pet ownership as a kind of parenthood.

“It is a flex to say, ‘My dog eats as well as a human,’” said Sean MacDonald, 30, a Toronto chef who prepares elaborate meals of primarily raw food for his chocolate Labrador, Hazelnut, on his TikTok account.

The intense focus on what pets eat is also tied to the increased time owners have spent at home with their pets during the pandemic, when many people became more mindful of their own health, said Ms. Hunter Munden, the Kennel Club executive.

But imposing a new lifestyle on a loved one can become fraught when the beneficiary isn’t able to communicate — or make its own decisions, she said. “Dogs will eat anything you put in front of them, but it is not necessarily in their best interests.”

In 1999, the human and animal nutritionist Kymythy Schultze, 63, self-published a book on raw pet food called “The Ultimate Diet: Natural Nutrition for Dogs and Cats.” She had started feeding her pets that way after eliminating processed food from her own diet to alleviate health problems. The premise is similar to that of the Paleo diet: that people should eat the way their ancestors did during the Stone Age.

Many readers found her recommendations too extreme. Veterinarians, she said, told her that pets couldn’t survive on anything but canned or bagged food. “How did cats and dogs thrive for thousand and thousands of years?” said Ms. Schultze, who lives on the Olympic Peninsula of Washington. “The stuff in bags and cans hasn’t been around very long.”

The book has sold tens of thousands of copies. And raw feeding — which includes vegetables, animal proteins, bones and other uncooked ingredients — has gone from fringe to trendy, even though numerous authorities have warned gainst it.

In recent years, the Food and Drug Administration, the Centers for Disease Control and Prevention, the American Veterinary Medical Association and the American Animal Hospital Association have denounced the diet as dangerous, citing the risk that some raw food may be contaminated with harmful bacteria.

But Wes Siler, a writer in Bozeman, Mont., said the diet outlined by Ms. Schultze transformed the health of his dogs, Wiley, Bowie and Teddy. For almost four years, he has fed them raw chicken drumsticks, chicken liver and salmon, and says their skin irritations have cleared up. Mr. Siler, 41, considers kibble to be “poison to dogs,” he said — likening it to fast food, which he said he hasn’t eaten in 25 years.

He knows raw diets are controversial. “I have never ever gotten a single death threat from any of my anti-N.R.A. articles,” he said. “I probably get one death threat a week from people upset about my raw-feeding article.”

Conversations about pet diets thrive online, where many owners have grown sizable followings by posting videos of themselves feeding their pets.

Luke Hagopian, 21, has 3.6 million TikTok followers who watch him carefully feed his 45 or so goldfish frozen bloodworms, boiled spinach and boiled cucumber — ideas he picked up from talking to other fish owners online, and from reading websites like wikiHow. He also fields questions about fish diets — even though, he admitted, he is not a medical expert.

Notions of expertise in the pet-health field are changing, and embedded in many owners’ interest in wellness is a growing distrust of veterinarians.

Haley Totes started adding fresh foods like bone broth, beef short ribs, green beans and kefir to her dogs’ diets after seeing a TikTok of someone listing the processed ingredients in pet food and reading about diets online. “Some vets are wary of raw, even homemade,” she said.

Dr. Dela Cruz, 30, acknowledged that he receives a discount on pet food, but added, “I don’t recommend that company to every client.”

Online misinformation about pet health is rampant, he said, and animals are suffering because of it: Raw meats can carry antibiotic-resistant bacteria, and homemade meals can lack essential nutrients. Vegetarian diets, he said, are not suitable for most cats because they need animal protein, but can be acceptable for dogs.

What’s especially unsettling to Dr. Leah Reilly, a veterinarian in Clinton Hill, Brooklyn, is the increasingly common messaging from pet food companies that pets should eat as people do. Pets have specific dietary needs that are different from those of humans, Dr. Reilly said, and can’t detoxify and digest certain foods, like onion and garlic, in the same way their owners can.

“It’s easy to make a big contrast between, look at this fresh food you have to keep in the fridge and it is just like your meal kits, versus this giant bag of excreted kibble,” said Dr. Reilly, 41.

For example, the pet food company Nom Nom Now, which was bought in December by the global food manufacturer Mars, markets its products as “human grade.”

“You have to anchor it in something people understand,” said Alex Jarrell, a founder of Nom Nom Now, whose packaged meals contain recognizable ingredients like brown rice, potatoes and carrots. “When I eat a salad, versus fast food, I do feel better and healthier, so translating that to my pet, of course it does make sense.”

For all the pet owners who believe they’ve found the key to improving their animals’ health with these diets, there are others who feel confused and frustrated by them.

When Shom Mazumder, 29, a New York City line cook, recently picked up his Jindo and Shiba mix, Lambrusco, from an adoption agency, he was surprised to learn that the organization required him to feed the dog a raw diet.

“I haven’t really seen any scientific studies show that this is better,” he said. But he’s making it work for now.

Yishian Yao, 30, who runs an animal care business in El Cerrito, Calif., said pet wellness culture can feel not only classist, as many owners can’t afford to buy their animals fresh food and supplements, but also manipulative.

The messaging is, she said, “if you don’t do this for the health of your pet, you are not as good a pet parent.”

She wondered if the popular belief that pets are like family has actually been detrimental to animals by “putting a human value lens on their food,” she said.

“It’s not that I don’t think pets should be treated and cared for like family,” she said. “It is when we equate them to being human when they are not. Is it really what’s best for them?”