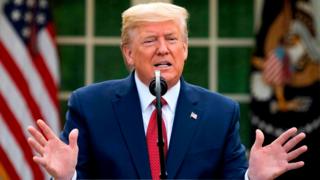 President Donald Trump has said coronavirus restrictions such as social distancing will be extended across the US until at least 30 April.

“The highest point of the death rate is likely to hit in two weeks,” Mr Trump said on Sunday, adding: “Therefore we will be extending our guidelines.”

Dr Anthony Fauci, the face of the Trump administration’s coronavirus task force, earlier warned that the virus could kill up to 200,000 Americans.

As of Sunday evening, 2,436 deaths had been recorded in the country in relation to Covid-19, according to figures collated by Johns Hopkins University.

The United States overtook both China and Italy last week for the number of reported cases.

Dr Fauci said that it was “entirely conceivable” that millions of Americans could eventually be infected and that between 100,000 and 200,000 could die.

What did Trump say?

Speaking during the latest Coronavirus Task Force press briefing at the White House on Sunday, the president said that measures such as social distancing were “the way you win”, adding that the US “will be well on our way to recovery” by June.

Suggesting that the “peak” of recorded deaths in the US was likely to hit in two weeks, Mr Trump said that “nothing would be worse than declaring victory before victory is won – that would be the greatest loss of all”.

He said the decision to extend social distancing was made after he heard that “2.2 million people could have died if we didn’t go through with all of this”, adding: “Now the number will be much lower.”

The figure he was referring to appeared in a coronavirus impact report published by Imperial College London on 16 March.

Mr Trump had previously said that Easter – the weekend of 12 April – would be a “beautiful time” to be able to open at least some sections of the country.

The president also talked on Sunday about the medical response. He said that “rapid testing” had been approved to get Covid-19 results within five minutes, and that doctors, nurses and other healthcare workers would be tested.

Meanwhile, an anti-viral drug – hydroxychloroquine – was being administered to 1,100 patients in New York, he said.

“Let’s see how it works, we may have some incredible results.”

Mr Trump said that experts were also looking at blood transfusions to treat the sick, using the blood taken from people who had recovered.

What about the shortage of equipment?

Earlier on Sunday, Mr Trump accused hospitals in some states of “hoarding” ventilators, face masks and other critical medical supplies.

“We do have a problem with hoarding… including ventilators. Hospitals need to release them – in some cases they have too many, they have to release medical supplies and equipment,” he said.

Hospitals “can’t hold [ventilators] if they think there might be a problem weeks down the road”, he said, alleging that some were “stocked up”.

The availability of ventilators is a major concern among health professionals as demand has surged with the spread of the virus. A number of states have warned that they will soon not have enough to treat patients suffering from Covid-19.

President Trump has ordered a car manufacturer in Detroit to produce more of the medical machines to satisfy demand.

The new coronavirus can cause severe respiratory issues as it attacks the lungs, and ventilators help to keep patients breathing.

Governors of states across the country, from New York to Washington, have warned of dwindling medical supplies and pressure on hospitals.

What is the latest from elsewhere?

More than 30,000 people are now confirmed to have died worldwide after being infected with the new coronavirus.

Some of the latest major global developments include: