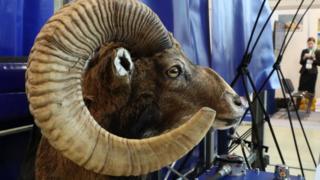 Donald Trump Jr shot a rare mountain sheep and met the country’s president, according to the Citizens for Responsibility and Ethics in Washington (Crew).

Most of the money went to their Secret Service protection, the group said.

Researchers say the Trump family take 12 times as many trips as the Obamas.

The Crew report accuses the Trump family of draining the Secret Services’ finances with their average of 1,000 more trips per year, many for leisure, than the previous first family.

“This trip is just one example of the expenses the Trump family is incurring with American taxpayers, and if just one of Don Jr’s trophy hunting trips cost more than $75,000, it’s staggering to think how high the total bill must be,” the report’s authors conclude.

An employee of Mr Trump Jr told CNN that the eight-day trip last August was privately paid for, with the exception of his security detail.

As a child of the US president, Mr Trump Jr is permitted to use the Secret Service for his protection but is not required to do so.

The Argali sheep, famous for its long horns, is considered near-threatened according to the Red List of Threatened Species.

During the trip, Mr Trump Jr posted photos of himself on horseback, and him and his son outside a traditional yurt dwelling, and praised the country’s “incredibly pristine land”.

He has faced criticism for his defence of gun rights and the images he posts on social media of trophy hunting trips around the world.

Some more pics from my incredible adventure in Mongolia last week! I have a lot more to come from this incredibly pristine land stay tuned. #mongolia #adventure

Some more pics from my incredible adventure in Mongolia last week! I have a lot more to come from this incredibly pristine land stay tuned. #mongolia #adventure