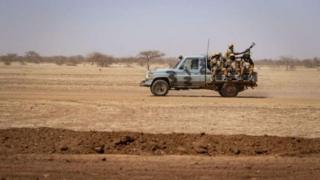 Twelve people arrested on suspicion of terror offences have been found dead in their police cells in Burkina Faso.

The prosecutor for the town of Fada N’Gourma said 25 people had been detained overnight on Monday, and “unfortunately, 12 of them have died during the course of the night in the cells they were being held in”.

The cause of death is currently unknown. Security sources told AFP news agency it may have been asphyxiation.

An investigation has been launched.

In a similar episode in July 2019, 11 people accused of drug trafficking were found dead in a cell belonging to the national police’s drugs squad.

It comes less than a month after Human Rights Watch (HRW) said it believed Burkina Faso security forces had executed 31 unarmed men in the northern town of Djibo, a few hours after arresting them in a counter-terror operation.

Burkina Faso, a landlocked country in West Africa, is fighting Islamist insurgents with ties to al-Qaeda and the Islamic State group.

More than 300 civilians have been killed by militants, according to HRW, while the government has killed several hundred for allegedly supporting them.

Most of the 12 dead men were ethnic Fulas, a group often accused of jihadist links, AFP reports. Burkina Faso’s security forces have been repeatedly accused of mistreating them.

A local human rights organisation said a Fula teacher accused of having terrorist associations was found dead in a police station in Ouagadougou, the capital of Burkina Faso, on 2 May.