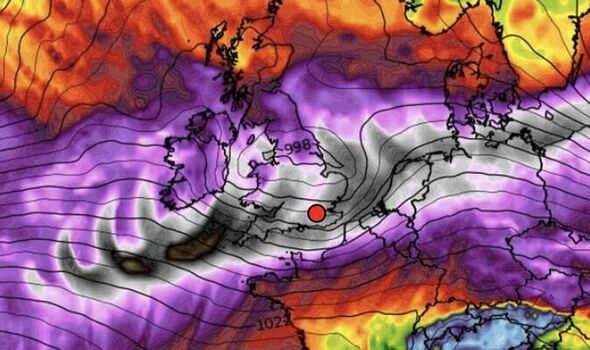 Savage winds from Dudley will scour the UK today and tomorrow before Eunice blasts in on Friday with torrential rain and a wintry deluge.

Coastal regions are on alert for severe flooding amid warnings the storms will throw huge waves tumbling over sea defences.

It is the first time in four years two Atlantic lows forecast within 24 hours of each other­­ have been named by the Met Office–the last being Storm Ali and Storm Bronagh on September 18 and 20, 2018.

Storm Eunice shows signs on Friday of deepening rapidly, dropping more than 24 millibars in 24 hours in a process of explosive cyclogenesis, earning the title ‘weather bomb’ or ‘bomb cyclone’.

Exacta Weather forecaster James Madden said: “Storm Dudley and Eunice are going to bring some very stormy and unsettled weather through the rest of the week.

“While the main impact from Dudley will be from the winds, there is a risk for notable and widespread snow throughout Friday and into the weekend as Eunice arrives.”

Government forecasters have issued a three-day raft of warnings for deadly winds to down power lines, close bridges and rip roofs from buildings.

Separate warnings have been issued in the last hour across northern England where blizzards threaten up to a foot of snow.

Met Office Meteorologist Alex Deakin said: “Dudley will affect the north of the country while Eunice will mainly affect the southern half of the UK.

“We are expecting winds of 80 or 90mph from Dudley, but it won’t be just winds this week, but also some heavy snow.

“This is certainly going to cause travel disruption and bring down trees, and we are expecting power cuts.

“Winds will also be strong enough to drive big, powerful waves, so some dangerous flooding will be a risk with these storms.”

BBC weather forecaster Carol Kirkwood said: “Inland where we’ve got the yellow warning, we could see 60 to 70mph.

“These are damaging wind speeds which could cause travel disruption, and they could also cause damage to buildings and uproot trees.”

Dudley is forecast to plough through Britain on Wednesday night into Thursday with Eunice hot on its heels ready to strike ahead of the weekend.

While the focus of Dudley coming from a more northerly direction will be winds, Eunice will arrive from the south loaded with snow.

Drivers have been warned to keep up with forecasts through coming days and postpone non-essential journeys.

National Highways head of road safety Jeremy Phillips said: “We’re encouraging drivers to consider if their journey is necessary or could be delayed until conditions improve.

“If you do intend to travel, then plan your journey and take extra care, allowing more time for your journey.

“In high winds, there’s a particular risk to lorries, caravans and motorbikes so we’d advise drivers of these vehicles to slow down.”

RAC Breakdown spokesperson Rod Dennis added: “As Dudley departs, less than 24 hours later Storm Eunice will arrive introducing very unsettled conditions to much of the rest of the country.

“Some areas may see snow accompanying the strong winds, a particularly dangerous combination and one that has the potential to be extremely hazardous for drivers.”

John Hammond, meteorologist for weathertrending, explained the path of Eunice will dictate which parts of Britain see snowfall.

He said: “It’s going to turn lively with some impactful winds particularly across northern parts of the UK.

“It gets quite interesting on Thursday night into Friday, and we could see a spell o snow which will be most likely across northern England and north Wales.

“The direction of the low will be critical to the snow.”