Home » World News » UK hot weather MAP: Britain to sizzle in 95F – will YOUR area be hotter than Ibiza today?

UK hot weather MAP: Britain to sizzle in 95F – will YOUR area be hotter than Ibiza today?

Britons are bracing for the hottest day of the year so far today with forecasters predicting a scorching 35C in some areas. July has thus far seen just 66 percent of its usual sunshine according to the Met Office. The month has been much rainier than normal but today will see a return to sunnier skies as Britain is forecast to sizzle in scorching temperatures this afternoon.

On Friday, the UK woke up to extremely sunny conditions and the weather forecasts show it will soon become even hotter.

Clouds will spread across parts of England later bringing a risk of a few thunderstorms to parts of eastern and southern England.

Western parts of the UK will turn cloudier with rain at times.

Tonight, there is a risk of thunderstorms for parts of England and, perhaps, a few parts of Scotland this evening, but drier later.

Further west, there will be a few showers, but it will be another warm night in the east. 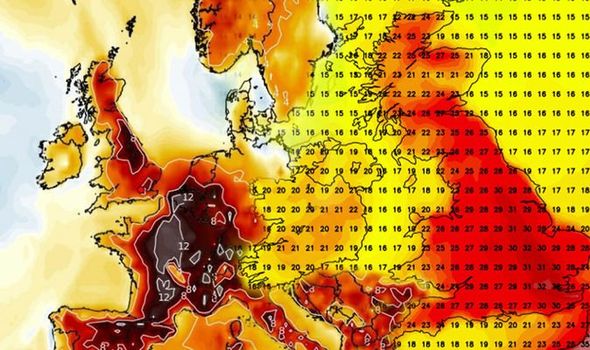 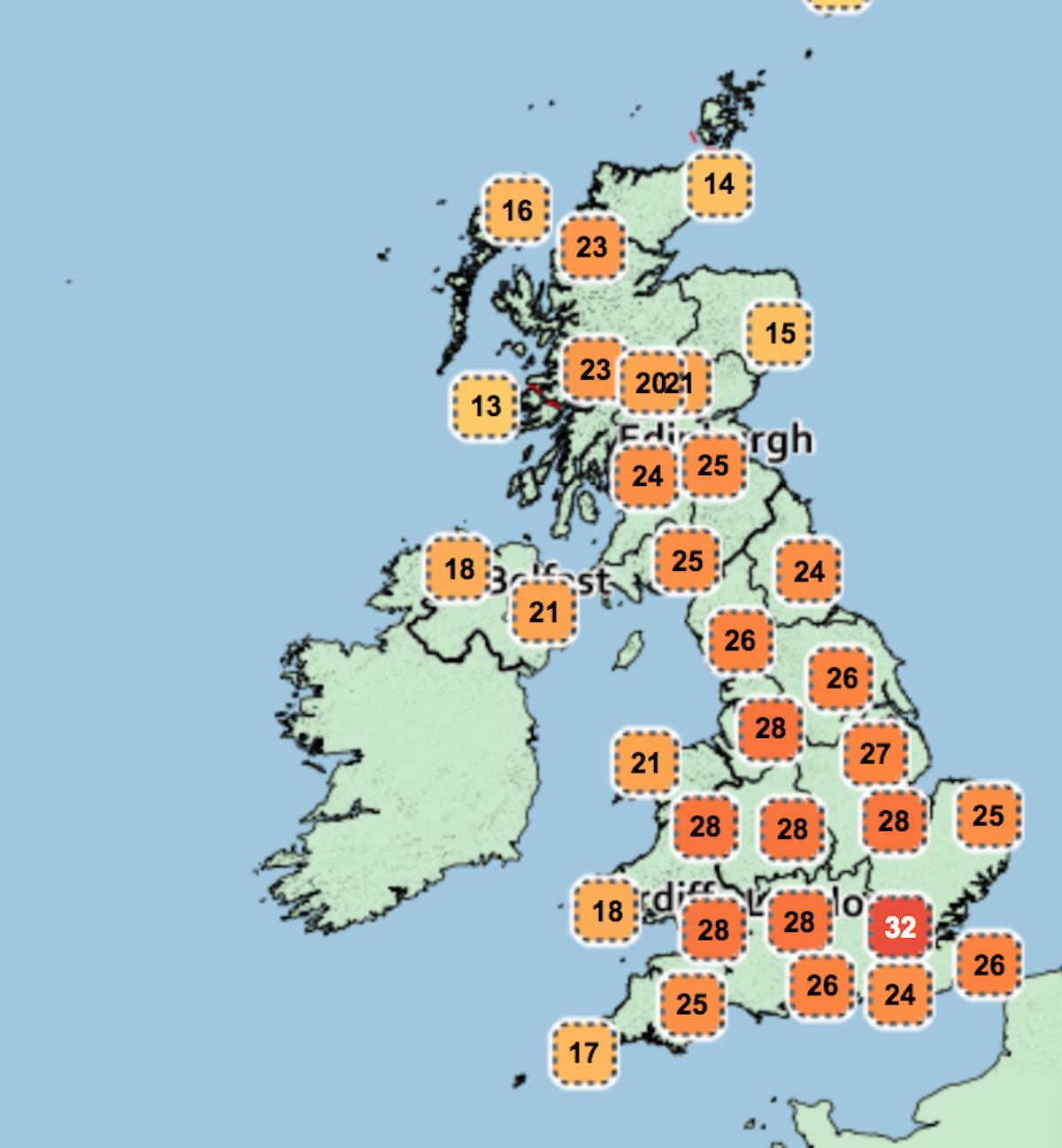 Popular tourist spots on the continent including Ibiza, Lisbon and Berlin fall short of the UK high, reaching 33C, 30C and 25C respectively.

The hot weather will be widespread across south-eastern areas in Kent and Cambridgeshire, where temperatures will stay around 33C to 34C.

Elsewhere across the UK, temperatures in the 30s will be seen.

Manchester is expected to peak at 32C and parts of Wales will also reach 30C. 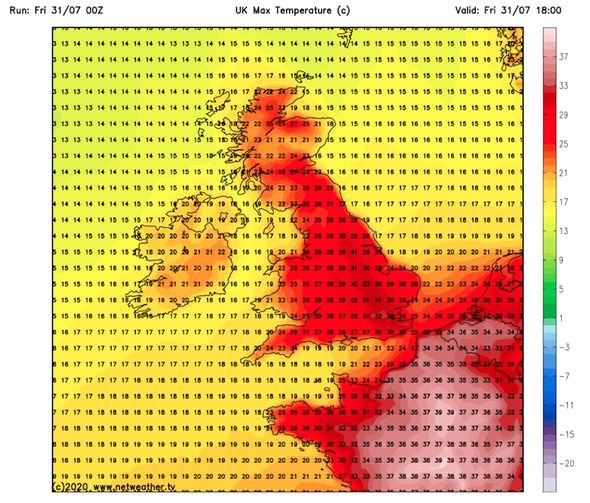 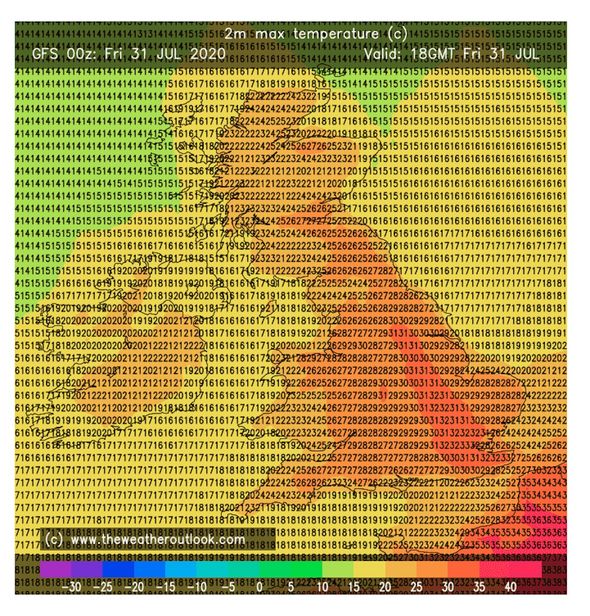 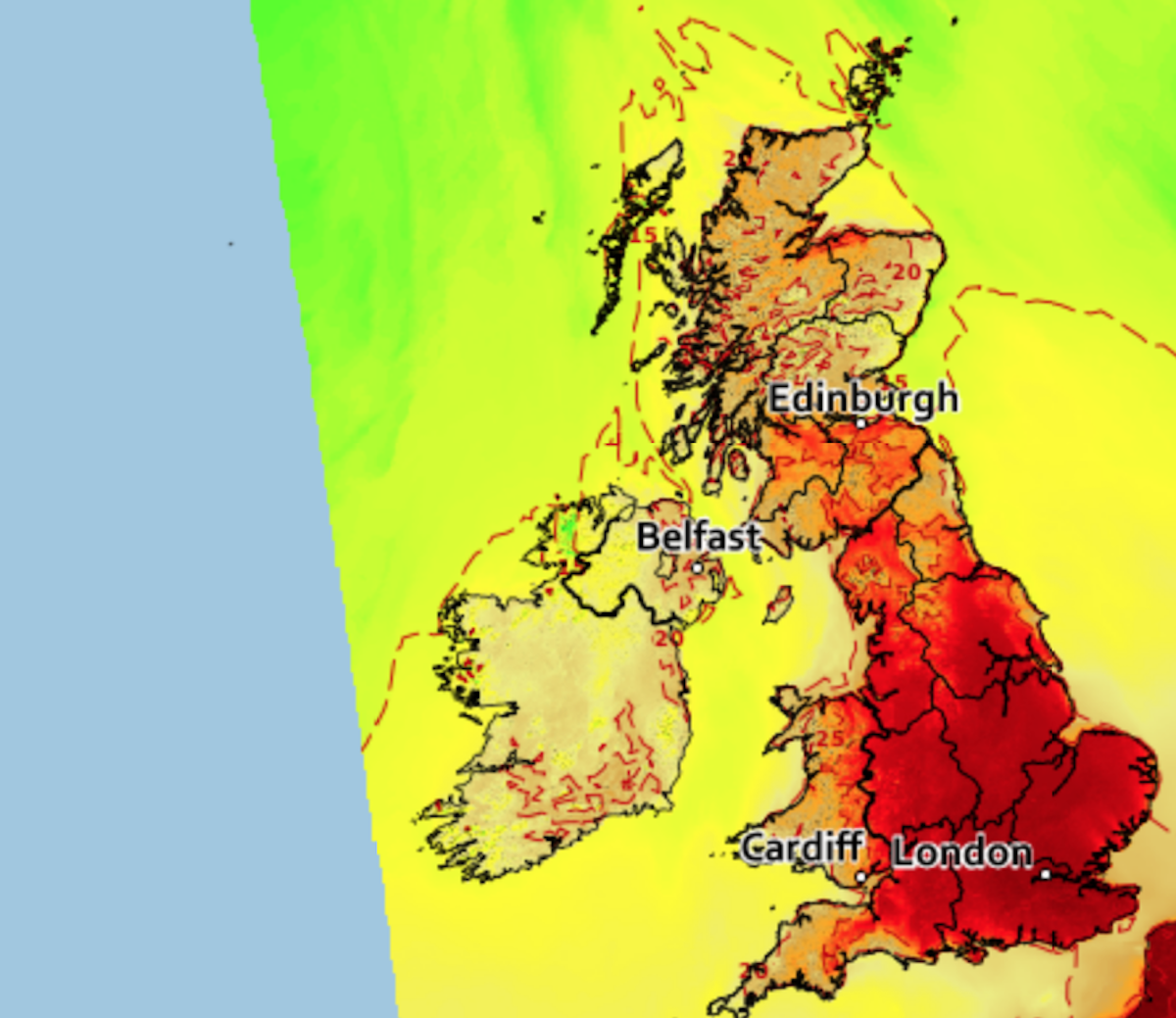 Currently, the highest maximum temperature record in July has been 28.5C recorded at Heathrow Airport on July 17.

This means today at 35C could become the hottest day of the month and in fact the year.

And with the UK preparing for a scorching few days of sunshine, the bookies have now cut odds from 5/4 to just 4/5 on this going down as the hottest summer on record.

Alex Apati of Ladbrokes said: “With Britain baking, it’s looking increasingly likely this goes down as the hottest summer ever.”

The 34C and 35C forecasts are predicted in “isolated spots” in the southeast of England.

Most weather forecasts, however, predict a scorching 33C is forecast for the southeast area generally.

The midlands will bask in highs between 25C and 29C.

Northern Scotland’s highest temperature will be around 17C, but areas in the lower regions of the country will roast in 25C heat in both Edinburgh and Glasgow. 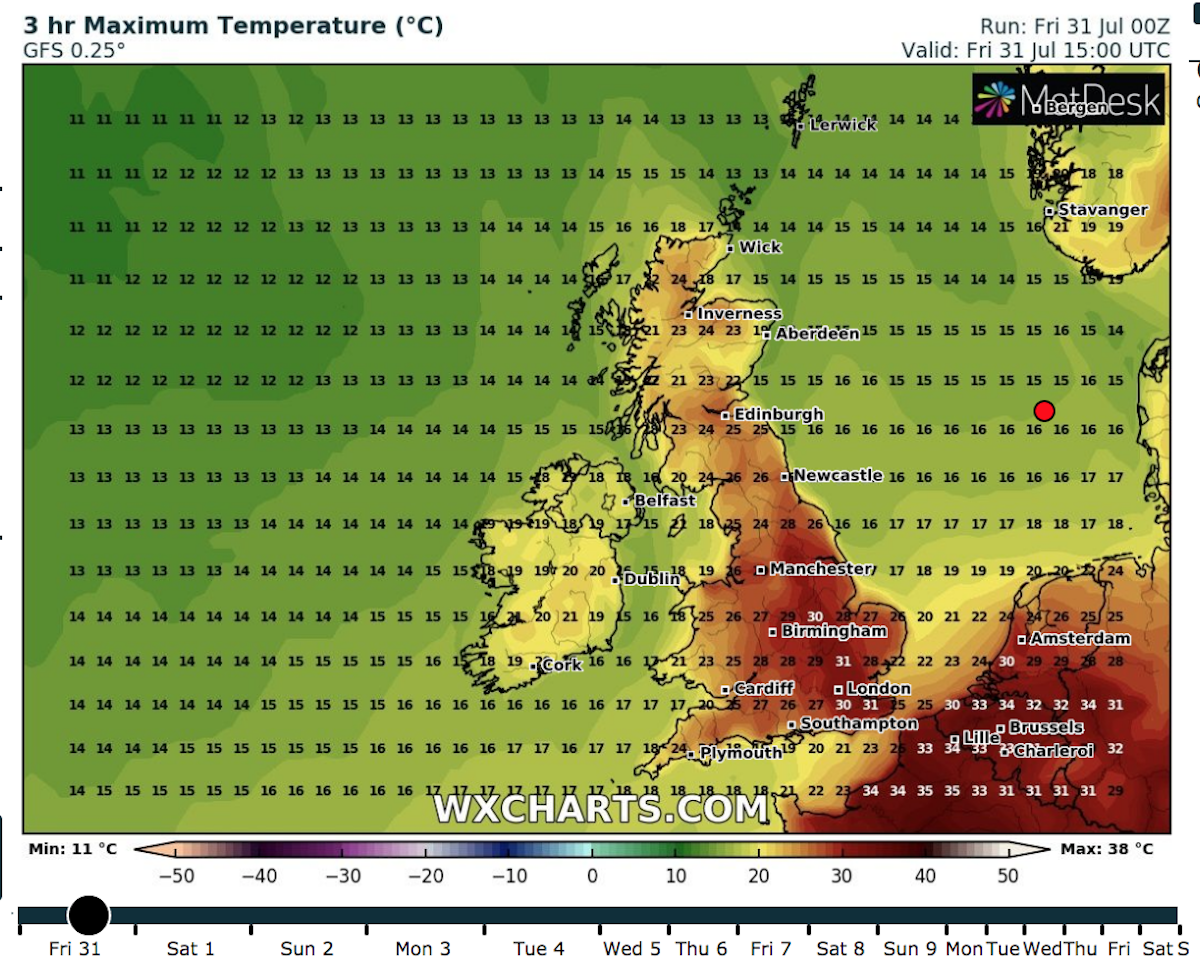 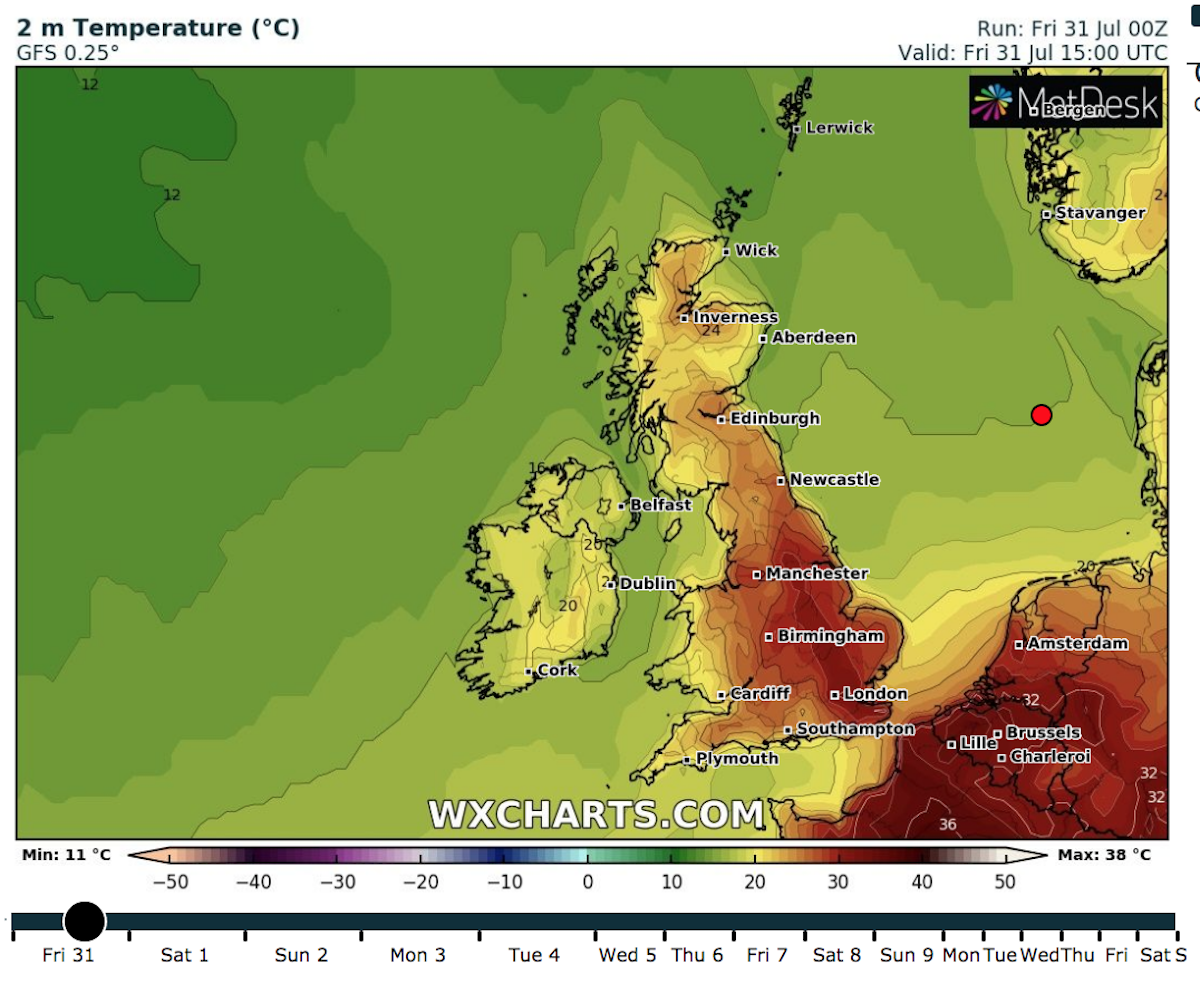 Sadly for warm weather fans in Northern Ireland, the region will not see temperatures rise beyond 22C.

Today’s scorching conditions come after a rather dull start to July, with the UK average temperature for this month currently on course to be just 14.1C.

This is just one degree less than the long-term average at 15.2C.

And it seems we won’t get a great start t August either, thanks to a cold-weather front which will hit Northern Ireland today and will spread to the rest of the UK on Saturday, bringing cooler temperatures then.

The front will result in temperature drops of up to 10C overnight with highs of 26C and 21C in London and Manchester respectively, on Saturday.

From Sunday into next week conditions will take a turn becoming more unsettled.

On Sunday there will be unsettled with rain and showers expected in most places, but also some decent dry and sunny spells.

The most persistent rain will be in the south on Monday and the northwest on Tuesday.

There are some fairly strong signals that unsettled conditions are likely to continue for northwestern parts of the UK as we move through the first half of August, with outbreaks of rain and scattered showers for many.

Further south and east may remain more settled and drier to begin during the first 10 days of August, though the unsettled conditions may spread southeastwards towards the end of this period.

There should still be some drier and brighter spells of weather in between the outbreaks of rain in the northwest, though the driest conditions will always be more likely in the southeast.

Temperatures are most likely to be slightly below average for the time of year, but perhaps near-normal towards the southeast.