UK long-range forecast: Boiling heatwave to END in days -but hot weather to return in July

So far this week Britons have enjoyed bright sunshine and temperatures of up to 30C. Wednesday and Thursday will see the mercury rise even further, with temperatures expected to reach as high as 34C in southern England. But the heatwave is set to end this weekend, as thunderstorms and unsettled conditions move in.

Much of the UK is set to bask in sizzling temperatures today, as the mercury rises to the early 30s.

Met Office Chief Meteorologist, Dan Suri said: “From Wednesday temperatures will widely reach into the high twenties Celsius and it’ll be hot across much of the UK, especially central and southern England where we could see highs of 30 to 34 Celsius.

“This hot weather is expected to last until at least Friday and so heatwave conditions are likely to develop for some areas this week.”

The sizzling conditions are due to air arriving from the Atlantic and warming up as it moves across the UK. 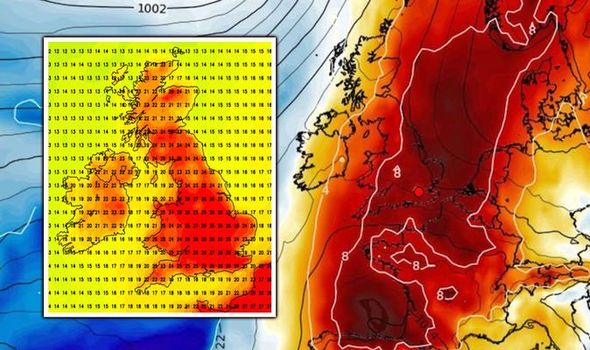 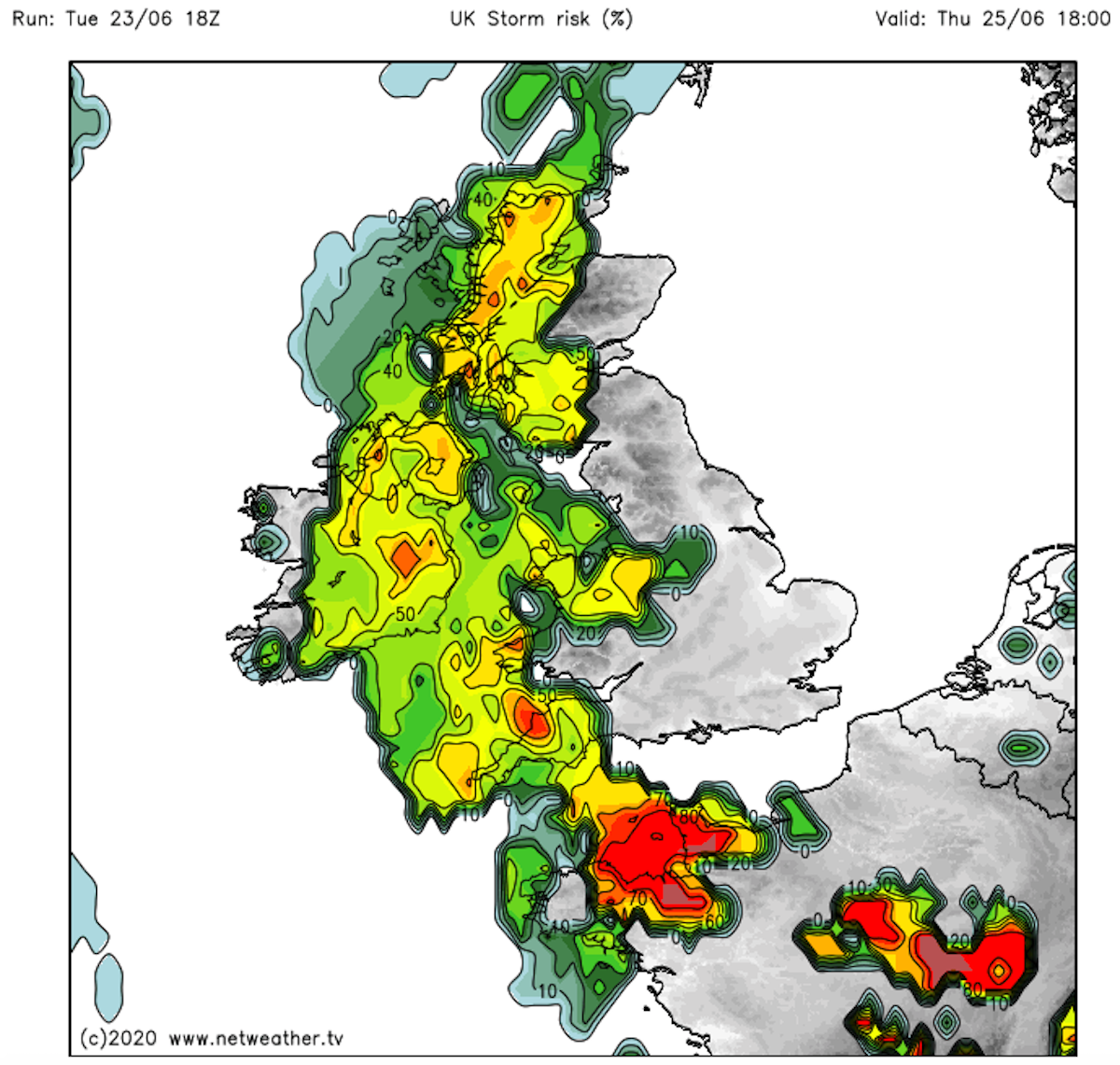 Friday isn’t meant to be quite so warm, with temperatures settling in the mid 20s.

The slightly cooler weather is likely to be accompanied by thunderstorms and heavy rain.

Low pressure is expected to move in from the west, sparking thunderstorms and heavy downpours.

The unsettled conditions are set to move across the whole of the UK, with Friday looking particularly wet and windy. 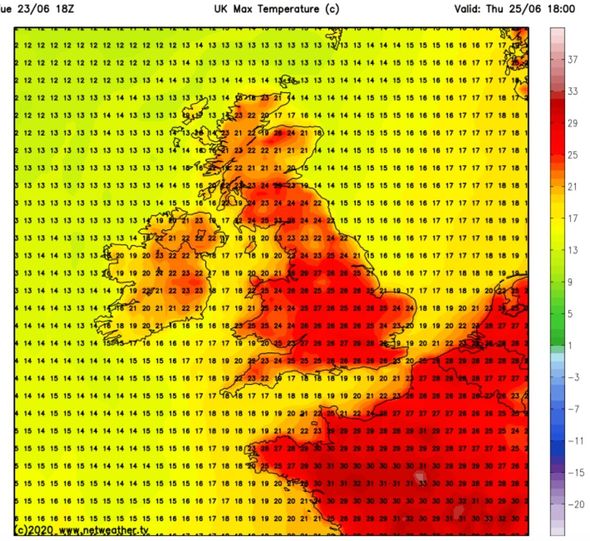 Netweather forecasters expect up to 18mm of rain to fall in the midlands on Friday afternoon, with much of the UK seeing a few scattered showers.

The weekend weather forecast is similar, with warm temperatures expected to be accompanied by strong winds and showers.

The Met Office said: “Hot in the east on Friday but a thundery breakdown during the day will lead to fresher, breezier conditions developing over the weekend with showers or longer spells of rain.”

The rest of the month will be characterised by unsettled conditions, cooler temperatures and risk of showers. 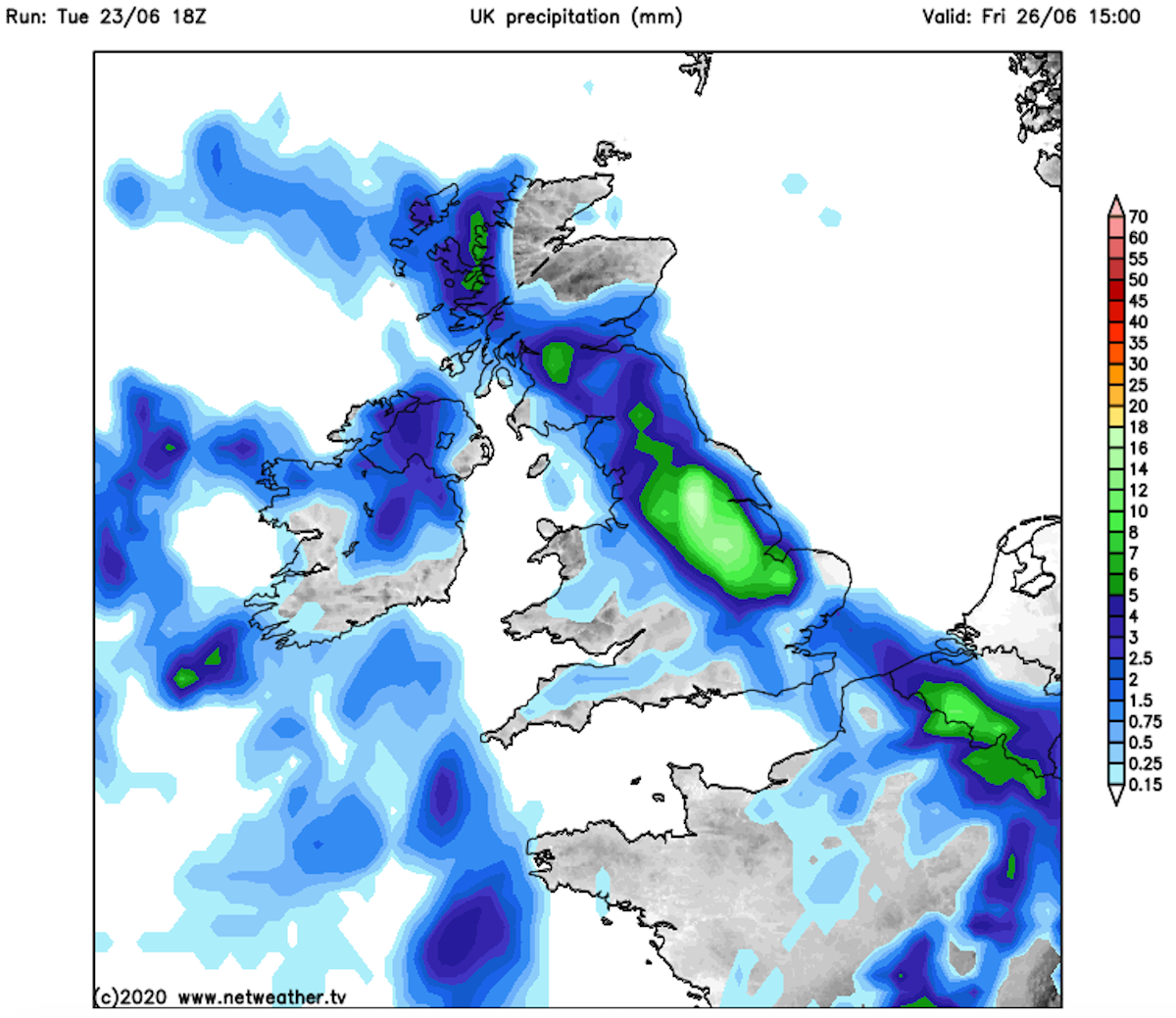 But Britons can expect a few sunny and drier spells.

The Met Office said: “The end of June will see a change of weather for much of the UK as it becomes cooler, breezier and more changeable.

“This will bring a chance of showers, especially for western parts, and also some more persistent rain, most likely through central and southern areas.”

The unsettled conditions are set to continue into early July, with sunshine, showers and longer spells of rain forecast.

BBC weather said: “Early July will continue with the same large-scale weather pattern as low-pressure areas continue to arrive from the west and northwest.

“This will mean it will continue to be rather changeable and more frequently wet and breezy for northern and western areas.”

But forecasters expect the glorious sunshine and scorching temperatures to return from mid-July.

BBC forecasters said: “However, this pattern is unlikely to last forever, and as we head into the second half of July, we should begin to see a gradual shift. 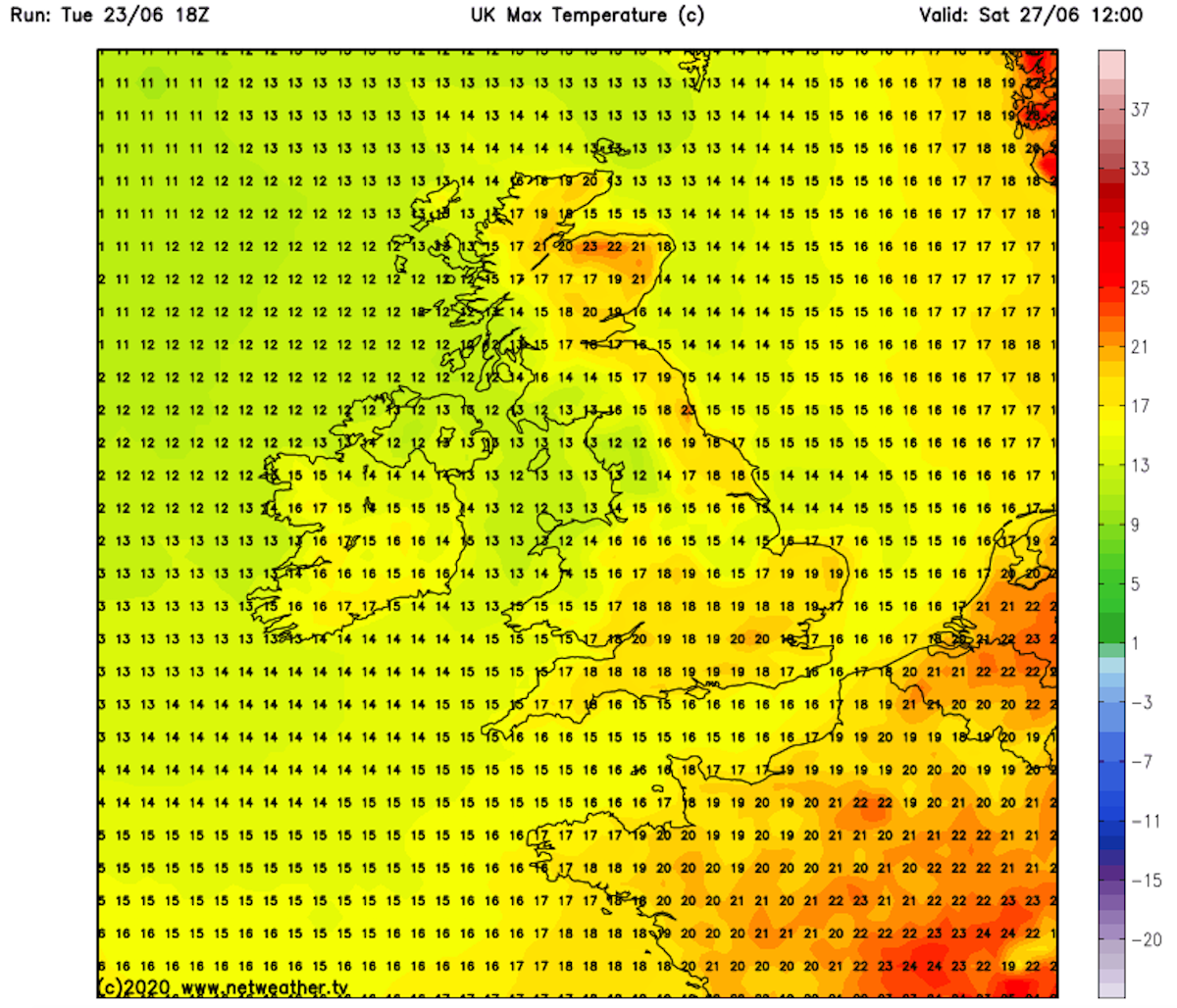 “High pressure is likely to become more influential in eastern Europe and is expected to extend into central Europe and Scandinavia too.

“This will push the low-pressure troughs into the Atlantic and slightly further away from the UK.

“What that means for the weather is that fronts will become weaker and slower-moving, and there is a greater risk for some very warm or hot southerly winds, similar to what we will see in late June.

“So, by the third full week of July we should expect a return of drier, sunnier, but hotter weather for most of the country while the western and northern fringes of Scotland cling on to some wetter weather.”

Met Officer forecasters and agree and said: “Later in the period it is possible that there will be longer, more settled spells allowing temperatures to potentially rise a little above average, perhaps becoming warm at times near the end of the period.” 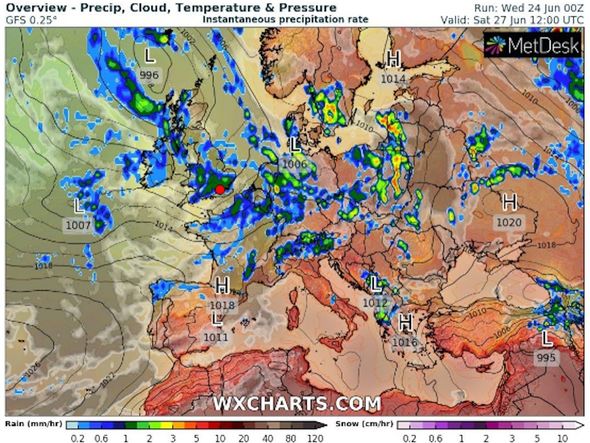