After record-breaking heat and dry conditions across much of Britain, this week sees a cold front from the Atlantic push eastwards across north Europe. Britain sees split conditions for the start of the week ahead, where the northwest is battered by wind and rain while southeast England enjoys 22C sunny spells.

Sunday is set to stay mostly dry and cloudy with milder conditions, with between 0.5-1mm/h along the west coast of Britain and Ireland.

According to WXCharts, these intermittent rain spells consolidate into a band stretching from Scotland across the midlands and east Wales to Southampton by 9am on Monday.

However as Monday evening rolls in, a plume of rain comes from the Atlantic with rain spells up to 2mm an hour hitting the west coast of Ireland.

The rainfall strengthens to 4mm an hour in some parts of Ireland, with the whole country hit at midnight on Tuesday.

By 9am, the east of Ireland and west of Britain sees between 2 to 4mm of rain an hour, before the downpours push into Britain by 3pm.

At this time, Cornwall and Wales see between 1-3mm and hour, Belfast and Manchester see 1mm/h , and Glasgow sees 2-3mm/h.

After this, rainfall becomes intermittent across Britain, but in total by midnight on Thursday, Belfast will have seen 51mm, or 2.01inches. 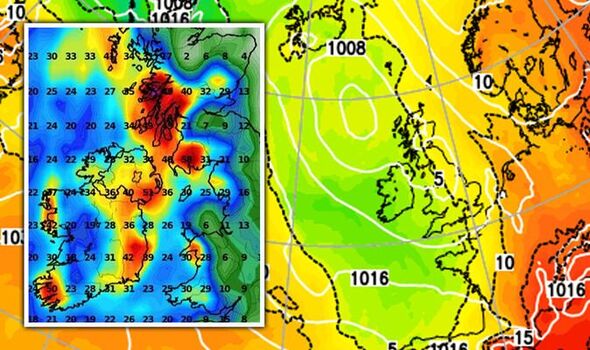 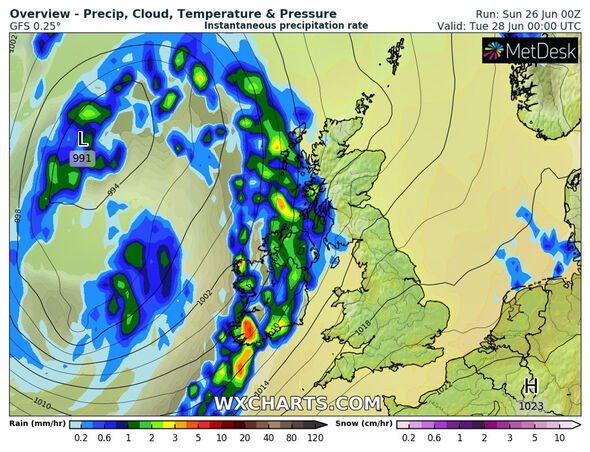 Alongside the rain on Monday evening, wind speeds pick up and begin striking the UK.

By midnight on Tuesday, winds will ease slightly in Northern Ireland to between 50 and 62km/h (31 to 38.5mph), with the Irish Sea seeing the 75km/h gusts.

After pushing past Ireland and into Britain, midday on Tuesday sees the Irish Sea, Cornwall and the Welsh coast reach heights of 89km/h (55.3mph), while most of Britain sees 50km/h.

Windspeeds settle by midnight on Wednesday, with all of the UK ranging between 29 to 39km/h (18 to 24mph).

Temperatures at midday on Tuesday vary depending on the conditions, where London enjoys 20C while Belfast sees 13C. 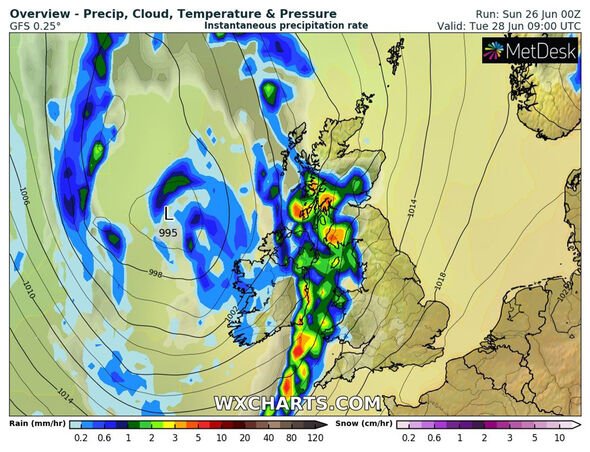 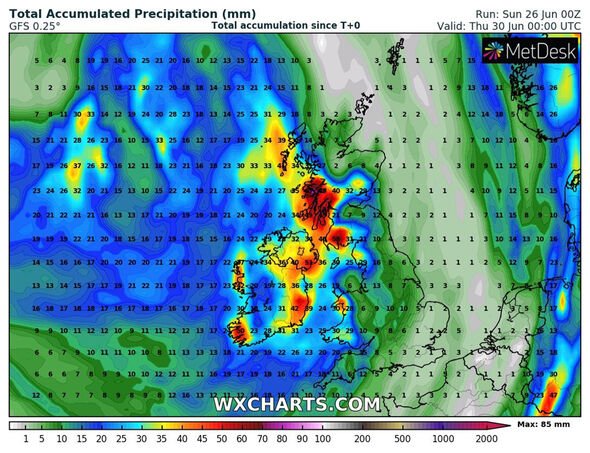 Ian Simpson, Netweather.tv forecaster, wrote for the agency’s website about Monday: “Cloudy weather and showery rain will spread eastwards through the country, turning more showery as it heads eastwards.

“There is a chance of this turning thundery in eastern England, especially East Anglia and Lincolnshire. Following behind, there will be a spell of mainly dry sunny weather spreading from the west, but it will cloud over again in Northern Ireland during the afternoon.

“By evening, Northern Ireland will be cloudy with some rain spreading from the west, but the rest of the country will become dry and sunny. Temperatures will generally be down on the previous days in eastern and central England, but will still reach 22 or 23C in parts of East Anglia and the south-east.

“The west of Scotland will again be coolest with highs of just 15 or 16C in many places.”

Princess Eugenie involved in efforts to manage Harry and Meghan 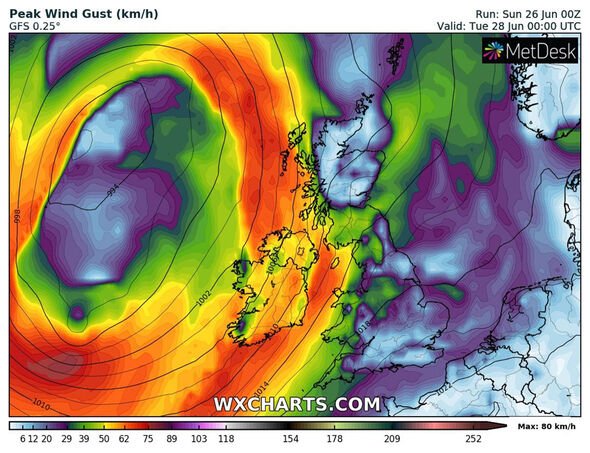 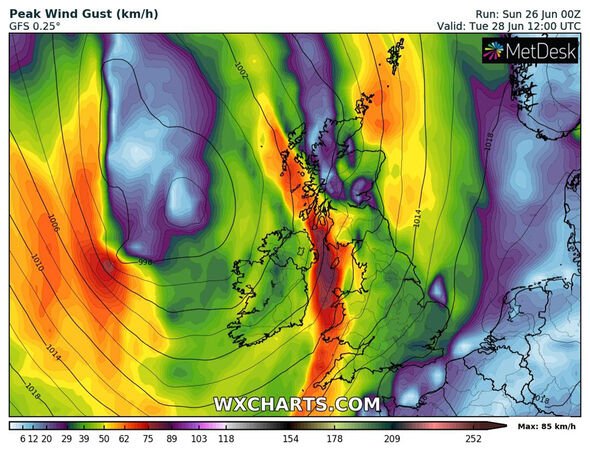 Mr Simpson continued: “On Tuesday it will become windy, and it will be cloudy in Scotland, Wales and western England with some outbreaks of rain.

“Much of eastern England, especially East Anglia, will be dry, sunny and quite warm thanks to the generally southerly winds, with widespread highs of 22 to 24C. Northern Ireland will have a day of sunshine and showers.

“The area of cloud and rain will continue to spread slowly eastwards through Tuesday night and Wednesday, probably persisting over eastern England for much of Wednesday, although rainfall amounts from this in eastern England will generally be small.

“Elsewhere there will be a mix of sunshine and showers. Some of the showers may be thundery, especially in the Midlands and the north of England.

“With a slackening area of low pressure moving slowly northwards, Thursday and Friday look set to be days of sunshine and showers for most of the country, perhaps with not so many showers in the south on Friday as high pressure starts to ridge up from the south.

“Western Scotland and Northern Ireland could be affected by some longer spells of rain at times.

“Temperatures from Wednesday to Friday will mostly be around normal for the time of year, reaching 21 to 23C in central and eastern parts of England, cooler further north and west.” 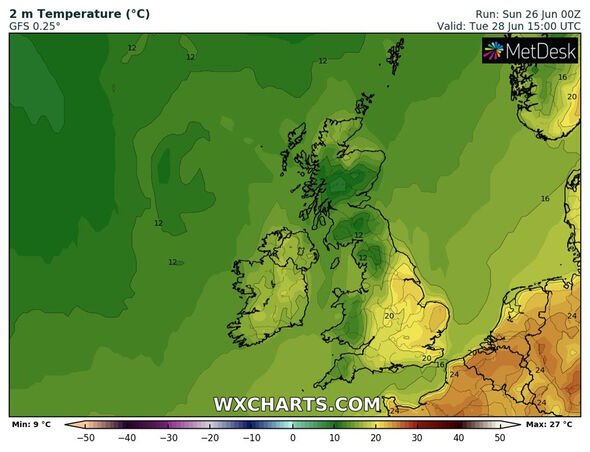 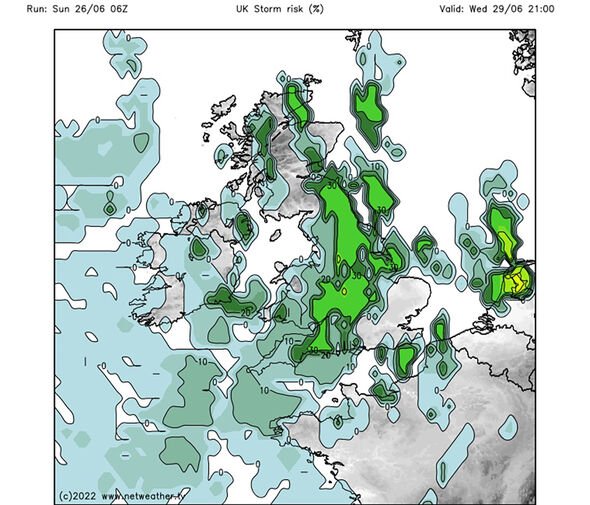 The Met Office said in its forecast through to Thursday the weather will be divided between the northwest and southeast.

For Sunday, they said: “Windy and cool across western areas with rain or showers, heavy and perhaps thundery in the northwest, especially over Northern Ireland.

“Drier in the southeast with sunny spells, and feeling quite warm. (For Sunday night) rain and showers in the west, heavy in places, edging slowly eastwards, though eastern parts remaining mostly dry with clear spells.”

For Monday, they said: “Bands of rain or showers moving eastwards across many parts, heavy in the east with a chance of thunder in the afternoon. Drier and brighter in the west later.

The Met Office then added in its outlook from Tuesday to Thursday: “Rain arriving into the West on Tuesday, fragmenting into showers by Wednesday, mainly dry elsewhere.

“Warm by Wednesday. Perhaps some thundery rain in the east on Thursday.”