According to latest forecasts from WX Charts, around 113mm of rain is expected to fall from Wednesday as frosty nights and cold days are expected to arrive. Forecasts to November 14 predict an Atlantic storm to batter the country.

Charts from NetWeather show the entire country turn blue as rain is set to batter the country as autumn gets well underway.

The BBC’s prediction spanning from Monday November 16 to Sunday November 29 forecasts “warmth lingering” before “a chance of colder air later”.

It also warns of “the potential for wintry showers” in cold days and even lower temperatures in the evening. 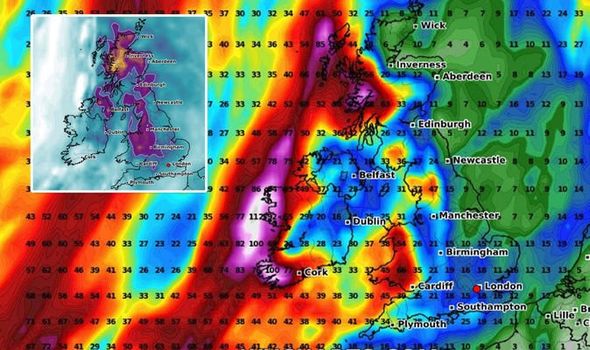 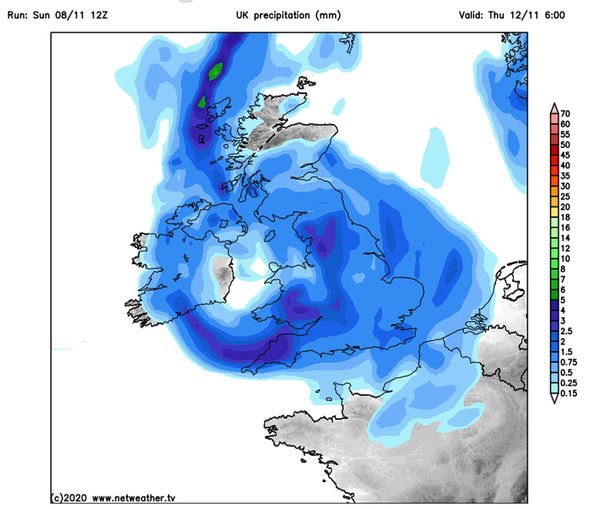 In their forecast today, the BBC said: “Low pressure systems should be steered southwards over Scandinavia and eastern Europe, pulling down pulses of colder air towards the UK.

“This increases the likelihood for some frosty nights, cold days and the potential for wintry showers but brief, milder, wet and windy spells in between.

“There are a couple of possible alternate scenarios.

“One is that the Polar Vortex remains strong and induces more of a westerly regime with low pressure systems bringing occasionally wet and windy but mild weather across the UK. 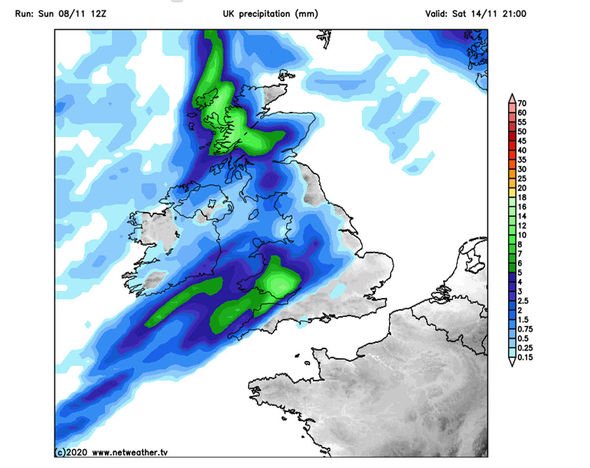 “This is about a 30 percent chance.

“On the other hand, there is a very small risk, no more than 10 percent, of high pressure building over Scandinavia and bringing much colder easterly winds.”

In a video on their Twitter account, the Met Office forecast for Monday states: “A few weak fronts will move northeastwards across the UK on Monday.

“Extensive hill fog to start, some brightness. Showery rain from the southwest. 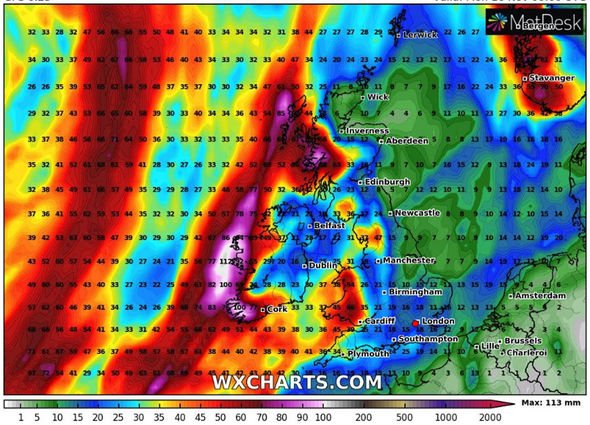 “A chilly start towards the northeast. Otherwise mild again, for the time of year.”

The Met Office outlook for Tuesday to Thursday states: “Rather unsettled. Often cloudy with patchy rain on Tuesday.

“Windier Wednesday with some rain, but sunny spells and a few showers for Thursday. Remaining mild.”

December is expected to bring with “wintery precipitation”. 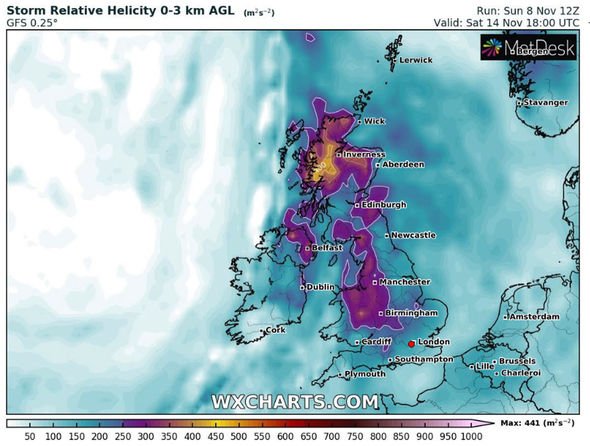 In the Met Office long-range forecast, it stated: “The end of November is likely to be generally settled with high pressure set to dominate.

“However, occasional unsettled periods do remain possible although likely to be short-lived and mostly affecting further west and north of the UK.

“Temperatures are probably remaining mild before possibly turning colder than average into December with risks of overnight frosts.

“The chance of wintery precipitation could also be increasing into December, notably for northern higher ground.”