Britain is currently experiencing a cold snap with a blast of Arctic air bringing freezing conditions and snow to parts of the country. Conditions will warm up somewhat on Thursday and Friday before another surge of Arctic air causes them to plummet again over the weekend.

According to XWCharts parts of central Scotland north of Edinburgh and Glasgow will see temperatures of -7C around 9am on Sunday.

Much of England and Wales will also see freezing temperatures with the mildest conditions being found in the southeast of Britain.

On Twitter, the Met Office said: “Wondering why it’s so cold? We’re still sat in Arctic air across the UK today.

“A change to milder weather arrives tonight for Thursday and Friday, bringing temperatures much closer to average. 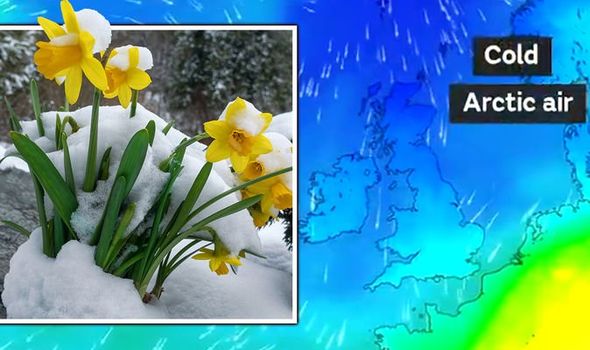 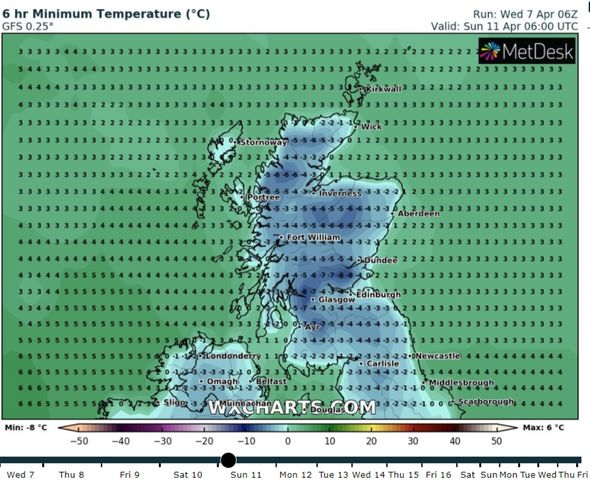 “But it doesn’t last long as by the weekend another Arctic plunge is likely.”

After some hill snow tonight he predicts: “We’re going to end up in this less cold slice of Atlantic air by Thursday.

“That’s going to give us a lot of cloud as we start off Thursday, still a potential for a touch of frost in the southern half of the UK, but on the whole a cloudy day for many. 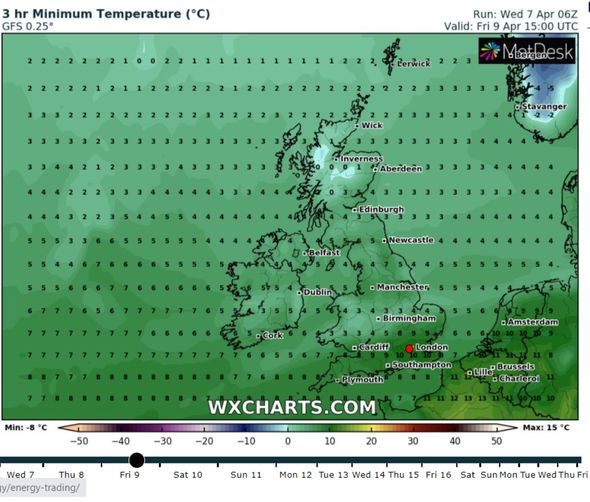 “A wet and windy day in the far north and north-west of Scotland, gales round exposed coasts, outbreaks of rain.

“Elsewhere the rain more showery in nature, mainly in the north and the west, and temperatures hitting the dizzying heights of 12C in the east of England and northeast Scotland.”

However, another patch of Arctic wind will blow into Britain from Friday night, becoming most intense over the weekend.

Mr McGivern forecasts: “Another Arctic blast to end the week. 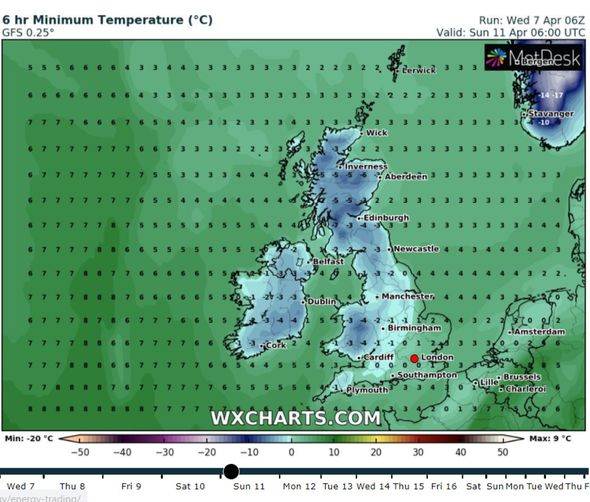 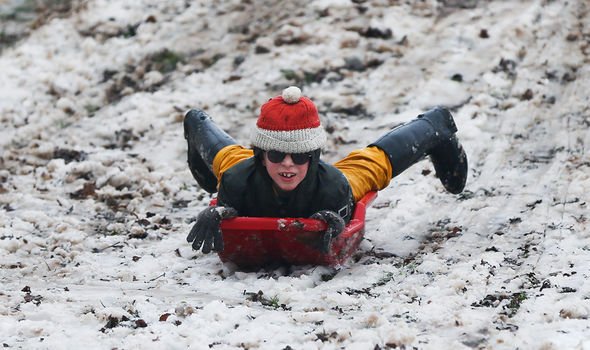 “This is going to bring a spell of rain as we start off Friday moving southwards across England and Wales, fizzling out, and then that opens the door to more wintery weather.

“Middle-single figures in the north, 10-13 [degrees] further south where this is mainly rain and it’s largely dry in the far-south.”

As temperatures fall again over the weekend some snow is likely over northern parts of Britain.

The south will remain a little warmer and should see some rain during this period.

Mr McGivern commented: “The Arctic air coming again on Friday from the far-north and, with the exception of the south of England and south Wales, much of the UK is in air which is once again cold enough for snow to be falling out of the sky.

“However any wintery showers will be of a showery nature and so for northern England, Scotland and Northern Ireland, Saturday is looking like a day of sunny spells and snow or hail showers. 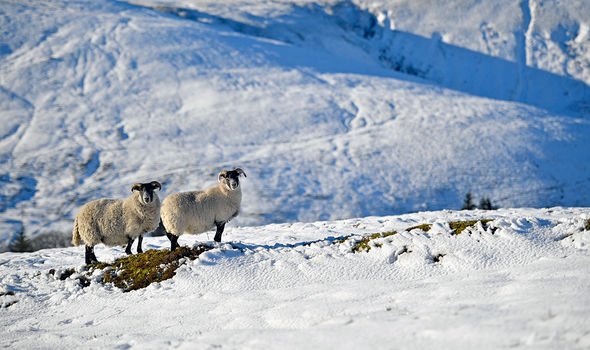 “Further south across much of the rest of England and into Wales a lot of cloud cover and some persistent rainfall for East Anglia and the southeast.

“It’s going to feel cold under those grey skies and that persistent rain, the best of any brightness towards the northwest.

“And as we head into Saturday night another weather front’s coming in from the northwest but it’s coming in on top of high pressure which is extending across the UK and as a result a lot of fine weather through Sunday, a dry and bright day for many.”