Low pressure from the Atlantic will sweep across the UK on Sunday, where it will mix with high pressure already in the south. The latest hot weather maps from Netweather show scorching highs to linger in the south east until next Thursday. The south east will see 30C from Monday, with warmer air pushing up as far north as Newcastle. Jo Farrow at Netweather added some parts will also see 31C.

She said: “Monday and Tuesday should be very warm with temperatures throughout the UK lifting, 31C is possible.”

The latest forecast on Netweather added temperatures will rocket after a weekend of rain in central and eastern regions.

It said: “The weekend is looking mixed. Through Saturday a band of cloud pushes down across southern and central regions.

“It could bring a few spots of rain but brighter conditions follow it. In northern and western Scotland spells of rain are likely. 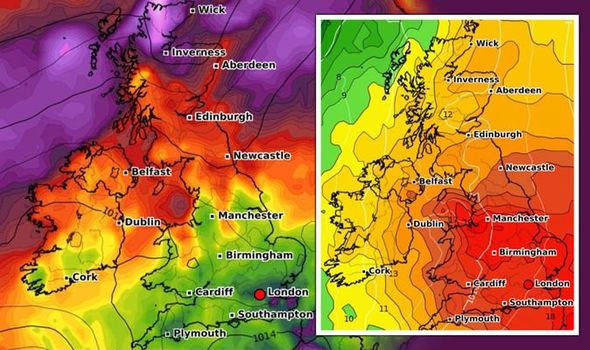 “On Sunday patchy rain is possible in the north west. Other areas remain dry.

“Early next week temperatures continue to rise across England.

“In central and eastern counties 30C (86F) could be reached.” 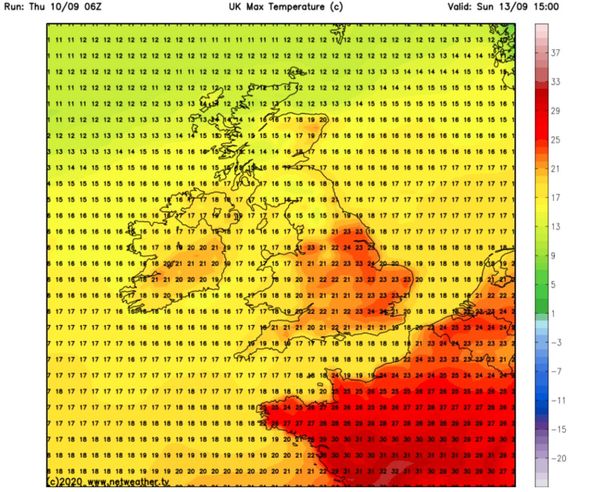 Maps from WXCHARTS show shades of orange and red swirling towards the UK from a westerly direction from the Atlantic.

But before the hot weather arrives, this weekend will be filled with rain bettering the UK.

Ms Farrow said: “Saturday could start off grey with some dampness for SW England and English Channel coasts as the last of the frontal cloud fades during the morning.

“For many, it will be yet another fair day, with warm sunny spells but a coolness in the shade or breeze. 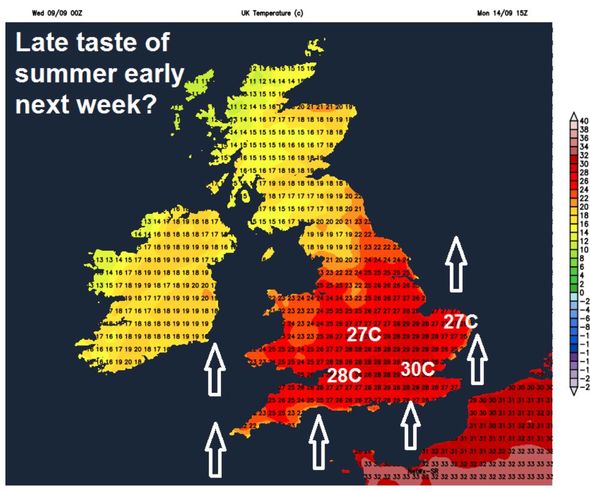 “The northern half of the UK keeps the blustery westerly winds with a scattering of heavy, even thundery showers affecting the north of Northern Ireland and western Scotland including Glasgow.

“Later in the day, the Atlantic front begins to head in, bringing heavy rain and strengthening winds, backing as it arrives for Northern Ireland and western Scotland.

“Also windy through the Irish Sea on Saturday night.” 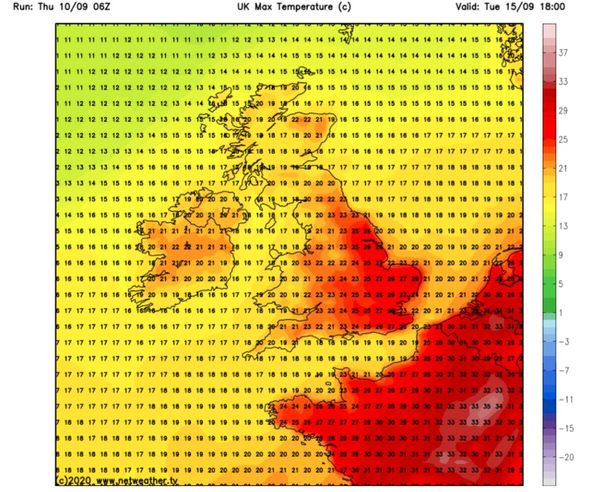 The Met Office has also issued two yellow warnings for rain over the weekend in western Scotland.

The warnings will last from 6pm on Saturday to midnight on Sunday and affect areas including Fort William.

The Met Office said: “A band of heavy and persistent rain will arrive across western Scotland during Saturday evening, and continue through much of Sunday.

“Many places in the highlighted region will see 25-50 mm of rainfall. 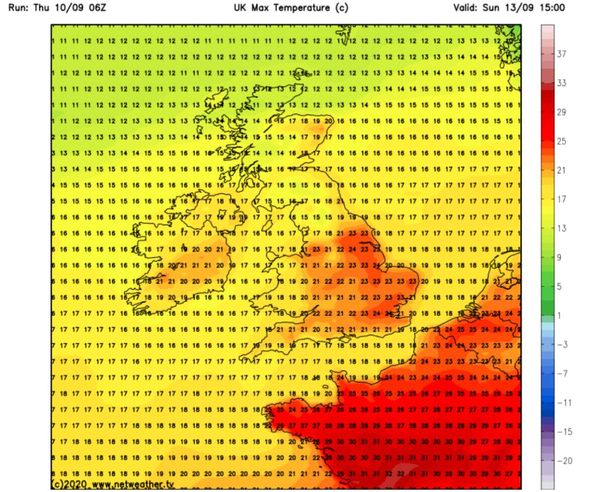 “However, over the hills and mountains, peak totals of 120-160 mm are likely during this time.

“In association with the rainfall, there will be a period of strong southwesterly winds.

“These are not expected to be overly impactful, they may make travelling conditions more challenging in places.”