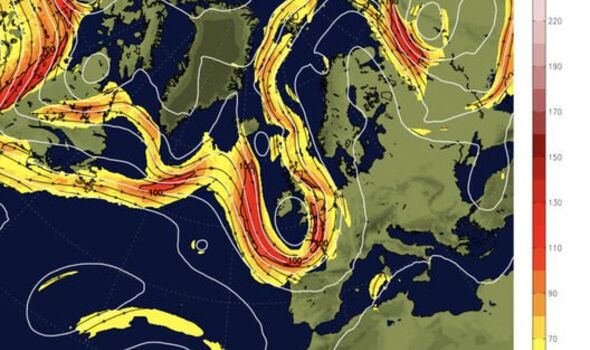 Western regions are in the firing line for the worst of the deluge through the next couple of days before showers spread nationwide.

South-eastern England, including London, will cling to higher temperatures while the mercury elsewhere plumets.

The threat of rain in the capital later this week means that after a dry start, tennis fans could face a Wimbledon washout.

The change in weather after a fortnight of scorching, largely dry and settled conditions will be triggered by a sudden twist in the jet stream.

Met Office meteorologist Alex Deakin said: “We are seeing a shift in the jet stream.”

“It is currently to the north of the UK, but it is shifting south, buckling and changing its orientation.”

“We call this a more amplified weather pattern.” 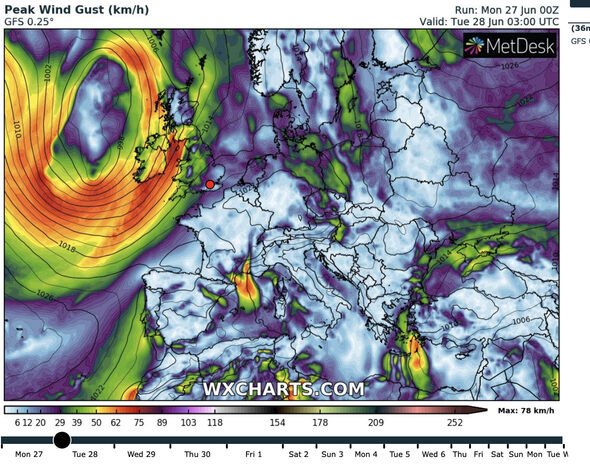 This change will cause unsettled weather systems to slow as they cross the UK bringing longer periods of rain.

Britain’s weather will be given an extra rinse by low pressure churning off the west coast.

Two low-pressure systems will drive wet and windy weather–one which was established at the weekend and a second to follow this week.

“It looks like we will get the same pattern setting up next week just with a different low-pressure system.”

“But again, we get that dip in the jet stream so low pressure will become slow-moving.”

Showers may turn heavy, windy and thundery as the second Atlantic low sweeps in from the Atlantic.

Maximum temperatures will drop into the high teens across swathes of the UK with just the southeast lifting into the low-20Cs.

Exacta Weather’s James Madden said: “The warm weather of the past couple of weeks is going to give way to something more unsettled and cooler towards the end of the month.

“Unsettled weather could continue for several days, and there will be a risk of a potentially thundery breakdown for many parts of the country.” 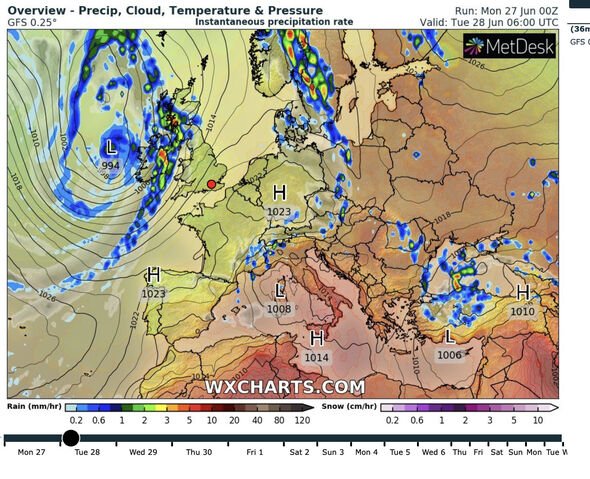 Netweather’s Ian Simpson added: “On Tuesday it will become windy, and it will be cloudy in Scotland, Wales and western England with some outbreaks of rain.”

“Much of eastern England, especially East Anglia, will be dry, sunny and quite warm thanks to the generally southerly winds, with widespread highs of 22C to 24C.” Britain faces at least several days of cooler, wetter weather before the warmth shows signs of returning.”

The Met Office’s Alex Deakin said: “Temperatures are not likely to exceed 25C on Monday and Tuesday with colder air in place.”

“But as we look further ahead Thursday and Friday, there’s a signal for probabilities rising for temperatures to rise.”

“Eastern areas are more likely with south-westerly winds to see those temperatures if we see some sunshine getting up high once more.”

However, heat-lovers hoping for another blistering Saharan blast may be disappointed.

Weathertrending meteorologist John Hammond said: “While there’s a chance that some warmth may briefly be sucked up from the south, I see no prospect of heat on the scale that some have seen earlier this month.”